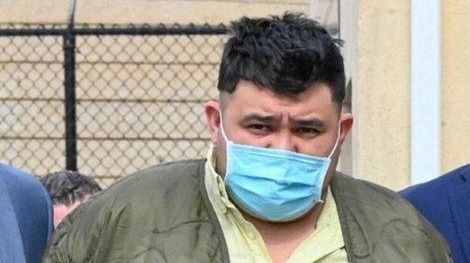 Oscar Rios Perez, 37, was charged with second-degree murder after being accused of fatally stabbing his roommate last month and leaving the victim's body in a plastic bag in front of a neighbor's Uniondale home, according to Nassau County police. Newsday's Cecilia Dowd reports. Credit: Howard Schnapp

A man was charged with second-degree murder after being accused of fatally stabbing his roommate last month and leaving the victim's body in a plastic bag in front of a neighbor's Uniondale home, Nassau police said Tuesday.

The suspect, who police said uses multiple names and was charged as Oscar Rios Perez, 37, killed roommate Jesus Martinez during a drunken argument, Lt. Stephen Fitzpatrick, the commander of the Nasssu police homicide unit, said Tuesday during a news conference in Mineola.

Perez fled from New York to Texas after leaving the body of Martinez, 27, in front of a home near the Walton Avenue residence Perez shared with the victim, officials said. The body was discovered at about 10 a.m. on Jan. 30.

Neighbor Maria Veras said she saw the bag outside that morning but assumed it was garbage. "I never thought it was a body," Veras said.

Perez was arraigned virtually Tuesday before Nassau Justice Jerome Murphy, who ordered the suspect held without bail. Perez is scheduled to return to court on March 9. His attorney, William Shanahan of Mineola, did not immediately return a call for comment.

Perez, a native of El Salvador, was arrested while boarding a bus headed to Mexico when he was apprehended in Austin, Texas, Fitzpatrick said.

"He was arrested at that time," Fitzpatrick said. "When we fingerprinted him then, in Austin, Texas, his identity popped as Alexis A. Floures, wanted for assault second (degree) here in Hempstead."

Fitzpatrick said Perez was convicted of assault about 10 years ago and deported after his release from prison. He tried to reenter the United States in 2019 but was denied because of the felony conviction.

Perez returned to Uniondale and adopted a new name and identification after that, Fitzpatrick said.

Authorities said they are trying to ascertain the suspect’s real name.