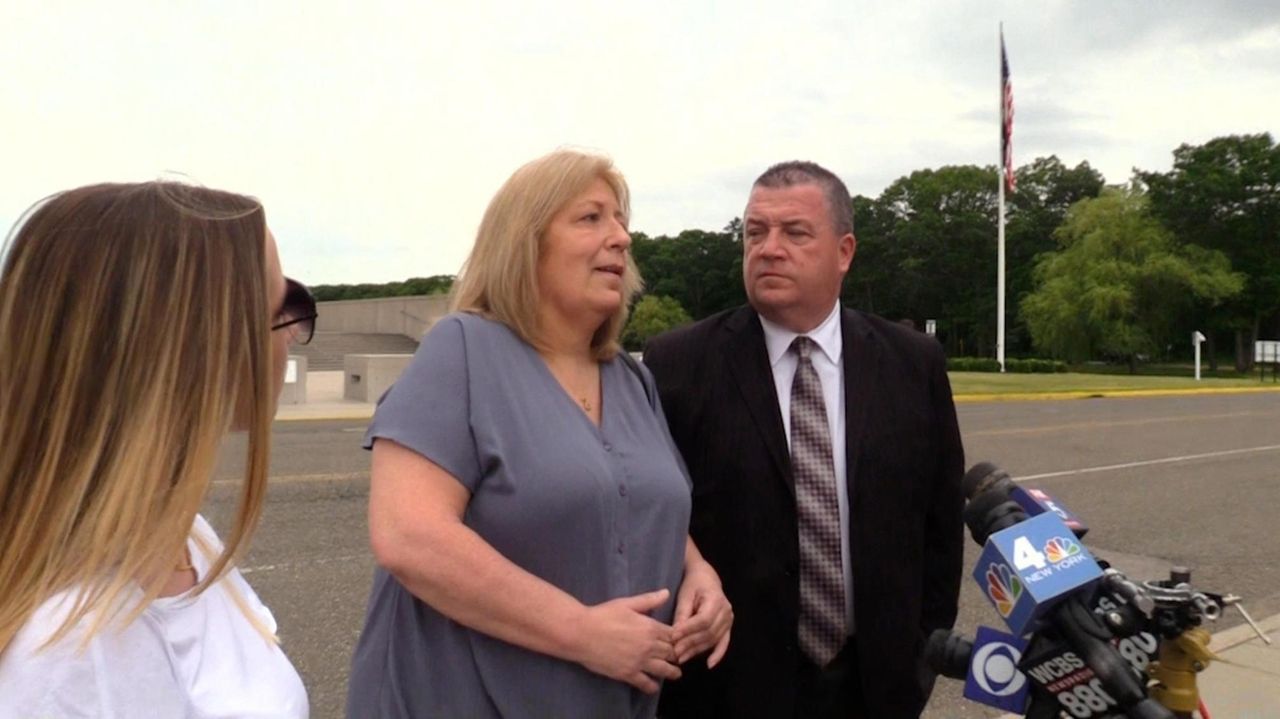 On Monday, a judge delayed ruling whether to release on bail NYPD Officer Valerie Cincinelli of Oceanside, who has been charged in a murder-for-hire plot, until she reviews all the government's audio, video and text records in the case. Mary Ann Roach, the mother of Cincinelli’s estranged husband, spoke about the case. Credit: James Carbone

A federal judge said Monday that she would not decide whether to release on bail a longtime New York City police officer from Oceanside, charged in a murder-for-hire plot, until she reviews all the government's audio, video and text records in the case.

U.S. District Judge Sandra Feuerstein, in federal court in Central Islip, issued her ruling after both federal prosecutors and a defense attorney had argued that excerpts of the material they planned to introduce at Monday’s scheduled bail hearing for Valerie Cincinelli would support their positions.

But Feuerstein said that the “snippets” of the material each side wanted to introduce in court might not reflect the entire picture required for her to render a fair decision on bail.

The start of the bail hearing was further complicated because the excerpts the defense tried to introduce were inaudible when played in the courtroom.

Cincinelli, 34, a 12-year veteran of the NYPD, was arrested in May on charges of seeking to hire a hit man to murder both her estranged husband and the teenage daughter of her boyfriend.

Cincinelli has been held without bail after pleading not guilty to two counts of murder for hire and one count of obstruction of justice, according to the indictment filed in federal court in Central Islip.

The obstruction count involves Cincinelli’s alleged attempt to destroy two cellphones and the records they contain to impede the investigation, the indictment says.

A key person who led to Cincinelli’s arrest was identified in court papers only as CS, for confidential source. The source was “romantically involved” with Cincinelli, although one of the two would-be victims of the murder scheme was his teenage daughter, prosecutors said in the court papers.

Cincinelli’s defense attorney, James Kousouros of Manhattan, initially told the judge that Cincinelli was concerned that if she was not released on bail that she might begin to be harassed by other inmates in general population because she is a police officer. But he later said his client decided not to request a transfer to solitary confinement because her children would not be able to visit her.

Eastern District federal prosecutor Catherine Mirabile said if released on bail Cincinelli would be a danger to the community and would violate bail conditions.

“If there is anyone who [knows how to] get around the system it is a police officer,” Mirabile said, adding that Cincinelli had a “pecuniary interest” in the crimes. Cincinelli had been contesting her estranged husband’s attempt to get a portion of her police pension in a divorce settlement, prosecutors said, and believed her boyfriend was spending too much money on his teenage daughter.

Both all the boyfriend’s  attention and money, Cincinelli believed, should go to her and her children, said Mirabile, who is prosecuting the case along with Lara Treinis Gatz.

But Kousouros said that his client had been on the verge of a financial settlement in the divorce and the amount of money the boyfriend spent on his daughter was minimal.

If convicted of murder for hire, Cincinelli could face up to 10 years on each count; obstruction of justice carries a penalty of up to 20 years in prison.

Cincinelli joined the NYPD in 2007 but has been on modified assignment without a gun since 2017 because of domestic incidents, an NYPD spokesman has said.

Cincinelli had been working with the Viper unit, which monitors surveillance cameras at city public housing areas. Before that she had worked in the 106th Precinct in Queens, the spokesman has said.