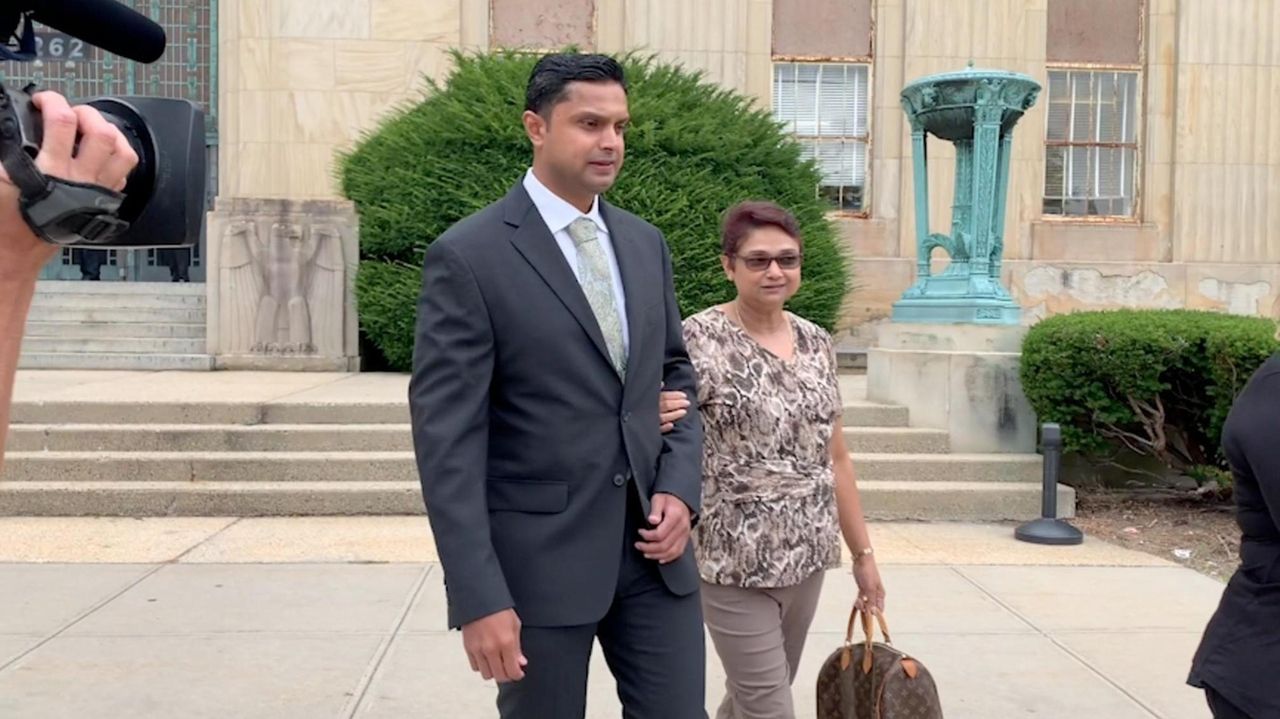 On Friday, a military veteran who brought a Nassau police officer's career to a possibly permanent halt in a holiday drunken driving crash sobbed in court when the officer said he believed something good could come from their life-changing encounter. Credit: Howard Schnapp

A military veteran who brought a Nassau police officer's career to a possibly permanent halt in a holiday drunken driving crash sobbed in court Friday when the cop said he believed something good could come from their life-changing encounter.

“I’m confident in the fact that you choosing to take responsibility for your actions shows that you can be successful in turning your life around,” Officer Willard Gomes told Keith Dillon, 30, of New Hyde Park, before a judge sentenced Dillon to 6 to 12 years in prison.

In May, Dillon pleaded guilty to aggravated vehicular assault, assault and drunken driving in connection with the crash in Greenvale at about 2:30 a.m. on Jan. 1, 2018.

The officer’s car struck another vehicle and he became trapped in the wreckage for 40 minutes as rescuers worked to extricate him following the collision that prosecutors said crushed the left side of his body.

Gomes suffered a brain bleed, a broken vertebra in his neck, a shattered elbow, a broken leg, an orbital bone fracture and the loss of several teeth.

“A young police officer sits with his family and his brother officers unable to perform a job he loves so dearly because of Keith Dillon, because of the choices that Keith Dillon made,” Palma told acting state Supreme Court Justice William O’Brien. “Officer Gomes is the one that will pay the price for those bad decisions for the rest of his life.”

But Gomes, a U.S. Army veteran who immigrated to the United States from India at age 16, also told Dillon he didn’t hold a grudge against him for causing injuries that led him to undergo multiple surgeries and months of rehabilitation — with even more ahead.

“I do not hold any animosity toward you … I do feel justice has been served in this criminal case,” the officer said, as fellow cops, including Nassau Police Commissioner Patrick Ryder, filled one side of the Mineola courtroom.

“I believe that something positive can come out of my misfortune,” Gomes continued.

Tears streamed down Dillon’s face as he sat with his attorney, Marc Gann, and looked toward the officer, who was speaking several feet away at a lectern.

“I honestly wish you all the best in everything moving forward,” Gomes said as he finished his victim impact statement.

Dillon, whose family filled the other side of the courtroom, later stood to address Gomes, his voice emphatic but trembling.

“From the bottom of my heart, I’m deeply sorry for my selfish, reckless actions that night … I hope that through all this, and as you said … that I can make it out on the other side of this and turn my life around and do some good.”

Dillon added: “I just hope that one day you can forgive me for all the pain I’ve caused."

The police commissioner said outside the courthouse later that he was “humbled” by what the officer said to Dillon.

“The words he just spoke in that courtroom make you break down a little bit and realize how sensitive life is and how precious it is,” Ryder said, reflecting on the officer’s forgiveness.

Nassau District Attorney Madeline Singas said Dillon’s sentence was "entirely appropriate for the severity of this crime,” and said the incident should be “fair warning” for anyone who decides to drink and drive that prosecution will follow.

Gomes, who remains on medical leave, said he dreams of someday being able to return to the police force.

"I'll do anything it takes," he said.

Veteran pleads guilty in drunken driving crashA military veteran admitted injuring a Nassau police officer who was working a New Year's DWI patrol in a drunken driving crash that so far has left the patrolman unable to return to duty. Crime in Nassau and Suffolk, 2006-2017 There were 35,503 violent or property crimes recorded on Long Island in 2017 by the state's Division of Criminal Justice Statistics, a 5.7 percent decrease from 2016.