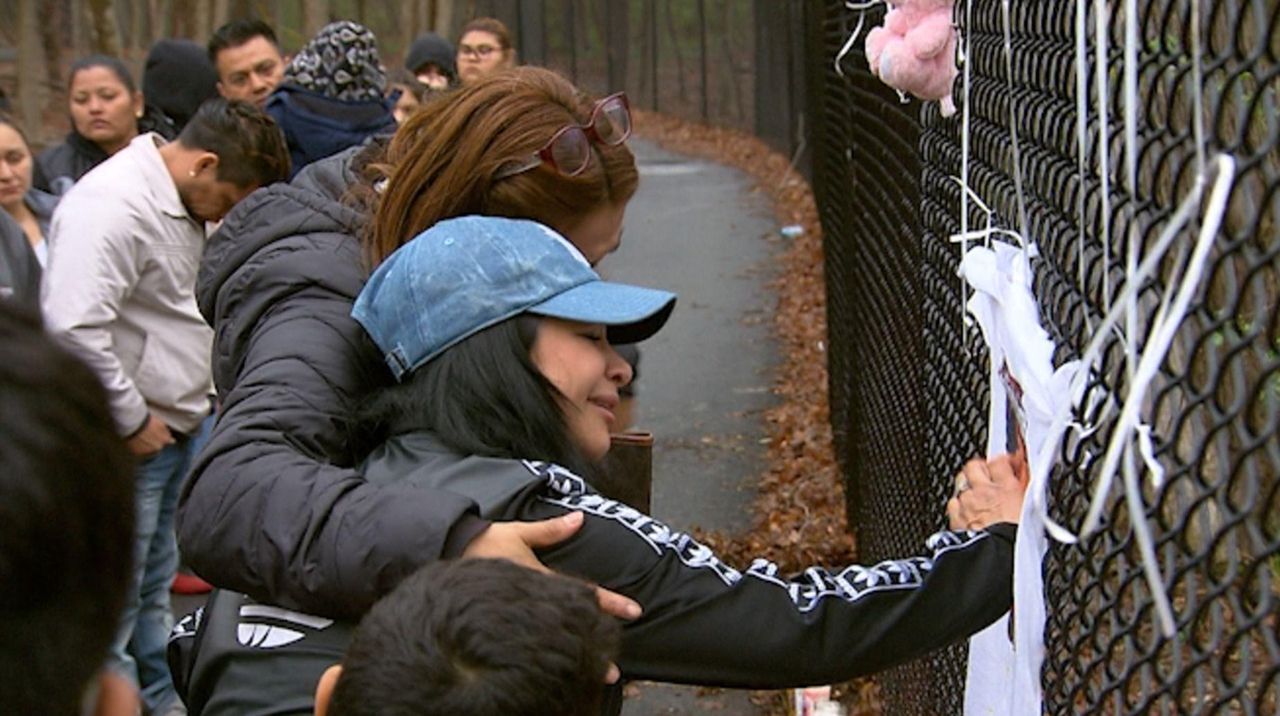 Mourners gathered at the park across Central Islip Recreation Center on Saturday, April 22, 2017, to honor Michael Lopez Banegas, one of the four young men found slain there on April 12. The vigil was held at the same time Banegas, 20, was buried in his hometown in Honduras. Credit: News 12 Long Island

As Michael Lopez Banegas, one of four young men found slain last week in a Central Islip park, was buried in his native country of Honduras on Saturday, loved ones held a vigil, just a short walk from where his body was found.

The body of the 20-year-old arrived in his hometown of Santa Rita, Yoro, on Friday and burial was set for 3 p.m. Saturday, family said.

At the same time, as many as 60 mourners gathered in the park across from the Central Islip Recreation Center, near Clayton Street and Lowell Avenue, about 100 yards from where the bodies were discovered.

“The pain I feel is tremendous,” said Banegas’ father, Carlos Lopez. “But I’m trying to smile. I can’t let myself fall apart. I still have a family to take care of.”

The Amtrak worker said he has two sons and a daughter, all three of whom were in Honduras for their brother’s burial.

“Thankfully, I have my family here,” Lopez said.

The bodies of Banegas and three other young men were found April 12. Suffolk County police say the brutal killings were the work of the MS-13 gang, which has been linked to similar slayings in the Brentwood area.

The other victims were Justin Llivicura, 16, of East Patchogue, Jorge Tigre, 18, of Bellport, and Jefferson Villalobos, 18, of Pompano Beach, Florida.

The quadruple slayings occurred about six weeks after a half-dozen MS-13 members were charged in a federal indictment in the deaths of Brentwood teens Kayla Cuevas and Nisa Mickens. The indictment, which claims the girls were attacked by gang members armed with baseball bats and machetes, also alleges MS-13 killed fellow gang member Jose Peña-Hernandez.

Suffolk Police Commissioner Timothy Sini has vowed to bring the killers of the four young men to justice and said law-enforcement is working to “eradicate” MS-13 from Central Islip, Brentwood and neighboring communities.

Suffolk police are working closely with the FBI and the U.S. attorney’s office to solve the case, Sini said.

At the vigil, a row of lit religious candles lined the edge of a gate where a white T-shirt said, “You will forever be in our hearts.”

“We know the kid was in the wrong place at the wrong time. We don’t wish anyone harm. We leave it to God to judge,” said Banegas’ uncle Luis Banegas. “Each one has to carry what they did to him on their conscience.”