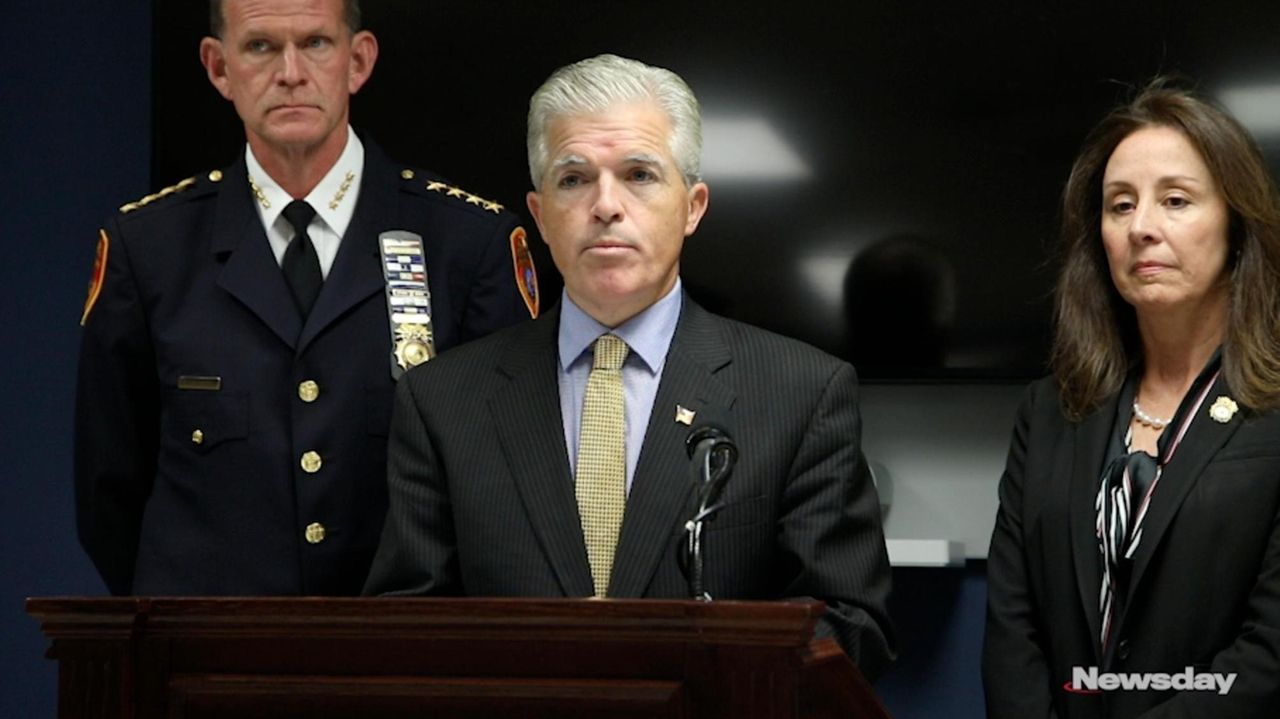 Suffolk County officials on Monday talked about the county's crime figures for the first nine months of the year. Credit: Barry Sloan

The Suffolk County Police Department has recorded 21 homicides this year, putting the county on track to surpass last year's total killings — even as violent and property crimes have dropped a total of 4.6 percent.

Suffolk County Police Commissioner Geraldine Hart stressed that nine of the 21 killings this year stemmed from domestic disputes, including three murder-suicides. Last year at this time, the county had recorded 18 homicides, or 16.7 percent fewer homicides than at the same point this year.

Fifteen of the 2018 homicides have been closed or cleared by arrest, according to police, and there are six cases that are still active.

Hart also confirmed for the first time publicly that police believe MS-13 is responsible for the August fatal shooting of a 15-year-old boy in a wooded area in Central Islip. Hart had previously said the killing was gang-related. She did not elaborate Monday.

The killing marks the first homicide linked to MS-13 in Suffolk since four teenage boys were killed with machetes in a Central Islip park in April 2017.

The commissioner disclosed the homicide numbers at a news conference with Suffolk County Executive Steve Bellone to announce drops in violent and property crime, which have decreased together 4.6 percent in the first nine months of this year over the same time period last year, Hart said.

"Crime in Suffolk County has decreased significantly in recent years and we are continuing to drive down crime in 2019," Hart said.

“It’s important to remember that these reductions are on top of historic reductions in 2018," said Hart, adding that police have "a handle" on homicides. "When crime is already so low, it is challenging to continue to drive these crimes down further, but that is our goal and we continue to be successful."

Bellone, in attempting to explain the homicide numbers, emphasized that the numbers are at “historic low levels." But Bellone said killings stemming from domestic situations are tougher for police to prevent, pointing to the Medford mother accused of killing her twin daughters in June.

"Those are the least able to be impacted by direct police work when you have domestic incidents like that,” Bellone said. “When you have a mother who murders her two children, there's not much the Suffolk County Police Department can do about that."

Through Sept. 30 this year, violent crime fell 5.6 percent, according to department statistics. In addition to homicides, aggravated assaults are also up 3.7 percent.

But robberies are down 26.8 percent. This year, there have been 202 robberies reported, while there were 276 last year. Rapes are also down 2.8 percent with 137 reported this year and 141 reported last year.

Property crime has dropped 4.5 percent so far this year, according to department statistics. Burglaries dropped from 738 last year to 661 this year. Larcenies decreased 4 percent from the 10,139 reported in 2018 to 9,734 this year. And car thefts decreased 6.3 percent.

Meanwhile, Nassau County police have recorded 15 homicides this year. Six of the 15 occurred in the Village of Hempstead. In 2018, the police investigated 17 homicides in Nassau County.

Hart said police in Suffolk have had success at reducing most crime with its tried-and-true approaches: using the department's Real Time Crime Center to track and map patterns, distributing intelligence across the department, directing resources to areas where crimes are occurring coupled with community outreach.

"What is clear is that the Suffolk County Police Department is continuing to take a very aggressive approach when it comes to combating crime and going after criminals," Bellone said. "Drug warrants are up, seizures are up. We’re taking more guns and drugs off the street from criminals and we’re seeing that reflected in crime stats."

So far this year, Suffolk police have seized 64 illegal guns and 94 rifles using its FAST and Special Operations teams, Hart said. The number of search warrants executed this year — 235 — are up four percent, Hart said, resulting in 360 arrests.

The department also has seized $1.5 million in narcotics and over $1 million in cash related to the drug sales, she said.

Officials: Crime falls 25 percent in NassauMajor crime on Long Island plummeted over a five-year period ending in 2017, with a ...