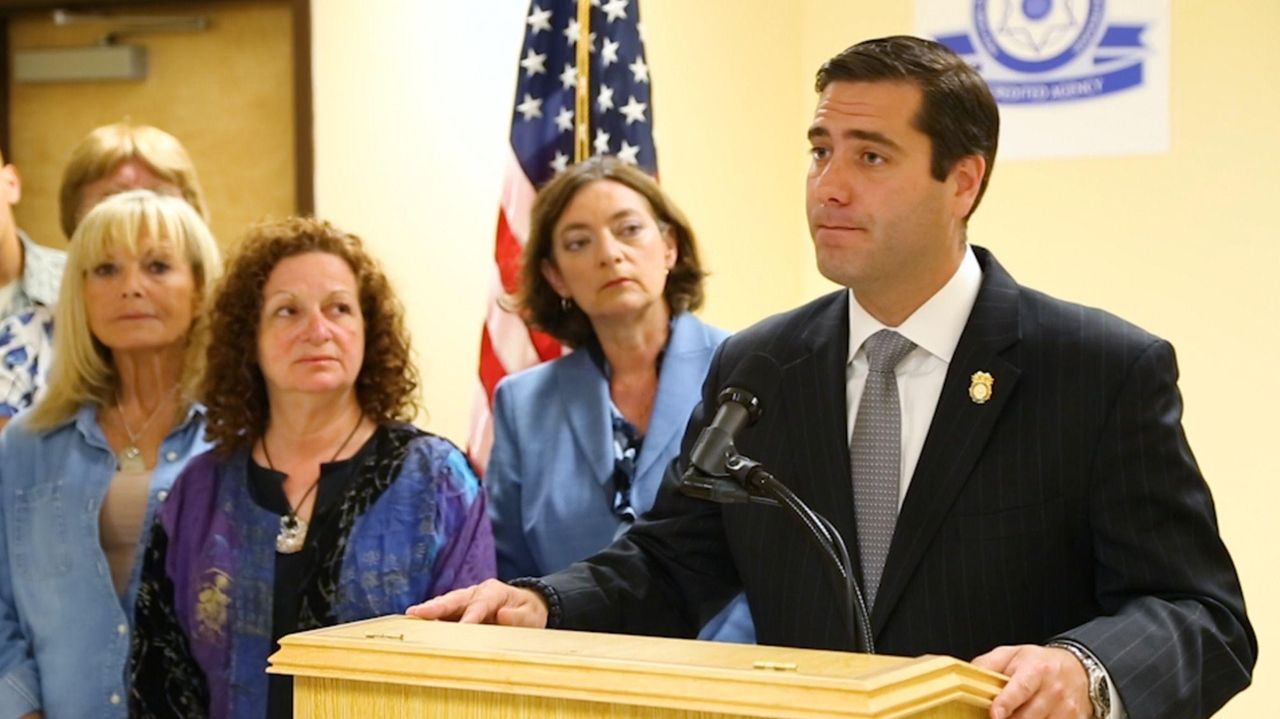 On Wednesday, June 28, 2017, Suffolk County Police Commissioner Timothy Sini held a news conference to raise awareness of the social host law, including a change that now makes serving alcohol to a minors a misdemeanor. The police department also highlighted its Cancel the Keg hotline, which residents can use to provide authorities with information about gatherings where underage drinking might occur. Credit: Barry Sloan

Suffolk County police will crack down on adults who serve alcohol to minors over the summer, when rates of underage drinking spike, officials said Wednesday.

Last year, Suffolk County strengthened its social host law — which holds adults liable for knowingly permitting underage drinking in their homes — to allow greater enforcement, police Commissioner Timothy Sini said at a news conference at police headquarters in Yaphank. The change made a first offense a misdemeanor, punishable by up to a $500 fine, rather than a violation.

Bolstering the law was an effort to prevent the emergency room visits, car accidents, deaths and other issues that result from underage drinking, Sini said.

“This is a public health issue,” he said. “We will not tolerate adults serving children alcohol. It’s that simple.”

When the first offense was a violation, an officer could not issue a summons or make an arrest unless he witnessed the underage drinking. Police could not rely on “extrinsic evidence,” such as witness statements or video surveillance, to enforce the law, Sini said.

Making a first offense a misdemeanor changed this and gave the officers “more tools in our toolbox” to enforce the law, Sini said.

Second and subsequent offenses are punishable by a maximum $1,000 fine and up to a year imprisonment.

County lawmakers voted unanimously to amend the law in June 2016.

The time between Memorial Day and Labor Day is also “the most lethal period” for teen traffic accidents, said Pamela Mizzi, director of prevention for the Suffolk County Prevention Resource Center.

Binge drinking among teens could increase the likelihood of the use of other drugs, Mizzi said.

Legis. Tom Cilmi (R-Bay Shore), who sponsored the amendment to the social host law last year, said the county’s intent is not to “lock up parents” for serving alcohol but to “send a clear message to those parents” and deter harmful behavior.

Residents can also call Suffolk County’s “Cancel the Keg” hotline to report plans for an underage drinking party, and an officer will respond to that residence to notify parents, Sini said.

“[Underage drinking] is illegal. It’s dangerous and we will not stand for it,” Cilmi said.