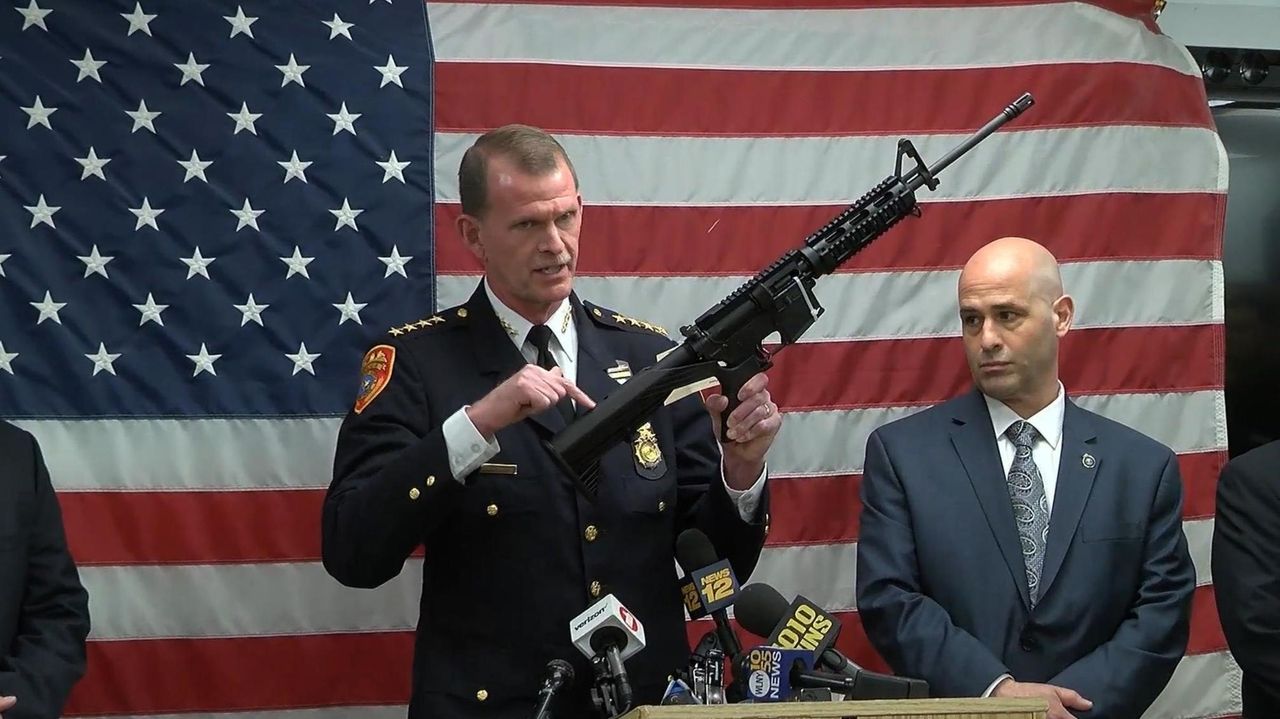 A Lindenhurst man who left a threatening phone message for an official at a Rockland County school he attended in 2002 was arrested Saturday night after nine illegal guns were found at his home, Suffolk police said Sunday. Credit: Stringer News Service

A Lindenhurst man who left a “threatening” phone message for an official at a Rockland County school he attended in 2002 was arrested Saturday night after police found nine illegal assault weapons — including a gun modified to be fully automatic — at his home, Suffolk police said Sunday.

Robert Csak, 32, who works as a pizza delivery driver, was arrested by Suffolk police officers after they executed a search warrant at his home at 495A 38th St., where they found the guns — including an assault-style weapon equipped with an illegal bump stock like the kind used in the 2017 Las Vegas mass shooting — and hundreds of high-capacity magazines and a silencer, police said.

Chief of Department Stuart Cameron, speaking during a news conference at the First Precinct in Babylon, said Csak at 5:40 a.m. on Saturday left the message on the school’s voicemail for an official who works at the Summit School in Upper Nyack, but did not threaten an attack on the school in general.

“The message was of a threatening nature to that individual,” said Cameron, who would not identify the job title of the school official. “Mr. Csak attended the Summit School in 2002 and from every indication we have now he felt slighted by this individual from an encounter back in 2002 and was carrying a grudge.”

A defense attorney for Csak could not be reached Sunday. Csak is scheduled to be arraigned at First District Court in Central Islip on Monday.

Cameron said threats involving schools have increased in Suffolk this year following the Parkland, Florida, mass shooting, adding that Csak posed “by far the most alarming threat that I have seen.”

Another Summit School employee received the message, in which police said Csak was identified as the caller through caller ID and school records, and contacted Clarkstown Police. When an officer from that department listened to the message, he was “alarmed” and thought Csak presented a “threat to himself or others,” Cameron said.

The Summit School is a residential high school for youth with emotional and social issues, according to the school’s website. Summit School officials did not respond to a message seeking comment Sunday.

Suffolk police on Saturday attempted a welfare check at Csak’s Lindenhurst home, where he lives by himself, but no one answered the door.

The landlord opened the door for police, including Officer Matias Ferreira — a former Marine and the first double amputee in the department. Officers saw the stash of guns in the apartment, which Cameron described as “very sparsely furnished” with a mattress, a plastic table and chairs, and the weapons in plain sight.

Ferreira, from his time in the military, recognized the guns as military-grade and illegal, and he and the officers “backed out” of the apartment and contacted their supervisors, Cameron said.

Police then sought a search warrant with the assistance of the Suffolk district attorney’s office for the apartment. The Suffolk police bomb squad was brought in after police found a hand grenade that was determined to be “inert,” Cameron said.

Among the weapons seized from Csak’s home by police were 19 long guns, nine of which are illegal under New York State’s SAFE ACT because they have capacity for a detachable magazine and either a rear or forward pistol grip, Cameron said.

Cameron said Csak has no criminal record and had no weapons on him at the time of his arrest.

State Sen. John Brooks who introduced legislation to ban bump stocks in New York — the devices are illegal if attached to a gun, but their possession is not outright banned — said this case points to the importance of passing a complete prohibition on bump stocks.

“We really have to close that loophole and make it illegal to have possession,” said Brooks (D-Seaford). “I want to congratulate the Suffolk police for the outstanding job that they did in securing these weapons before something happened.”