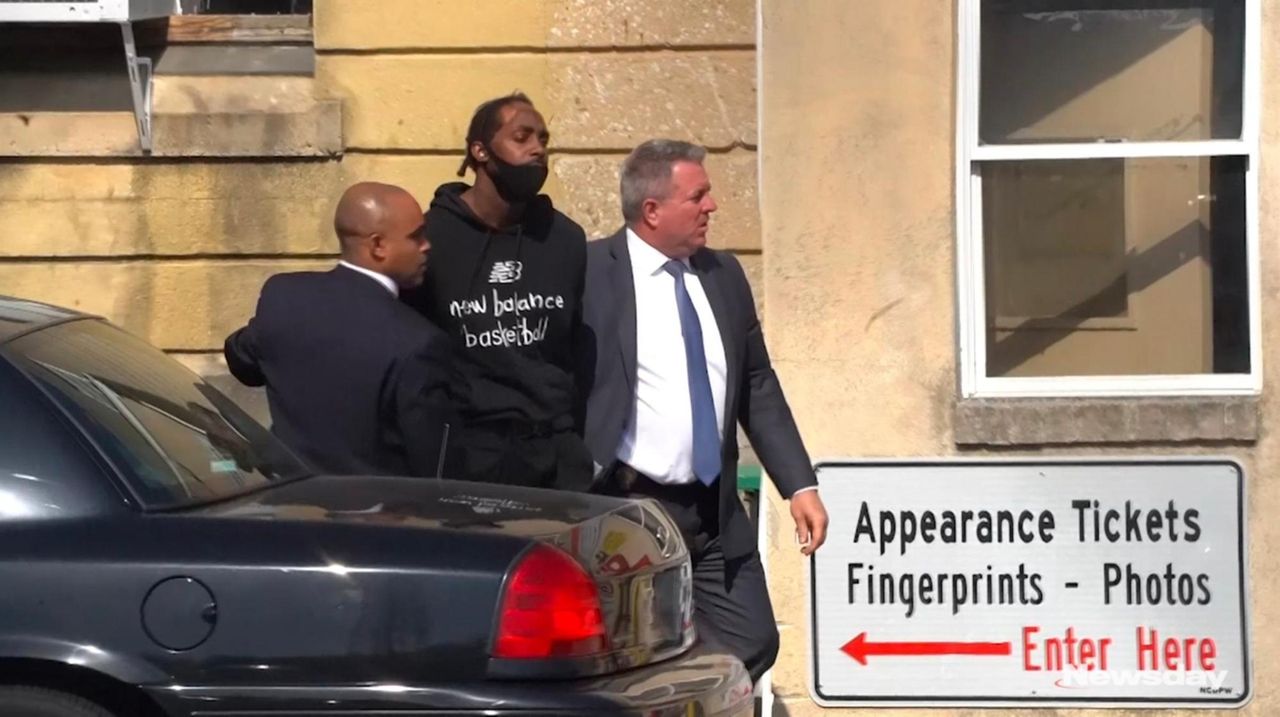 A West Hempstead supermarket employee who fatally shot a manager and wounded two co-workers shortly after he arrived at work Tuesday morning was captured hours later after a massive manhunt across Nassau County, authorities said.

Alleged gunman Gabriel DeWitt Wilson, 31, opened fire at the Stop & Shop on Cherry Valley Avenue at about 11:19 a.m., police said. Wilson, who collected carts in the parking lot, was seen leaving the store with a small handgun shortly after the shooting. He was captured just before 3 p.m. at a six-story apartment building on Terrace Avenue in Hempstead following a search by Nassau police.

"When he showed up at work today, he went straight to an office and shot a male and female victim and then went to a second office and killed a manager of the building," Nassau Police Commissioner Patrick Ryder said.

Dozens of customers were shopping at the store when shots rang out, police said. Barbara Butterman of West Hempstead said she was shopping for strawberries when she heard four or five shots.

The Person of Interest involved is Gabriel DeWitt Wilson, age 30. He is approx. 6'2" & wearing a black baseball hat and a black sweatshirt, & was last seen heading westbound on Hempstead Turnpike. Please call 911 immediately if you have any information. #NassauCountyPD (2/2) pic.twitter.com/qBcVNSjuF5

"I was trying to figure out places in the produce department to hide under the counter, so if the shooter came along we had a place to go," Butterman said.

The commissioner said investigators have not yet determined a motive for the shootings. More than 150 Nassau police officers were involved in the search for Wilson, authorities said, and the NYPD also provided assistance. Ryder said police received numerous tips during the manhunt about where Wilson might have been hiding. Roads near the Stop & Shop were closed and police helicopters circled overhead for hours, and several school districts near the store were locked down Tuesday afternoon.

"Over the past several months we in Nassau County have watched active shooters across the country. Today that reality came home," Nassau County Executive Laura Curran said at a news conference. "The suspect was apprehended quickly while keeping surrounding communities safe."

Curran said the shooting happened as people have been dealing with a difficult year.

"This is the type of thing we are used to seeing on our TV screen, not in our communities," she said in an interview afterward. "Over the past several months there has been devastating gun violence in so many communities and today the epidemic has come to Nassau."

Police declined to identify the victims at a news conference Tuesday afternoon near the scene of the shooting, but Ryder said the manager was approximately 49 years old. The two other victims were taken to a hospital, where they were "conscious and alert" and speaking to detectives, the commissioner said.

Police would not say whether they were able to recover a weapon. No charges were immediately filed against him, police said. Wilson is expected to be to be arraigned in First District Court in Hempstead on Wednesday, police said. His charges are pending.

Wilson had a prior criminal record, Ryder said, but he could not provide immediate details. Wilson had also been the subject of a mental health referral in Nassau County.

The husband of one store employee who escaped unharmed said he had met Wilson before.

"He was always so pleasant, he always had a smile," said Thomas Moran of Island Park, whose wife Cathy Moran has worked at the store for about six years.

Kimberley Castro, 22, said she lived in the same Long Beach apartment building as Wilson for about six years. Wilson moved out out two years ago, she said.

"I woke up to this news still half-asleep and it did make me sad," Castro said. "I hope he’s OK. There has to be a reason behind it."

Wilson fled the scene wearing a black baseball cap, black mask and black sweatshirt, police said. After receiving several tips, police tracked down Wilson at an apartment building on Terrace Avenue in Hempstead, about two miles from the Stop & Shop. Nassau police officers and SWAT members surrounded the building and captured and arrested Wilson as he tried to escape. 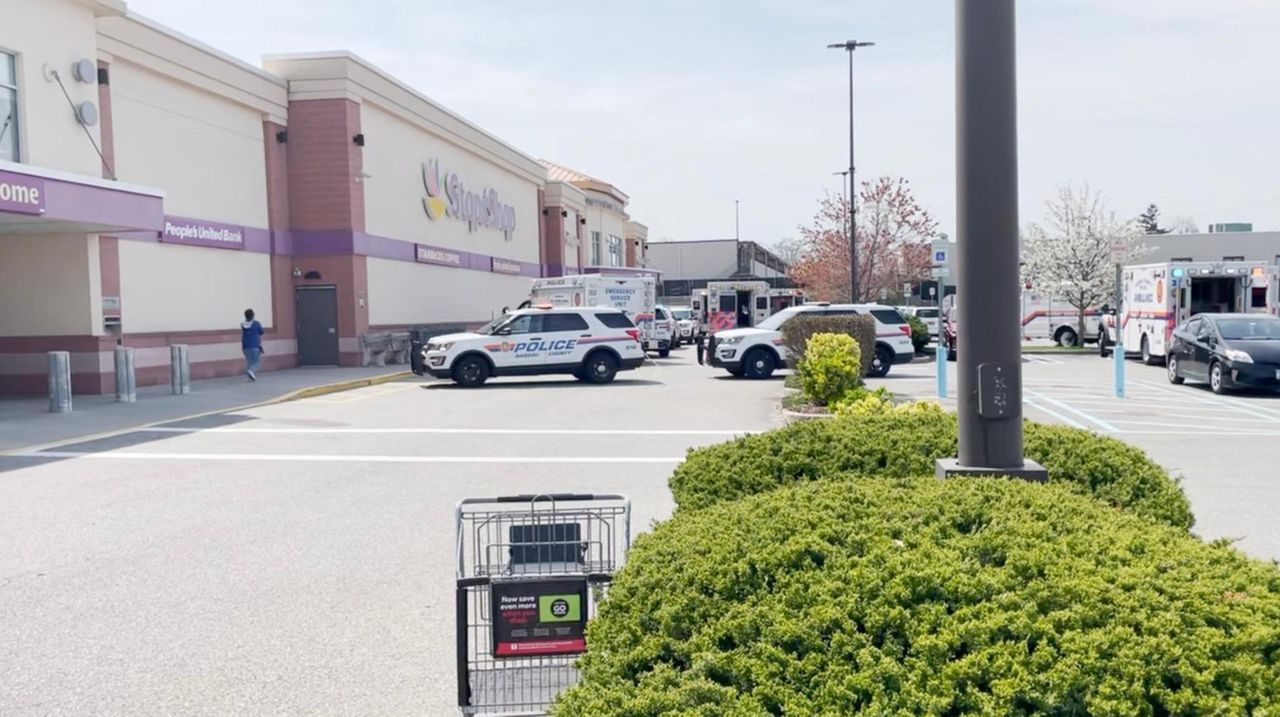 Scores of people were inside the grocery store at 50 Cherry Valley Ave. when police received a 911 call reporting "multiple shots fired," police said.

Butterman said the scene in the store was chaotic after the shots were fired.

"I just picked up a container of strawberries and I thought the shots were something that fell down in the back storage area," Butterman said. "Everyone was running around upstairs where offices were. Police got us out of the store and put us in the parking lot."

Cathy Moran’s son, 24-year-old Joseph Moran, said his mother was in the second-floor office when Wilson came in and began firing. His mother was standing behind one man when he was shot, Moran said. "If that guy wasn’t there, it could have been my mom," he said.

Moran said he regularly drives his wife, Cathy Moran, to and from the store. "He was the nicest man in the world," Moran said. "When customers are nasty, he acts right."

Moran said his wife had a playful game with the manager, in which they would bet on her doing some task.

"He and my wife were always betting — then he would buy her an ice coffee if she did something right," Moran said.

The victim has two daughters in the Valley Stream school system, confirmed Valley Stream South High School Principal Maureen Henry. One is in the high school, the other in middle school, she said.

"Myself and the entire South community is devastated for this family," Henry said.

She said that when she found out about the children, the school was in a "lockout," meaning that no one was to enter or leave the building. It ended when the suspect was taken into custody.

The daughters were not in school Tuesday, she said.

Henry said she has sent out an email to the school community about the tragedy. Parents have already started reaching out to offer to cook meals for the family, she said.

"We will be doing everything we can for them," Henry said.

John Durso, president of union local that represents most of the Stop & Shop’s employees, said the union had brought in grief counselors to provide support to traumatized workers.

"These are the people we represent and we are going to do everything we can and be there for them," said Durso, who leads Local 338 of the Retail, Wholesale, Department Store Union/United Food and Commercial Workers.

"Obviously, this was a day nobody expected and that will have a lasting effect for years to come," Durso added.

The West Hempstead school district was among the districts that locked down its buildings early Tuesday afternoon. "We were informed by the police that there is activity in the area," the school district said on Twitter. "We are presently in a lockout and we’ll inform you when it is over. Please do not come to the buildings. Everyone is safe."

Two of her children attend the St. Thomas the Apostle School, a few blocks away from the shooting site in West Hempstead, and two go to Kellenberg Memorial High School in Uniondale. Both schools went on lockdown early Tuesday afternoon. Lang said she had read an online post earlier in the day that noted Tuesday was the 22nd anniversary of the Columbine shooting in Colorado.

"It’s very scary," said Lang, who collected her children after the suspect was caught. "Columbine is in a different state, so far away. Within two or three hours of seeing that post, you hear about this, a town over, where my kids go to school. It’s just unsettling."

Gov. Andrew M. Cuomo, who had directed New York State Police to help with the search, said he was "closely monitoring" the situation. "I'm praying for the victims, and my heart breaks for their families and loved ones," Cuomo said.

Stop & Shop president Gordon Reid said in a statement the store would be closed until further notice.

"Our hearts go out to the families of the victims, our associates, customers and the first responders who have responded heroically to this tragic situation," Reid said. "At this time, we are cooperating fully with local law enforcement on the investigation. The store will remain closed until further notice, and we appreciate the Long Island community's support during this difficult time."

The shooting came on the same day that Suffolk County Executive Steve Bellone announced the expansion of a video-sharing program to supermarkets and big box stores in the case of an active shooter or other emergencies.

"It’s one of the things that keeps me up at night as a county executive — that we can have one of these shootings here in our community, on Long Island," Bellone said. "We are the only country in this world where this epidemic of violence and mass shootings takes place. It is disgraceful, it is disturbing, and it has to end."

Ryder, speaking to reporters Monday about its security plans in light of the pending verdict in the Derek Chauvin murder trial, said the department was already in heightened alert even before the West Hempstead shooting and the guilty verdict.

Ramadan, the month Muslims dedicate to prayer and sacrifice, began on April 12, Ryder said, and the department boosted security at Nassau mosques to ward off anti-Islamic violence.

The commissioner also said the month of April is especially concerning for law-enforcement officials because Columbine and many other infamous mass shootings and terrorist attacks — Virginia Tech, the Oklahoma City bombing, the Boston Marathon bombing — have occurred during the month. Some of those attacks were meant to commemorate the April 20 birthday of Adolf Hitler.

"I'm praying for the families of those impacted and for our first responders. This Senate must and will move forward on legislation to help stop the epidemic of gun violence."

See photos from the scene of the Stop & Shop shootingOne person was killed and two others were injured in a shooting Tuesday morning at a Stop & Shop in West Hempstead, authorities said. Closed-circuit cameras expanded to Suffolk stores on day of shootingSuffolk County Executive Steve Bellone heard news of the shooting during the announcement on the camera initiative expansion and said: "This is in our backyard." Editorial: A new LI chapter in America's sad story of gun violenceFrom the pain and grief must come an end to the carnage.