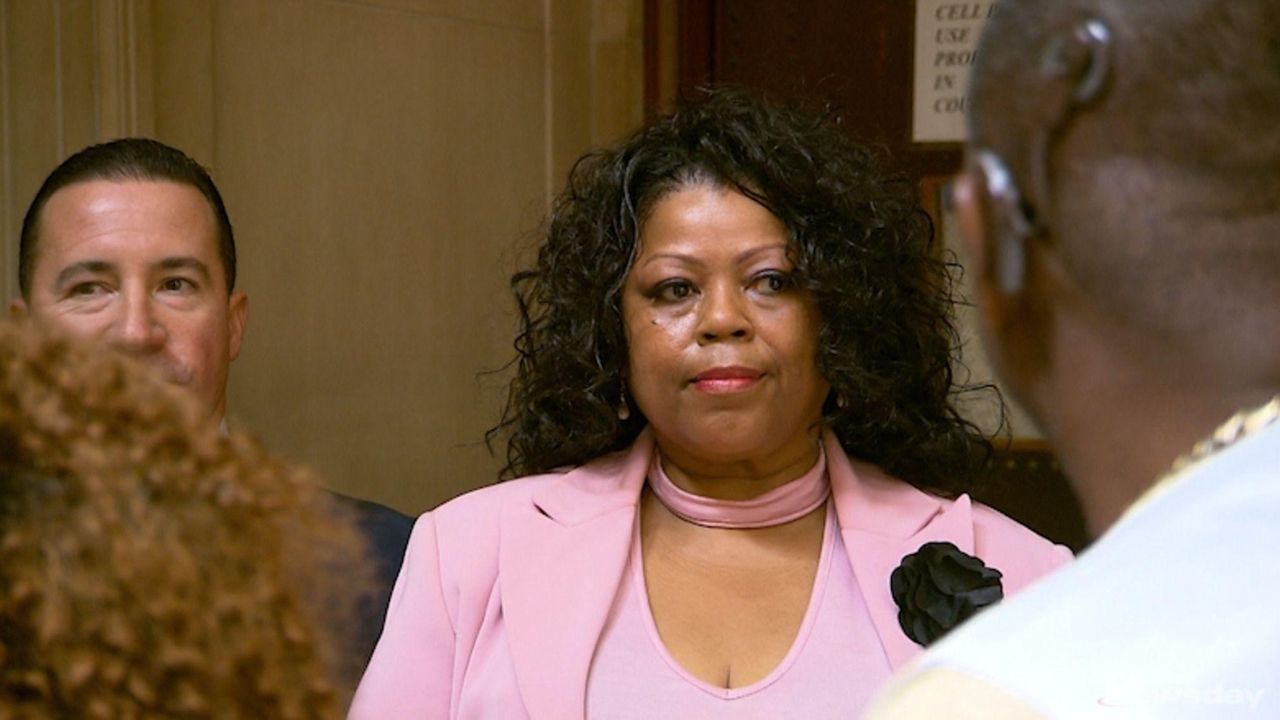 State Supreme Court Justice Robert McDonald on Friday, Aug. 11, 2017, sentenced Madi Grant, 36, of Oyster Bay, to 14 to 30 years behind bars for charges including second-degree manslaughter, leaving a fatal crash, driving while intoxicated and arson in a Southern State Parkway hit-and-run that killed Sherman Richardson, 59, of Hempstead. Richardson's widow, Jawana, who was in court, told the defendant, "I will never forgive you and I'm OK with that." Credit: News 12 Long Island

The widow of a Hempstead man who died in a Southern State Parkway hit-and-run told the man who killed him while driving drunk and high she “will never forgive” him — just before a judge imprisoned him for potentially decades.

“Not one time did you ever show a sliver of remorse to me or my family,” Jawana Richardson, the widow of Sherman Richardson, 59, told Madi Grant at his Nassau County Court sentencing Friday. “ . . . I will never forgive you and I’m OK with that.”

A jury convicted Grant in March on charges including second-degree manslaughter, leaving a fatal crash, driving while intoxicated and arson. They found Grant arranged to have the Chevrolet Captiva he’d been driving in the Dec. 5, 2014, crash torched after he fled the scene.

McDonald said while sentencing Grant that he knew the motorist hadn’t intended to kill the victim, an ironworker who was heading to his job that morning and preparing for retirement.

“But he did intend to drive drunk and that was his choice and that choice caused the death of Sherman Richardson. . . . He left his family and his friends with only memories,” he said.

Richardson’s widow displayed a portrait of her husband of two decades as she spoke of losing her “soul mate,” a man she said loved gardening, had been a die-hard Mets and Knicks fan, and was “the glue that kept it all together” in their family.

Prosecutors said Grant had left a Queens strip club and was drunk and high on marijuana when he crashed into Richardson’s car at about 6:30 a.m. at 84 mph, propelling it into a tree and killing him instantly.

Assistant District Attorney Stefanie Palma asked for maximum penalties for Grant’s convictions — saying he left the victim “like roadkill,” evaded a witness who pursued him off the parkway and through Amityville, and conspired to have the rental vehicle he’d been driving set on fire.

Defense attorney Donald Rollock had argued during the trial that the prosecution’s star witness — a convicted drug dealer — had been the driver and not Grant’s passenger during the crash. The Mineola lawyer Friday asked McDonald to give his client, a chef and father of four, a just sentence. He said he would appeal the verdict.

Grant addressed the court in a soft voice, acknowledging pain for families on both sides of the case and offering regrets about not testifying.

Richardson’s widow said she would continue to lobby alongside prosecutors for increases in the legal penalty for fleeing crash scenes.

“Justice was served for Sherman Richardson today,” she said. “Although it won’t bring him back, our family has justice and we thank everyone who was involved in helping us get to today.”

Nassau District Attorney Madeline Singas said later in a statement she was proud to stand with Richardson’s widow and call for increased hit-and-run penalties.