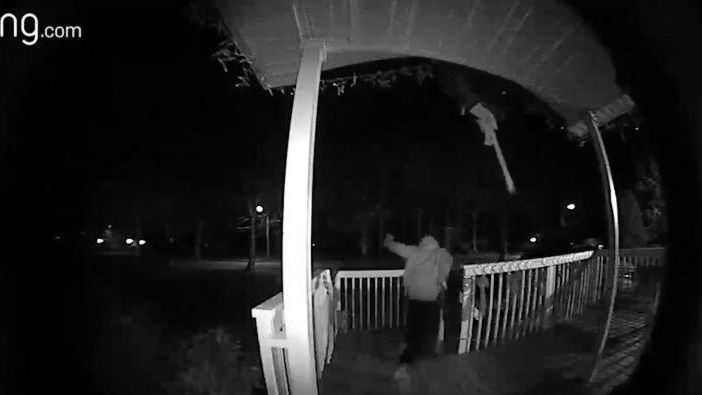 To the youths who smashed 37 home and vehicle windows this past weekend in Commack, East Northport and Elwood: The police intend to catch you.

Maybe you vandals didn’t realize as you were throwing rocks and brandishing that bat, but several residents along these suburban streets have surveillance cameras.

“More and more, people install them in doorbells and flood lights,” Cameron said.

The chief said he has seen four surveillance videos, so he knows there were two or three of you, and that you were snaking through the streets in a white or light-colored sport utility vehicle. In fact, the police are pretty sure it was a Ford Expedition.

Police received numerous calls from residents who woke up Sunday morning to find their vehicles’ windshields smashed. Some of these incidents go beyond mere mischief; they’re felonies, as the damage exceeded $250, the chief said.

“These are generally safe streets,” Cameron said. He added that incidents such as these degrade “that sense of safety.”

The quality of the nighttime recordings isn’t great, he said, so police are asking residents for more footage.

The chief added, “I know there are ones outside this group who know who did it. And if the ones who did it are reading this, I urge you to turn yourselves in.”

One video begins with a sharp sound, followed by a youth running right past the camera, hood over his head, fleeing in dark pants and a light hooded sweatshirt across a porch and out a gate. Another video shows a vandal throwing an object — possibly a rock — at a house and then fleeing as a dog starts barking.

The vandalism occurred between 11:30 p.m. Saturday and 1:30 a.m. Sunday. Vehicles took the brunt of the damage; only a few streets received multiple hits.

Suffolk County Crime Stoppers is offering a “fast cash” reward for information. The $2,500 reward will be paid within 72 hours of the arrest, according to police.

Anyone with information can call Crime Stoppers anonymously at 800-220-8477. All calls will be kept confidential, police said.

Hooper and Thadford streets in Elwood also were targeted.