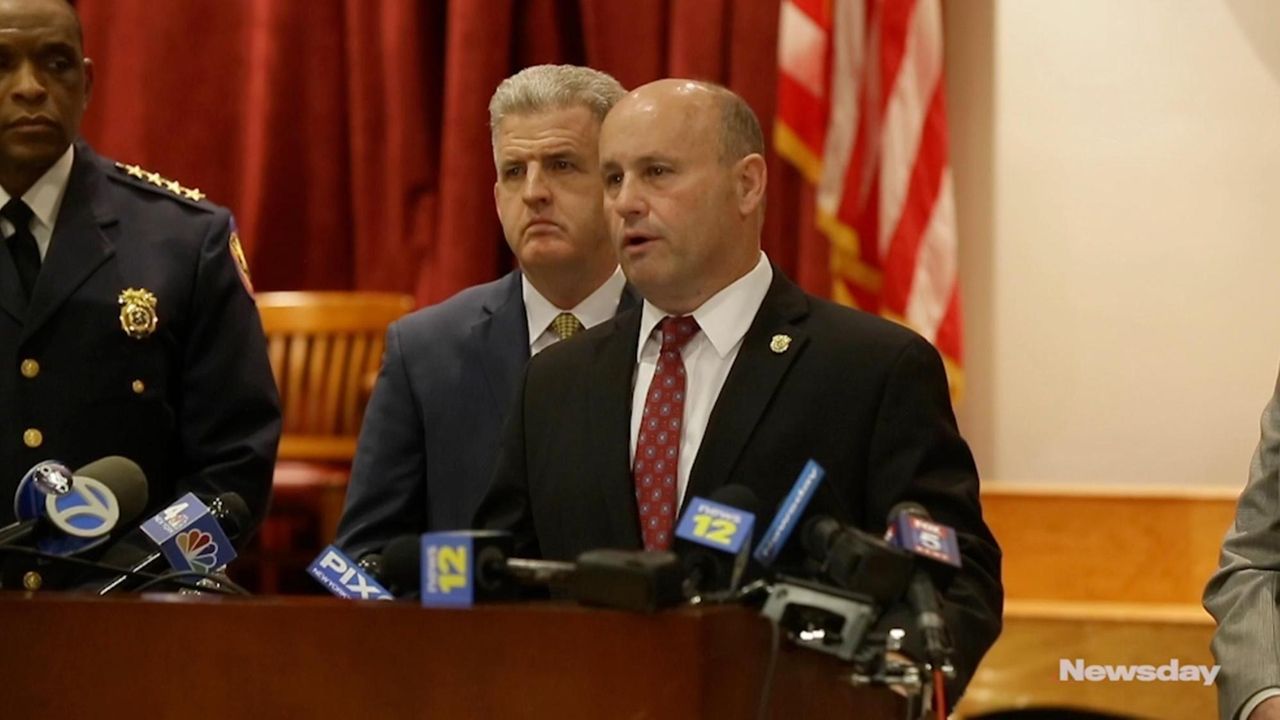 On Wednesday, Nassau County Police Commissioner Patrick Ryder spoke at a press conference in Mineola about the new law mandating that prosecutors turn over all evidence against a defendant within 15 days of arraignment, part of the controversial package that includes the prohibition of cash bail in non-violent cases.  Credit: Howard Schnapp

A man found bludgeoned to death in New Cassel Sunday was killed after his identity as a victim willing to testify against his alleged MS-13 attackers was revealed to the defense as part of the pre-trial process, police said Wednesday.

Police identified the victim as Wilmer Maldonado Rodriguez, 36, a former New Cassel resident who was homeless at the time of his death. Authorities said Rodriguez, who was severely beaten and stabbed by alleged MS-13 gang members in October 2018, was slated to testify against his alleged attackers.

"This courageous man was prepared to testify against his alleged assailants at an upcoming trial, but he was brutally beaten to death before he could," Nassau County District Attorney Madeline Singas said in a statement, adding: "This case underscores the importance of safeguarding the identities of witnesses and victims of crime and our hearts are with Mr. Maldonado’s family and friends as we grieve his loss. "

The identity of Rodriguez was originally under a protective order but was later turned over according to a judge's instruction as part of pre-trial discovery in which the prosecution reveals its evidence so the defense can prepare. The judge ordered lawyers for two defendants not to reveal Rodriguez' s name to their clients until the trial's scheduled start Jan. 6, according to the attorneys and court officials.

In interviews, attorneys for both defendants denied disclosing any witness or victim names.

The death of Rodriguez, whose body was found outside an abandoned home, prompted a news conference Wednesday in which officials initially linked it to recent changes in criminal justice reforms that speed up discovery, only to later say there was no direct correlation.

Rodriguez was attacked when he intervened in October 2018 when two boys were allegedly threatened by MS-13 and was struck with a bat in the head and stabbed multiple times, authorities said.

Nassau Police Commissioner Patrick Ryder said even before Rodriguez was killed, he was assaulted and another victim was shot at -- acts of intimidation that Ryder said began after the previously sealed evidence in the case was disclosed to defense attorneys.

“I never gave him the name of those people. And he never asked me for it,” Greg Madey said Wednesday, the defense attorney for one of the defendants, Denis Pineda, 20. “I’m offended by the allegation that Denis Pineda had something to do with orchestrating this murder,” he added of Rodriguez’s slaying.

Justin Feinman, the defense attorney for Elian Ramos Velasquez, 19, said that the suggestion “at this point to say that it was a defense attorney that leaked without more information is completely inappropriate.”

“I feel horrible that this happened,” Feinman said. “This should have never happened. I just don’t see how you can blame a particular judge or attorney.”

Court files show a judge signed the protective order more than a year ago, saying prosecutors could withhold identifying information about civilian witnesses from the defense until that ruling was modified.

Feinman said Wednesday that acting state Supreme Court Justice Helene Gugerty, the trial judge, put a new order on the record in court in late December. He said it was agreed the prosecution would hand over evidence that included witness information, but he wouldn’t share it with his client until the time of trial – except for information relating to his client’s phone records.

Madey said he recalled Gugerty wanted to try the case in the beginning of the year.

But under the criminal justice reform that took effect Jan. 1, the defense was entitled to have all discovery information for a certain amount of days before a trial. That meant the trial couldn’t have started on Jan. 6.

Nassau Supervising Judge Teresa Corrigan and Gugerty discussed the matter in December, according to court officials, who said six alleged MS-13 defendants in the case were set for trial in early 2020.

Records show some of the defendants in the case pleaded guilty last year in Nassau County Court and at least one related matter was handled in Family Court – where some juvenile justice proceedings take place. Ryder said there were nine defendants in all.

Neither the prosecution nor the defense sought a revision to Gugerty’s order when the trial failed to go forward Jan. 6, according to court officials.

When asked if the prosecution objected to the judge's 2019 order, a Singas spokesman said, "We continued to request that the identities of the witnesses be protected until we could be ready for trial."

Earlier Wednesday, Nassau County Executive Laura Curran and Ryder had initially linked Rodriguez's death to a new law that speeds up the discovery process, part of the controversial new criminal justice reforms that include the prohibition of cash bail in non-violent cases — an assertion that was rejected by others familiar with the new law.

"We're asking Albany to go back and rethink it. Come back with changes to that law, but it needs to happen quickly before we have another victim as in this case," said Ryder originally, later saying there's no direct correlation between the law and Rodriguez's death.

Lucien Chalfen, a spokesman for the state court system, declined to comment beyond saying: “We’re in the process of reviewing the minutes of the proceeding in December and the one on January 6."