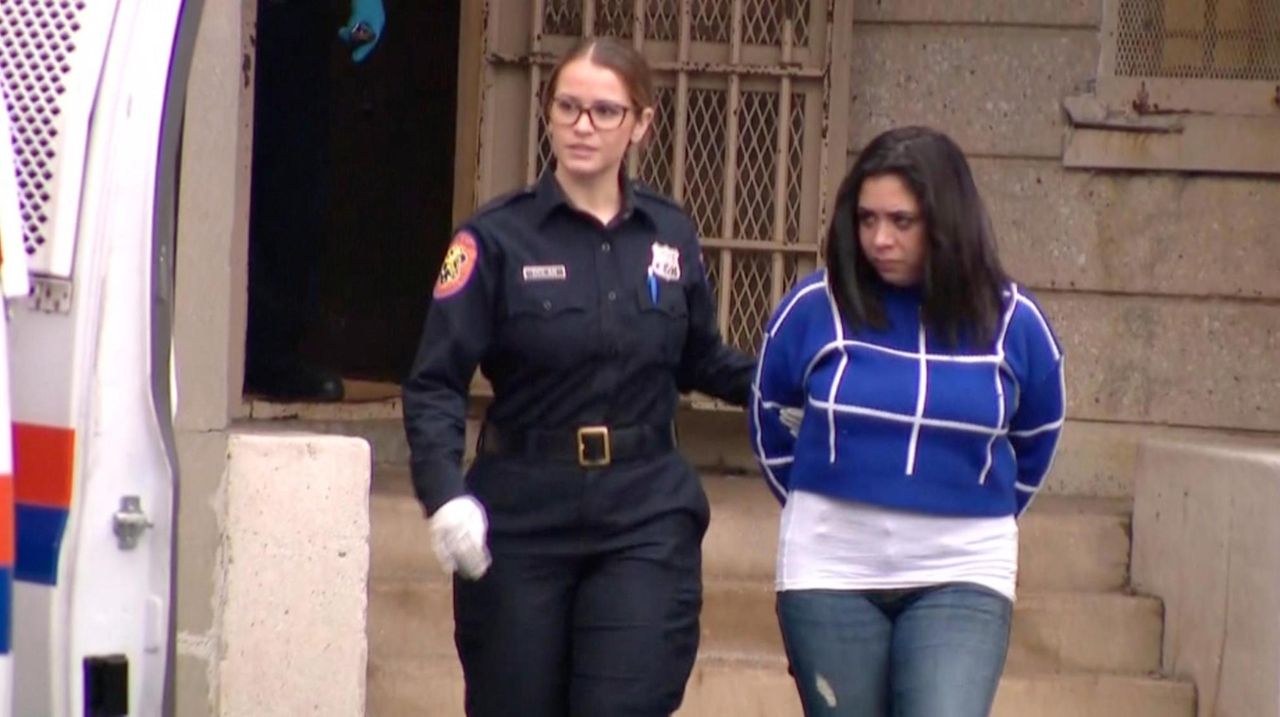 Molly Dutrow, 24, of Syosset, was charged with assault after she bit a police officer in Oyster Bay on Sunday, police said. Credit: News 12 Long Island

A Syosset woman who refused to pay for parking at the Oyster Bay Oyster Festival injured the parking attendant, bit an officer, and ended up charged in several other unrelated cases after her arrest, Nassau police said Monday.

Molly Dutrow, 24, refused to pay $10 about 5:15 p.m. Sunday to park on the corner of West Main Street and Larrabee Avenue, police said. As she pulled away from the lot,  Dutrow's vehicle brushed against the parking attendant, knocking her down, police said. The attendant suffered minor injuries to a leg, police said.

A witness called police, authorities said, and an officer spotted Dutrow's Dodge Dart a short distance away and attempted to arrest her.

"When the officer came, she ran and they chased her and captured her," said Det. Vincent Garcia, a Nassau police department spokesman. "She bit the officer in the left hand."

Police then discovered Dutrow was driving on a suspended license and had two marijuana joints in her pocket, authorities said.

After officers put Dutrow in the back seat of a police car, they "saw her wriggling about and then they noticed another little bag of marijuana on the floor that hadn't been there prior to when they put her in," Garcia said.

She was known to police because of arrests dating back to 2012, Garcia said.

During the investigation, officers determined Dutrow had posed as a ShopRite employee in March to get a woman's paycheck for more than $500 from the Plainview store on Old Country Road, Garcia said, before cashing it.

Dutrow also stole about $1,000 in groceries from Christina's Epicure market in East Norwich over three days last year, police said, twice in November and once in December.

In all, she was booked on more than a dozen charges.

Bail was set at $50,000 bond or $25,000 cash. She was represented by The Legal Aid Society of Nassau County, which has a policy of not commenting at the arraignment stage.

Oyster Festival: Food, music, more photosSee fun photos from the 35th annual Oyster Festival at Theodore Roosevelt Memorial Park in Oyster Bay. 5 ways to send story tips to Newsday Do you have information that might lead Newsday to an important story, or an investigation? A document that starts us on the trail? Here are five ways for you to send our journalists tips, documents and data with a range of security options.