The Islanders returned home to the Nassau Coliseum, beating the Flyers in overtime during their preseason game on Sept. 17, 2017. Credit: Michelle Farsi

Gov. Andrew Cuomo opened the door Wednesday for the Islanders to make at least a temporary return to the renovated Nassau Coliseum while the new arena at Belmont Park is being built.

Islanders co-owner Jon Ledecky said the new arena would be built “as soon as possible,” but sidestepped questions about a return to Uniondale, where the team played for 43 years before leaving for Brooklyn in 2015.

At Wednesday’s news conference to announce the Islanders’ winning bid, Gov. Cuomo petitioned NHL commissioner Gary Bettman to allow the Islanders to play “some of the home games” at the Coliseum while the Belmont Park arena is built. The state “will negotiate with the New York Islanders to ensure they will play as many games as possible [at Nassau Coliseum]” while Belmont is being built, the governor’s office said in a statement Wednesday afternoon. 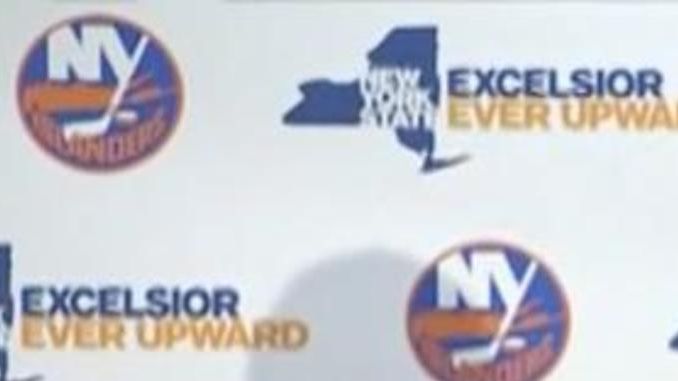 Bettman has said repeatedly that the Coliseum was not a suitable option for the Islanders, but he did not reject Cuomo’s proposal on Wednesday.

“While there is a great deal of history at the Nassau Coliseum, it simply outlived its usefulness and in its current condition, it’s not a viable home for the Islanders, so to keep the Islanders healthy, strong, on Long Island, this project was essential,” he said of the new arena.

But, with Billy Joel in attendance, Bettman said he would think about having the Islanders return to the Coliseum for a few games if “Billy Joel thinks about being the opening act at the new arena.”

The Islanders or Barclays can opt out of the 25-year licensing agreement in January. The team is currently negotiating with Brooklyn Sports & Entertainment, which operates Barclays Center and the renovated Nassau Coliseum, on amending the lease. The window for those negotiations closes on Jan. 1.

The Islanders are contractually obligated to play next season at the Barclays Center in Brooklyn, and the two sides could negotiate an extension until the new arena is ready.

Brooklyn Sports & Entertainment released a statement after Wednesday’s announcement, which said, “We are currently awaiting a response from the Islanders to our proposal to bring NHL games back home to the Coliseum on an interim basis. We understand the required approvals from all parties involved to make that happen, and are prepared to facilitate any necessary enhancements.”

Ledecky said his focus has been getting the Belmont Park arena approved. The rest, he said, will be worked out in the coming weeks.

“We’re moving as fast as we possibly can,” Ledecky said. “That’s what we want. We’re willing to work night and day on this project . . . The timetable and all those details will be coming out in the weeks ahead.”