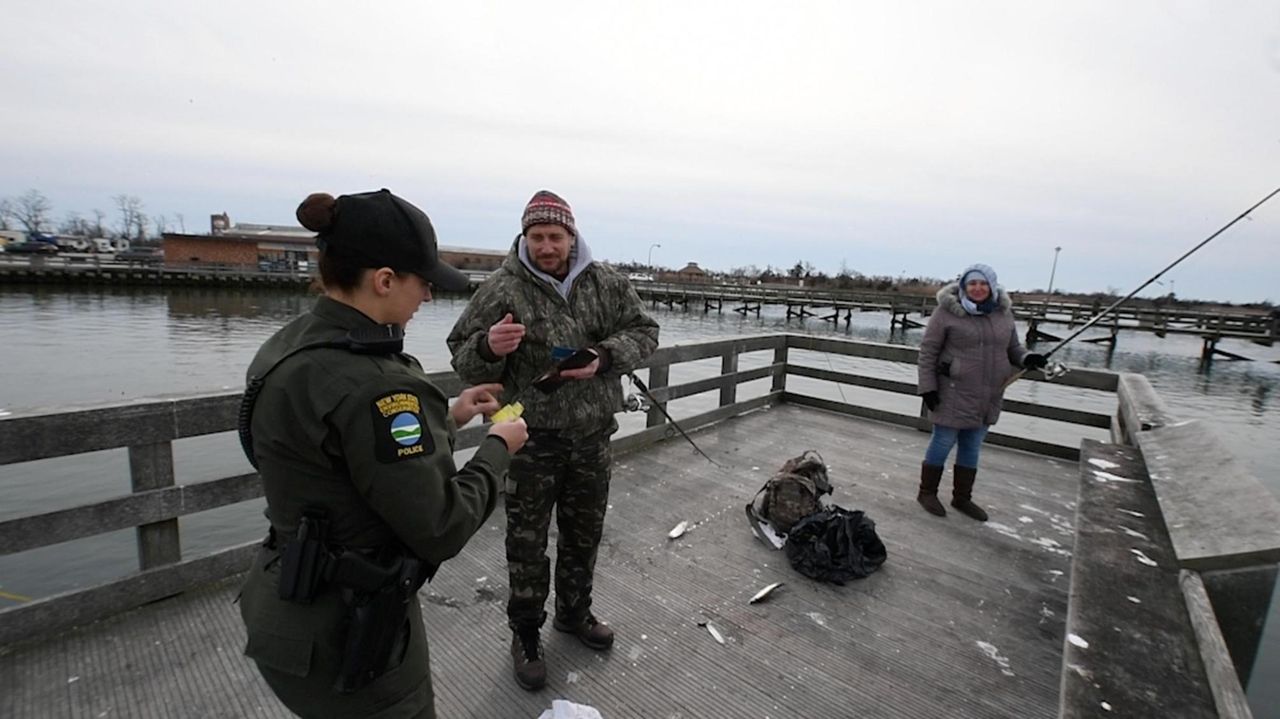 It's like an elaborate game of cat and mouse — but with fish.

New York's often controversial and convoluted commercial and recreational fishing limits are set by an interstate fisheries commission, but enforcing those limits is the job of 23 Department of Environmental Conservation officers who patrol Long Island’s shores.

“We’ve had people hide them in T-shirts, tucked in their pants, buried in the sand at the beaches, under rocks, under logs,” said enforcement Officer Christopher Macropoulos.

The conservation officers go out onto piers, checking to see that fishermen are properly licensed and making sure they’re not taking prohibited species or undersized or over-limit fish.

Though many of Long Island’s recreational fishermen comply with the state’s strict regulations, sometimes keeping them honest can be a challenge.

In an incident known among the officers as simply the "kangaroo-pouch incident," a fisherman in 2014 stuffed four blackfish into pockets he had sewn into his shirt. Officers say they discovered him on particularly windy October morning. So windy that as he emerged from the tall grass near the Wantagh Bay Bridge his jacket was pressed taut against him, revealing peculiar bulges on his stomach.

He claimed to the officer on patrol that he didn’t land anything that day. He even showed him an empty backpack as proof.

But when the officer asked him to unzip his Windbreaker, he found the hidden fish pockets.

The officer issued him a ticket for undersized fish and for fishing without a marine registry, but it wasn’t the first time he’d been caught, according to Lt. Sean Reilly.

In the spring and fall, officers commonly catch people breaking recreational regulations for striped bass and blackfish. Violations involving up to five fish result in a fine of $25 per fish. Fees increase if more fish are taken, according to the DEC.

The DEC says it gave out at least 208 tickets for fishing violations in New York waters in 2017.

Regulations vary widely across species and are specific to certain waterways. They are adjusted season to season based on an assessment of the stock.

For striped bass — during the season running from April 15 through Dec. 15 — fishermen are allowed to keep one per day, measuring at least 28 inches.

These restrictions can be a point of contention. In May, a plan to reduce this season’s quota for black sea bass was reversed after it came under fire by local lawmakers and fishermen.

But sometimes, recreational anglers just don't quite have a grasp of the rules, and the officers on patrol focus on educating them. If everything's above board, they might just indulge the fishermen by listening to their big fish tales — like on a recent December morning when two men boasted to Macropoulos and Officer Justanna Bohling about the sand tiger sharks they hooked this summer.

"If I'd let them, they'd talk to me all day," Macropoulos said.

Still, there are the times when they find the usual suspects, who “once they get caught, they usually get better at hiding their fish,” Reilly said.

He recalls one man who was ticketed for keeping striped bass near the west end of Jones Beach. The same man was caught a few months later for taking undersized blackfish along the Meadowbrook Parkway, and complained to the officer to cut him some slack.

"He goes, 'Come on, can't you guys give me a break? You write me tickets every year,'" Reilly said. "It's like, it's our fault that you keep violating the law? If you don't want to keep getting tickets, stop keeping the illegal fish."

The department’s keen on thwarting poachers who could undercut commercial fishermen. They often receive tips about poachers and can stake out those boats for hours at a time, Reilly said.

“Those are the people we really want to catch, because not only are they hurting the population with the amount of fish they’re taking, but if they’re selling the fish at the discounted price, they’re affecting what the legal fishermen can sell,” he said.

Bohling said a popular ploy is to hide fish in plastic bags weighed down with rocks. Poachers attach the bags to the boat with clear microfilament line and throw them overboard. If they catch sight of officers, they can cut the line to ditch the evidence.

This October, officers searched two fishermen suspected of poaching striped bass near Mecox Inlet in Southampton. The men denied catching anything but one of the officers noticed a sandy handprint on the side of a large set of subwoofers in their car and found several fish hidden in the fake speakers.

In recent years, the DEC has brought in some backup to stay ahead of local poachers. Cramer, a K-9 trained to detect striped bass and deer, helped Macropoulos find bags of undersize striped bass hidden in the bushes near the Bayville Bridge back in May.

“Fishermen are getting very, very crafty, but we’re staying right on top of them,” Macropoulos said.