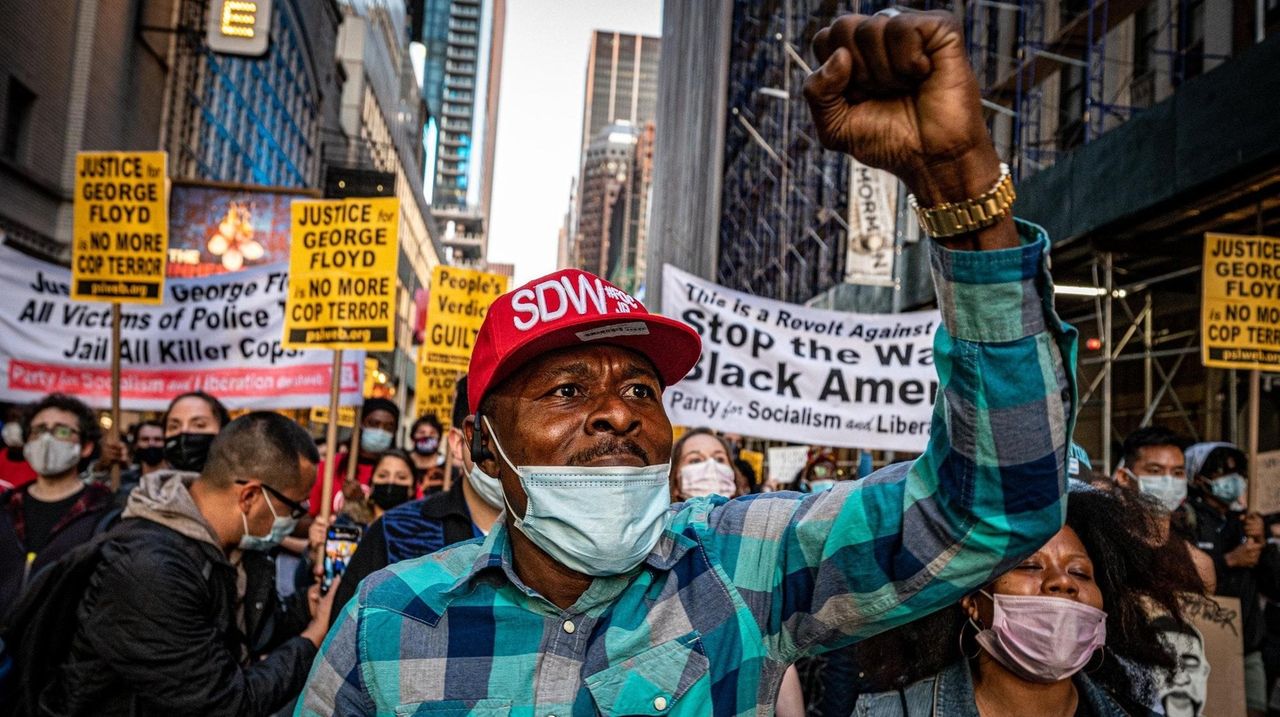 Long Island racial justice activists reacted with relief and resolve Tuesday after a jury found ex-Minneapolis cop Derek Chauvin guilty of murder for the killing of George Floyd — a Black man who died after the white officer kneeled on his neck for more than nine minutes.

As a judge prepared to read the guilty verdicts on all counts to Chauvin, Floyd's family and others in the courtroom, Ezekiel Torres, 21, a SUNY Binghamton senior from Shirley, had his doubts.

"Based on the record in my lifetime, I was expecting the worst. … I didn’t think justice would be coming," Torres said.

After a bystander's video captured Floyd, in handcuffs and face down on the pavement as Chauvin's left knee pressed into his neck, Torres said he held his own weekly demonstration for racial justice on a street corner in his hometown.

Derek Chauvin verdict The jury of six white people and six Black or multiracial ones came back with its verdict after about 10 hours of deliberations over two days. Credit: AP

Torres said he planned to celebrate the verdict quietly at home — approaching a year after Floyd's death spurred him and so many others to take a stand — and remember the others in similar circumstances who had not received accountability.

"It’s difficult as a young Black person in America," he said, "to find these small victories."

Across Long Island and in New York City, sometimes sober celebrations began almost immediately after the verdict was announced and continued well into Tuesday night.

A crowd of about 30 — mostly members of social justice activism group LI Peaceful Protest — gathered at the Long Island Rail Road station in Merrick for a candlelight vigil for Floyd.

As satisfying as it was to realize Chauvin is headed to prison, there is still so much more to do, said vigil organizer Terrel Tuosto, a West Hempstead resident and co-founder of Long Island Peaceful Protest.

"It feels good knowing that all these protests and all this coming together, it was for something," Tuosto said. "Now we’re coming together and saying, ‘All right, this is good. This is positive that this happened. But now we have to plan for ... what else is next? How do we keep this standard for all police brutality … and killings of Black people?"

In Manhattan Tuesday night, about 100 protesters demanding the abolition of police commandeered the traffic lanes of the Manhattan Bridge, with the forbearance of the NYPD nearby.

The NYPD’s preexisting preparations to contain unrest following the Chauvin verdict remained in place Tuesday night — side streets closed with police barricades, cops standing watch — though no unrest had materialized.

At Union Square, about 50 marchers circled the outer edge of the park, led by a man with a drum with a handmade sign: "BLACK LIVES MATTER."

Another sign said: "NO JUSTICE UNTIL THERE ARE NO MORE Cops Murdering or Brutalizing People."

About 200 people crowded outside the Barclays Center after hearing Chauvin was guilty on all counts — unintentional second-degree murder, third-degree murder and second-degree manslaughter. Speakers described the verdict as a milestone for racial justice and proof the protests that followed Floyd’s killing last year had an impact. They urged those gathered to continue to agitate for police reforms and accountability.

The NYPD on Twitter described demonstrators in Brooklyn as "peaceful" — and while security was stepped up outside of some of the municipal buildings that were targeted in last year's unrest, including City Hall in Manhattan, no demonstrators materialized at those landmarks.

Edward Chung of Valley Stream, 22, said the verdict felt like a validation of the nationwide protests that he participated in last summer. Chung joined protests on Long Island, and in Chicago, where he went to college.

"A lot of times, it’s just a feeling of hopelessness," Chung said. "I feel like if there wasn’t so much national attention towards the case, maybe it would have ended up differently. It wouldn’t be on the forefront of everyone’s mind. I think it showed that protests and community activism are effective in creating change."

Some local and state officials also applauded the guilty verdict.

"I feel a sense of relief, but not a celebration," said Tracey Edwards, the NAACP's Long Island regional director. "As the prosecution said, people needed to trust their own eyes. We all saw this murder on television. So I believe that the jury rendered the appropriate verdict."

New York State Attorney General Letitia James said in a statement there was "finally accountability for this atrocious crime" against Floyd.

"While true justice will never be served as long as Black men and women are subjected to such inequality, today, we are one step closer to a fairer system," James said.

Nassau County Executive Laura Curran, in a statement, called Chauvin's conviction "an important step for justice in our nation."

"The tragic murder of George Floyd rightfully spurred both outrage and action — including historic police reform here in Nassau County," she said. "Nassau County will continue to focus on building trust between police and the communities we serve, so that every resident knows they are both respected and protected."

Suffolk County Executive Steve Bellone said in a statement: "While justice for George Floyd will never fully be achieved, the jury today gave us hope that a more just world is possible. We must use this moment to redouble our efforts to fight for racial equality."

Gov. Andrew M. Cuomo, who mandated police reforms for departments statewide in the aftermath of Floyd's killing, called the verdict "a powerful statement of accountability." Both Nassau and Suffolk counties are poised to begin equipping their police forces with body cameras as part of reform efforts.

"While I'm grateful that the jury returned these verdicts, accountability is not the same as justice," Cuomo said. "It doesn't make an unacceptable situation acceptable, and it doesn't bring Gianna's dad back. But it must fuel our continued march towards equity."

"While I’m heartened by this verdict and believe it’s an important step towards accountability, we must remember that this verdict is not true justice," she said in a statement. "True justice would mean that George Floyd would have walked away from that encounter alive."

"That Derek Chauvin was found guilty on all counts is important and it is right," he said in a statement. "But I also know we must continue to challenge the system that enabled his murder in the first place."

Bystander video of a handcuffed Floyd, face to the pavement, with Chauvin kneeling on his neck for what prosecutors said was nine minutes and 29 seconds, set off massive protests last summer in Minneapolis and in cities nationwide, including large-scale demonstrations on Long Island and in New York City.

In addition to the largely peaceful protests in the aftermath of Floyd's killing, looters descended on Minneapolis, torching a police precinct and businesses. There were also days of looting of retail stores in Manhattan and in other cities across the country.

Floyd, 46, died on May 25 after his encounter with Chauvin and three other officers, following police being called to a convenience store for a report that Floyd had used a fake $20 bill. Chauvin's defense attorney argued Floyd died from a Fentanyl overdose and a preexisting heart condition.

Millions of Americans watched the trial as it was broadcast live across several television networks and many, especially Black Americans, were anxiously anticipating the verdict.

"I can understand both sides, working on the job," he said. But, he added: "When somebody stops resisting, or puts their hands up, you should be able to see that."

Elaine Gross, president of civil rights organization ERASE Racism, said she was relieved by the verdict.

"But we must never forget that this murder, and all the other murders are symptoms of the curse of racism and the myth of white supremacy," Gross said. "Unless and until we overturn this, we will have no justice and no peace."

Ariana Levin, 17, of Huntington Station was at a play rehearsal when her parents texted her separately to tell her the verdict. All afternoon, she had been anxiously waiting for it.

"It’s definitely a step in the right direction for the Black Lives Matter movement," said Levin, who organized a Juneteenth protest on the Island last year. "It’s one small step for ending police brutality against people of color."

Tamar Paoli-Bailey, a substitute teacher from Elmont, said she has followed the trial but chose not to be "glued to it" because she said repeatedly seeing the images and hearing the details had been a traumatic experience for her.

"Back a long time ago, lynchings were a public spectacle. … People would bring children. People would go on dates and watch Black people being hung," she said minutes before the verdict came. "So watching Black people die on public display and no justice being served is part of that American fabric," she said, calling it the "American trauma."

After seeing the verdict, Paoli-Bailey said she felt it "bittersweet" as she reflected on other cases of Black people killed by law enforcement.

"I don’t feel hopeful until more Derek Chauvins of the world continue to be found guilty," Paoli-Bailey said. "Let him be not the exception but an example."

AG Garland announces police probe day after Floyd case verdictThe Justice Department is opening a sweeping investigation into policing practices in Minneapolis after a former officer was convicted in the killing of George Floyd there, Attorney General Merrick Garland announced. Columbus police officer fatally shoots girl swinging knife minutes before Floyd verdictColumbus police shot and killed a teenage girl who swung at two other people with a knife, according to bodycam footage from the officer who fired the shots just minutes before the verdict in George Floyd's killing was read. Ex-cop Derek Chauvin guilty of murder in George Floyd caseThe verdict — guilty as charged on all counts, in a relatively swift, across-the-board victory for Floyd's supporters — set off jubilation mixed with sorrow across the city and around the nation. Photos: Reaction to the Chauvin verdict from around the U.S.Former Minneapolis Officer Derek Chauvin was convicted of murder and manslaughter for pinning George Floyd to the pavement with his knee in a case that touched off worldwide protests, violence and a furious reexamination of racism and policing in the U.S.