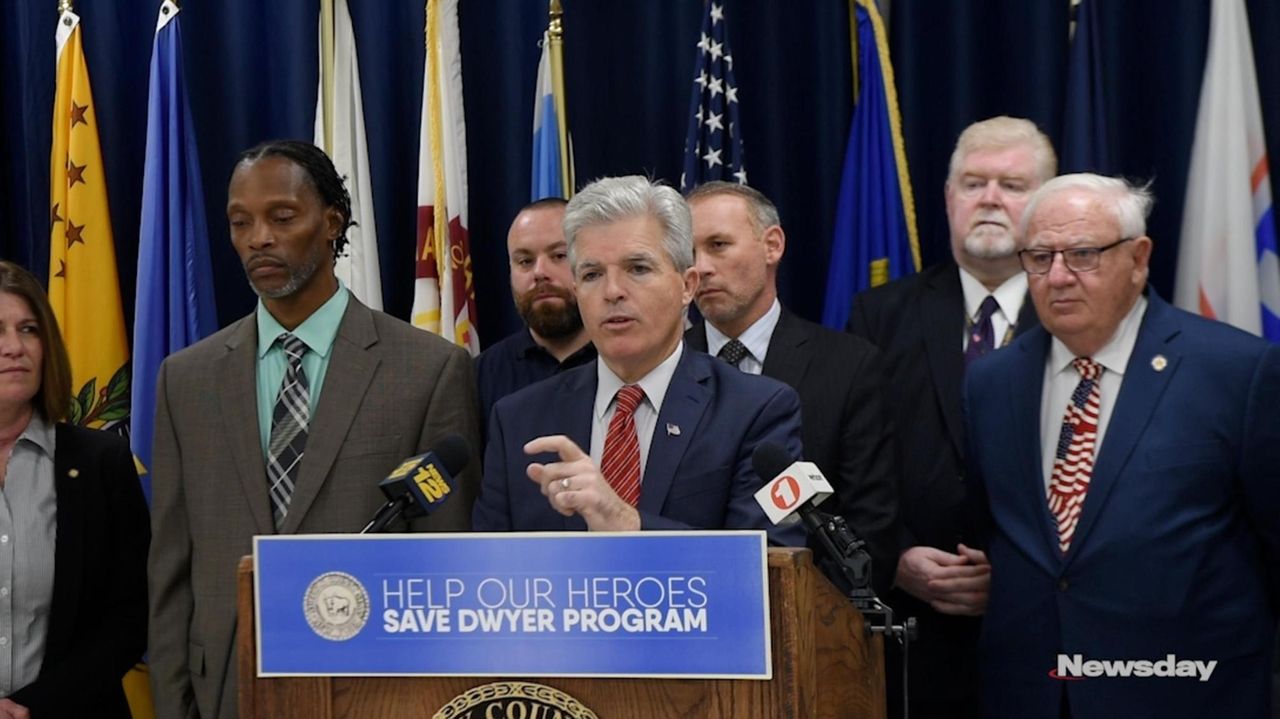 Nassau and Suffolk officials gathered in Hauppauge on Friday to urge the State Legislature to restore funding for the Joseph P. Dwyer Peer Support Project. The project provides support and counseling to active-duty and veteran military personnel suffering from post-traumatic stress disorder and other adjustment conditions. Credit: Andrew Theodorakis

Joined at a news conference  Friday by Suffolk lawmakers and veterans advocates from across Long Island, Bellone said the program has spared the lives of veterans who have struggled with depression, suicidal thoughts, uncontrolled rage or other psychological challenges that can be associated with military service.

“It is important to remind ourselves and remind our citizens that the wounds that these service members suffer in war many times manifest themselves once they return home,” Bellone said at the H. Lee Dennison Building in Hauppauge. “It can happen years down the line.”

The Dwyer project is a partnership between the county and the Suffolk County United Veterans nonprofit organization that provides peer-to-peer support and counseling to National Guard, Reserve, active duty and veteran military personnel who have struggled with readjustments to civilian life.

John Damato, 56, of Levittown, whom Bellone invited to speak at the news conference, said the program helped him cope with military-related anxieties that sometimes were so severe he could not leave his house.

Damato, an Iraq War veteran who served in Baghdad from 2004 to 2005, said he did not realize he was having difficulty coping with war-related psychological trauma until four years ago, when a fellow veteran told him his sudden mood changes suggested he was struggling with post-traumatic stress. The veteran recommended that he seek help from the Dwyer program offered in Nassau County.

Damato said he came to understand that fireworks and other noises reminded him of the constant sense of danger that troubled him while he served in Iraq.

“With the help of the Dwyer program and the doctors at [the Veterans Affairs Medical Center at Northport], fireworks still bother me, but not to the point that I’m diving under my bed like I used to.”

The program was named for Private 1st Class Joseph Dwyer of Mount Sinai, an Army medic whose cradling of a distressed Iraqi child was captured in a photograph that became an early iconic image of the Iraq War. Dwyer battled post-traumatic stress disorder after leaving the military and died of a chemical overdose in 2008.

Since its inception in 2012, more than 10,000 veterans have made use of Suffolk’s Dwyer program, according to Bellone’s office. The mentoring program has since been duplicated in 22 other counties in the state.

Bellone’s comments came on the heels of a Tuesday lobbying effort in Albany during which leaders of the New York American Legion, the largest veterans organization in the state, urged lawmakers to restore $3.7 million for the Dwyer program that was left out of Cuomo's budget proposal. Suffolk received a $185,000 share of the money in the current state budget.

Bellone plans to travel to upstate counties over the next several weeks to drum up support for restoring funding to the Dwyer program, according to Marykate Guilfoyle, a spokeswoman for the county executive.

Government executives have long used the tactic of omitting funding for favored programs to create bargaining chips that can be restored later to extract concessions on other issues.

Asked to comment on Cuomo's omission of Dwyer program funding, Richard Azzopardi, a Cuomo senior adviser, issued an email reply that read ‎”Budget negotiations with the legislature are ongoing.”