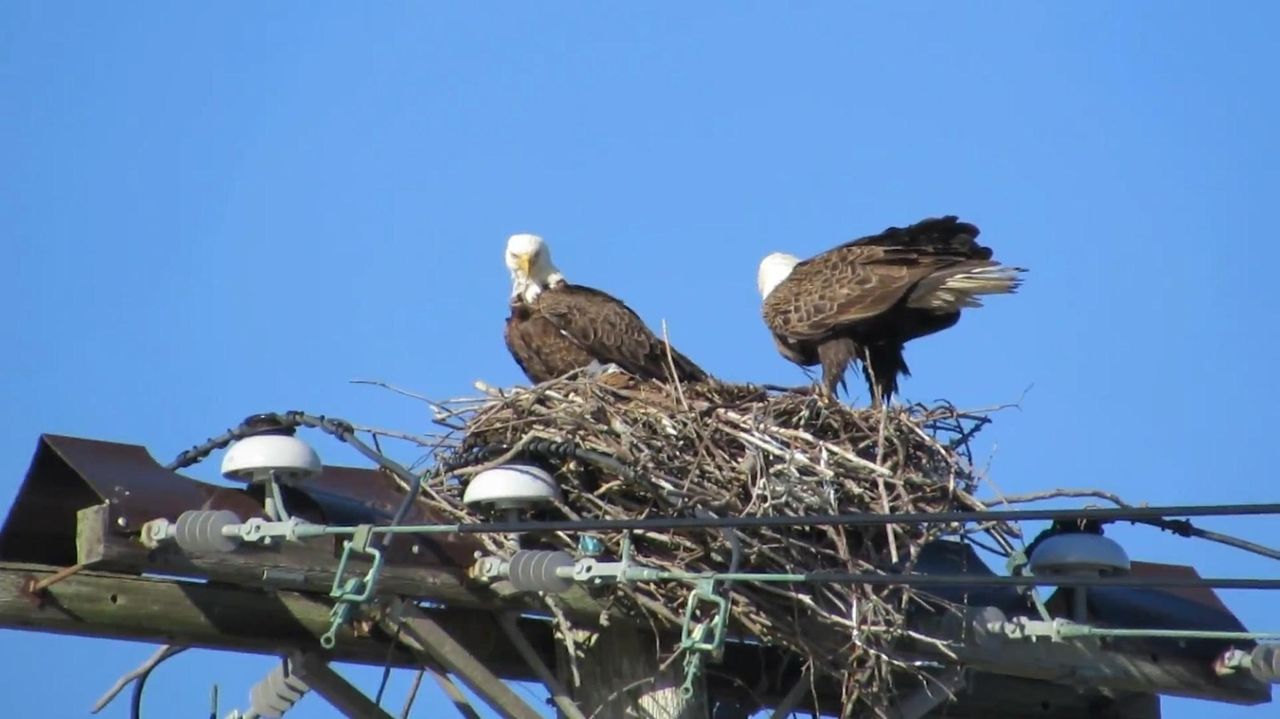 PSEG Long Island sent a crew to Westhampton that specializes in wildlife pole mitigation measures to safely divert high-voltage wires to a new set of cables beneath a bald eagle nest on the 100-foot pole. Credit: Newsday / Mark Harrington

A pair of bald eagles spotted in an osprey nest in Westhampton last weekend was oblivious to the danger that surged just inches below the tuft of branches and twigs: 13,000-volt power lines.

On Wednesday, PSEG Long Island sent a crew that specializes in wildlife pole mitigation measures to safely divert the high-voltage wires to a new set of cables beneath them on the 100-foot pole.

The successful operation was just the latest for the team headed by Patrick Hession, PSEG’s electric service manager for the East End, who has overseen two dozen projects to make equipment safer for osprey and eagles, in some cases transferring delicate nests to new platforms.

They’ve worked on projects from Oyster Bay to Sayville, and on the North Fork in Cutchogue and elsewhere, but the project this week was the farthest south and east they’ve seen eagles thus far, Hession said.

It’s also the first time PSEG has seen in which eagles may be attempting to use an existing osprey nest atop a pole for their own, or using a pole top for a possible nest as osprey commonly do, Hession said.

Eagles have been spotted in Sayville and Blue Point, have nested on the William Floyd Estate in Mastic, and “there are starting to be more sightings on the South Shore” in general, he said.

The nest in Westhampton, near a drawbridge that connects the mainland to Dune Road, was previously moved to wetlands away from the bridge, but the osprey came back in 2019, Hession said.

The plan this year was to put a bird-deterrent on the pole top called a V-guard, which makes it difficult for the birds to land and nest.

“But once we spotted the eagles there everything was stopped and we looped in [local wildlife] regulators to get another solution,” Hession said. That meant diverting the power lines fully beneath the pole top, a solution that prevents any chance of the eagles encountering wires and getting electrocuted.

“The nest should be safe,” Hession said.

Some require pole heights be extended, with a platform for osprey set above the pole. Others have involved shifting the nest off the pole, but nearby enough that the birds can easily find them. “We’ve done a couple of dozen locations islandwide,” Hession said. “It’s an active effort. As soon as we become aware of a location we respond quickly.”

There’s no special budget for the work. It’s part of corrective maintenance budget that PSEG has in place to keep equipment working properly across the region, he said.

But with birds of prey on Long Island, it’s closely watched, important work, he said, a job for which PSEG crews take particular pride.

“The guys that do this work get excited about it,” Hession said. “There’s even some competition to come up with the best designs.”