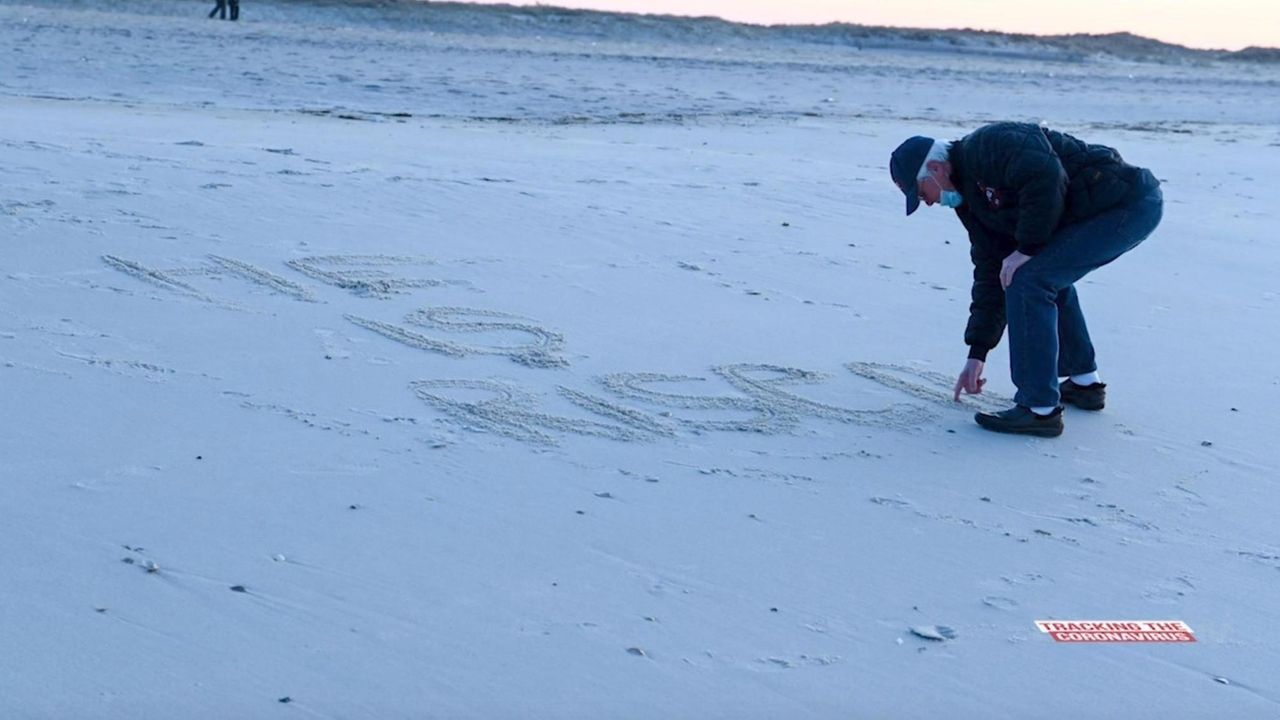 This story was reported by Rachelle Blidner, Vera Chinese and David Schwartz. It was written by Blidner and Chinese.

Christians across Long Island put emoji hands together in prayer and typed their amens in comment sections Sunday as coronavirus forced them to celebrate Easter in a new way.

An early morning service in Glen Cove was livestreamed from a neighbor's front lawn as faith leaders sat in lawn chairs.

A Eucharistic procession in Malverne was held with a pickup truck driving through the village.

Parishioners at a Hempstead church took Communion from their kitchen tables.

Churches that would normally be packed with parishioners were empty, with many services streamed online as leaders offered words of hope and prayers for healing in an otherwise bleak time.

“For Christians, Easter is not canceled,” Father Kevin Dillon, of St. Boniface Martyr Roman Catholic Church in Sea Cliff, said at the Glen Cove service. “Rather than cancel the whole service, we came up with a new way to reach you virtually in your homes and to celebrate the great message that Jesus is alive and risen.”

But some services were canceled, such as a popular annual sunrise one at Jones Beach, where dozens of people still gathered Sunday morning. Part of the state park has been used as a COVID-19 mobile testing site.

At Union Baptist Church in Hempstead, the Rev. Sedgwick V. Easley reminded parishioners that even in these “strange days we are living in” — in a nation beset by loss, transition and grief — Easter is a reminder for Christians that God brings hope. And even those in mourning could find celebration, knowing their loved ones had found God, he said.

Easley mentioned several church families who had lost loved ones to coronavirus or had sick family members and asked people "to pray for those who are dealing with so much sickness and loss." Easley said he learned this week his own cousin had died.

“Here’s what the resurrection reminds us: There is life after death,” Easley told an empty church, save for two musicians. “We’ve still got a hope we can hold onto.”

Easley said parishioners should still count on God, even in these unprecedented times and even when you “feel you’ve been buried by the conditions of life.”

Easley offered a virtual Communion, asking viewers to make their kitchens into an altar and partake with items they have at home.

In a mostly empty St. Agnes Cathedral in Rockville Centre, Bishop John Barres said followers were united in spirit even if their physical beings could not be. He promised they would “walk with Christ” just as Christians have every year since the first Easter — even those hit hardest by the virus.

“The risen Christ is as present to you there as he is here," Barres said of those in hospitals, nursing homes, ICU beds or home quarantine.

Barres also praised medical workers and first responders on the front lines of the crisis for embodying Jesus' message for "your heroic and merciful actions,” Barres said.

In Malverne, Father Michael Duffy held the Eucharist up from the back of a pickup truck, bringing parishioners to their front lawns to watch and pray as it drove through the village, according to video.

“It doesn’t feel like Easter, because the world is on hold. But people were literally crying, getting on their knees, as we were driving,” said Brian Lewis, who drove the pickup.

Duffy, pastor of Our Lady of Lourdes Church in Malverne, described it as the most moving moment in his almost eight years as a priest.

“People always come to the church. Now is the time for the church to go to the people,” he said.

In Glen Cove, an ecumenical service typically hosted by nine churches and held in Morgan Memorial Park was instead livestreamed on Facebook from the front yard of Alba Gamble, 70, who lives across from the park. Just five faith leaders were in physical attendance, sitting on lawn chairs spaced several feet apart. The park, where the service previously has been held, has been closed to curb the spread of the coronavirus.

The hymns were performed a cappella and a lone bag piper performed "Amazing Grace" during the 30-minute service as speakers stressed that the power of God is stronger than the threat of COVID-19.

First Baptist Church of Riverhead held its afternoon service via a telephone conference, where leaders called for prayers for those with COVID-19, including the church's own senior pastor Charles Coverdale, a longtime community leader on Long Island who is expected to make a full recovery alongside his wife Shirley.

Pastor Cynthia Liggon, who is recovering herself from the virus, said in an interview later: "It's times like this that only make our faith stronger. Times like this should bring the best out of us. These times should transform us."