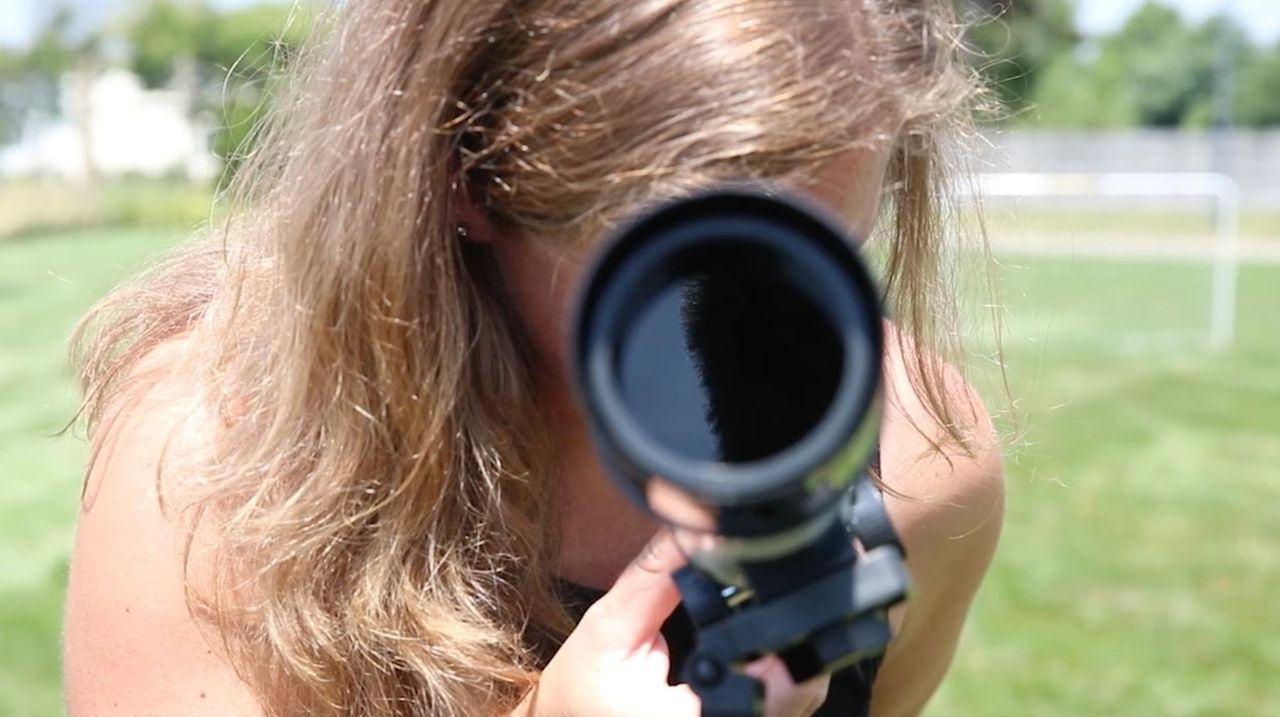 As moths are attracted to light, so are Long Island sky watchers gravitating to a narrow corridor of the country, running diagonally from Oregon across to South Carolina, along which the sky goes dark during daylight hours on Aug. 21.

That’s when, in a much anticipated celestial lineup, the sun, moon and Earth align, with the moon blocking the sun and casting its moon shadow on Earth in a total eclipse of the sun.

For Long Islanders, the view will be partial, with just over 70 percent of the sun blocked out at the peak time of 2:46 p.m., according to Timeanddate.com, a site that provides data on time, calendars and astronomical phenomena.

With eclipse-chasers and others being drawn from around the world, accommodations are pretty much booked all along that 70 mile or so wide stretch where the total eclipse can be viewed, said Sue Rose, of East Meadow, a retired air traffic controller and president of the Amateur Observers’ Society of New York.

In fact, she said, “it’s already predicted to be the largest traffic jam in the history of the world.”

Rose, 64, made her reservations two years ago for a trip to Casper, Wyoming. That’s the location chosen by the Astronomical League, an umbrella group of amateur societies, for its annual convention timed to the cosmic event that has sky watchers quivering with expectation.

“You can feel the anticipation in the air when you’re near anyone who knows about the event,” Rose said. “My eyes are welling up just thinking about it.”

That’s with good reason, as this is the first total solar eclipse to sweep across the entire country, from sea to sea, since 1918, according to GreatAmericanEclipse.com, a site featuring eclipse maps and animations.

For those on Long Island, it’s coming up on 100 years since a solar eclipse delivered totality to the New York City area on Jan. 24, 1925. At that time scientists in East Hampton — then spelled Easthampton — described the sea taking on a reddish hue as the sky darkened and temperature dropped more than 3 degrees, The New York Times reported.

Frederick Walter, professor of astronomy at Stony Brook University, points to a more recent eclipse in which the narrow band of totality traveled across Florida on March 7, 1970, then headed up the waters just off the East Coast.

Long Islanders got a great view of that eclipse, he said, which was referred to in a Newsday headline as the “sun’s big wink.”

Walter said Wyoming will probably be too crowded for his taste, so he will be experiencing this year’s totality from a spot near Alliance, Nebraska.

“Any description or photo of a total solar eclipse doesn’t do it justice,” said Rose, for whom the one in three weeks will be the fourth she has experienced, having traveled to Montana in 1979, Mexico in 1991 and the Caribbean in 1998.

“It brings tears to the eyes, goose bumps, adrenaline pumping heart palpitations, stimulation to all the senses,” she said. “That’s why I say you have to be there.”

It was close to 20 years ago at the total eclipse in the Caribbean that she and her now late husband started planning for this year’s celestial event, “and I expect his spirit will be there with me,” she said.

For Stephanie Burns, 37, earth science and astronomy teacher at Connetquot High School in Bohemia, this will be her first time viewing totality.

She and her family are heading to a small town just outside of Nashville, which offers additional entertainment activities for Burns’ husband and two daughters, ages 5 and 7.

As a former broadcast meteorologist and “a super planner,” she’s also booked a backup site for viewing, should weather be less than accommodating in the Tennessee area. That’s a campsite in far western Missouri.

Globally, “very few people are going to ever experience this” in their lifetimes, Burns said, as so many total eclipses happen over uninhabited areas or oceans.

Having seen partial eclipses, she said she has heard how experiencing totality can be a “life altering event.”

“I want to see what it’s all about,” she said, because a partial view — “that’s not good enough.”

And, yes, weather is a wild card, even for those who have opted for one of the locations that forecasters say have the best chance for clear skies.

Based on past cloud conditions for Aug. 21, areas near both coasts appear to be more susceptible to cloud cover, as well as areas east of the Mississippi, according to the National Oceanic and Atmospheric Administration.

Gary Citro, 55, of Hicksville, said he knew 10 years ago he would be traveling to experience totality, more recently deciding to play it safe and head with his wife and two children to Wyoming, which was chosen by the Astronomical League.

Casper is one of the sites, along with Lincoln, Nebraska, and Carbondale, Illinois, that NOAA says “holds promise,” at least historically, for clearer skies.

Still, Citro said he is prepared to be mobile. If the “heavy hitters” in attendance deem skies will be more favorable in other reachable locations, he is prepared to grab the eclipse glasses, solar-filter binoculars and solar telescope, saying he will be “hopping in the car and following that caravan.”

With his son, age 9, and daughter, 14, he said he is especially hoping to create a family memory. “If it’s cloudy and we miss that, I’m going to be pretty bummed out,” said Citro, a public school music teacher.

For those viewing on Long Island, even clear skies of the partial view will not come close to the impact of totality, Rose said. Just keep in mind that viewing 30 percent of a really bright sun is still going to be extremely bright.

Which brings up the total necessity of wearing special eclipse glasses — no sunglasses or makeshift gear — to protect eyes from the sun’s harmful rays. Those viewing totality may be able briefly to go glasses-free for the few minutes when the sun goes dark, but Long Islanders will need to protect their eyes for the entire event, starting at around 1:24 p.m. and lasting until 4:01 p.m. Eclipse glasses can be ordered online, with the American Astronomical Society pointing to a number of reputable sources on its website.

For the past two school years, Burns, 37, has passed out eclipse glasses to her students and trained them in their proper use.

Her message has been that to avoid “severe, irreparable eye damage,” it’s essential to use eye protection “the entire time when viewing the eclipse from here in the tristate area.”

She is also been talking the event up through the school year, with the goal that students remember that this celestial phenomenon is occurring on Aug. 21.

Should they miss this one, however, they can look forward to the next total eclipse in North America on April 8, 2024, with that narrow corridor of totality passing closer to home — over upstate New York.