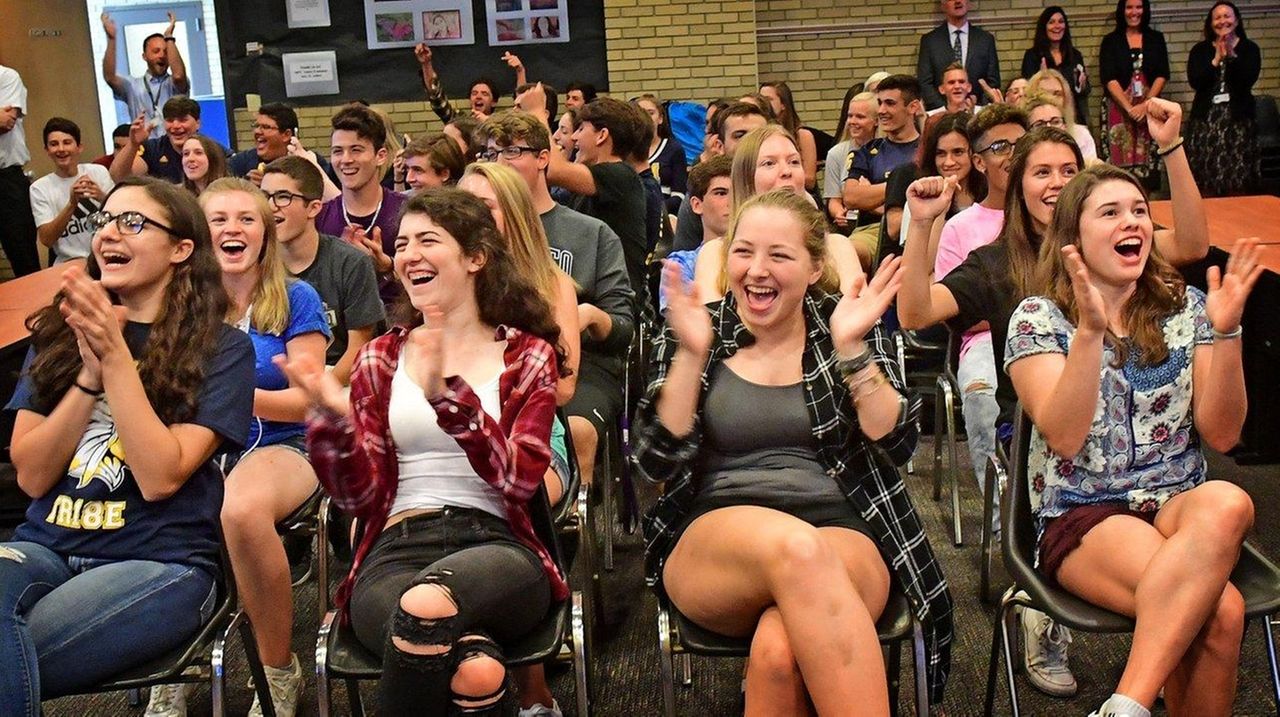 It was a party-like atmosphere at Massapequa High School as students and faculty reacted to the announcement that their school was named a National Blue Ribbon School by the U.S. Department of Education on Thursday, Sept. 28, 2017. The National Blue Ribbon Schools Program, launched in 1982, is the federal government's best-known recognition system for schools that demonstrate academic achievement or improvement. Public and nonpublic schools may be nominated only once within a five-year period. Credit: Newsday / Thomas A. Ferrara

Five high schools on Long Island were named 2017 National Blue Ribbon Schools on Thursday by the U.S. Department of Education.

They were among 19 schools in New York to earn the distinction and 342 schools recognized nationwide. Last year, Harborfields High School in Greenlawn and Syosset High School were named.

“National Blue Ribbon Schools are active demonstrations of preparing every child for a bright future,” Education Secretary Betsy DeVos said in a live video address from Washington, D.C., as the announcement was made.

Bayport-Blue Point educators said they believed the high school’s honor is the first time a district school has been named a National Blue Ribbon School. They credited a tradition of excellence in the system.

“We have a long history of high achievement and we focused in on challenging kids,” high school principal Gaurav Passi said, noting that the institution made College Board’s Advanced Placement district honor roll.

The National Blue Ribbon Schools Program, launched in 1982, is the federal government’s best-known recognition system for schools that demonstrate academic achievement or improvement. Public and nonpublic schools may be nominated only once within a five-year period.

The New York schools were nominated by the state Education Department. Each nominee must complete an extensive application and review process.

In Massapequa, Superintendent Lucille Iconis said the recognition is “an honor” for the entire district.

“Every segment of our school community, from administrators to teachers to parents to students, worked together to achieve this,” she said.

Review of the high school, which serves grades 10 through 12, considered a variety of factors, including its graduation rate and students’ achievement on Advanced Placement courses, attendance and post-high school plans.

Massapequa High was the second school in the district to be designated as a Blue Ribbon School of Excellence. East Lake Elementary received the honor in 2005 when Iconis was principal.

At Herricks High School, “We really focus on educating the whole child, and as a result I think we have a wonderful climate in our high school where kids work hard and it is cool to be smart,” Superintendent Fino Celano said, adding that the honor reflects the hard work of students and staff.

The district’s middle school was named a National Blue Ribbon School in 1997.

Nanine McLaughlin, principal of Garden City High School, noted that the school has bolstered efforts to prepare students for college, with focused coursework that starts in middle school.

Garden City Middle School was recognized as a Blue Ribbon School in 2008, as was its forerunner, Garden City Junior High School, in 1984-85.

“Most of our students go on to college,” McLaughlin said. “We want to make sure every student is equipped to do so.”

Earl L. Vandermeulen High School, with an enrollment of 384 students, was one of the smaller of this year’s Long Island honorees.

“We take into consideration what they [students] are looking for across all spectrums,” Principal Christine Austen said. “We build a schedule and a program around their wants and needs.”