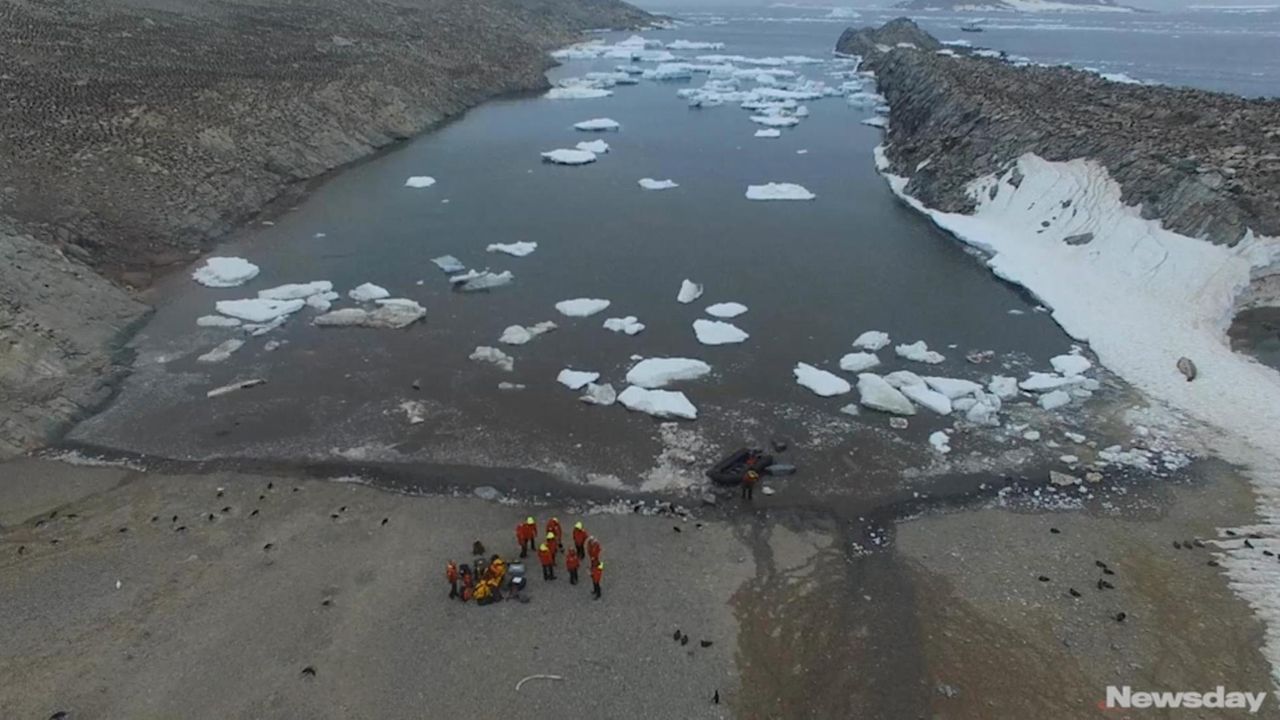 A vast new "supercolony" of 1.5 million Adélie penguins has been found on the Antarctic Peninsula by a Stony Brook University scientist and her team of collaborators in a discovery that surprisingly adds to the known Adélie population, which has been steeply declining. Credit: © WHOI, Northeastern University, Courtesy Thomas Sayre McChord, Hanumant Singh

A vast new “supercolony” of 1.5 million Adélie penguins has been found by a Stony Brook University scientist and her team of collaborators in a discovery that surprisingly adds to the known Adélie population, which has been steeply declining.

Heather Lynch, an associate professor of ecology and evolution, said the first tip-off to the massive colony of tuxedoed birds was when satellite data relayed evidence of their telltale pink poop stains. The massive amounts of guano were a sign to scientists that the Adélie were alive and well in one of the most isolated regions of Antarctica, a rocky archipelago called the Danger Islands.

The birds’ guano has the light-colored tinge because of the krill, a type of fish they heartily consume, Lynch said.

“It will be years before we analyze all of this data,” Lynch said of both the satellite research and expedition data that brought the intrepid team of researchers face-to-face with a previously unknown population of Adélie penguins.

Lynch and her collegues at Woods Hole Oceanographic Institution, Oxford University and Louisiana State University wrote about their penguin research in the journal Scientific Reports, which was published Friday.

The expedition, which occurred in late 2015, included several Stony Brook graduate students, who went to the Danger Islands to study the newly found supercolony up close. The team also used drone technology to fly over the archipelago to help scientists conduct an Adélies census.

For the past 40 years, the total number of Adélie penguins — one of the most common on the Antarctic Peninsula — had been steadily declining until the pink poop led scientific thinking in the opposite direction.

The Adélie were discovered inhabiting a remote and icy island chain on Antarctica’s northern tip, a region of the Antarctic peninsula that juts toward South America. The archipelago is an unworldly scene of ice floes and a landscape devoid of vegetation. It is near the Weddell Sea where explorer Sir Ernest Shackleton and his ship were stranded in 1915.

“We were using this kind of old, government satellite technology, the Landsat,” Lynch said of the Earth-observing satellite system operated jointly by the U.S. Geological Survey and NASA. Landsat satellites provide what is called moderate-resolution images, which Lynch described as course and grainy.

The images were sound enough, however, to warrant expansion of the research into an expedition.

“Until recently, the Danger Islands weren’t known to be an important penguin habitat, Lynch said, and there is no evidence that the Adélie had traveled to archipelago to escape warming conditions elsewhere in Antarctica — a factor that Lynch said explains why the penguins have been vanishing in other parts of Antarctica.

“We don’t have any reason to believe there was a movement of the population,” she added. “And [this discovery] doesn’t change our picture about climate change and Adélie penguins. That is all still happening.”

Michael Polito, a co-author of the research at Louisiana State, said,“Not only do the Danger Islands hold the largest population of Adélie penguins on the Antarctic Peninsula, they also appear to have not suffered the population declines found along the western side of Antarctic Peninsula that are associated with recent climate change.”

The Adélie penguins are a subpopulation of the flightless seabirds whose habitat is the entire Antarctic coast. Their numbers had been diminishing for 40 years, mostly because of warming temperatures.

A new supercolony of 1.5 million of Adélies went undiscovered partly because of the remoteness of the Danger Islands they’ve recently been found to inhabit, and the treacherous waters surrounding them. Even in the austral summer, the nearby ocean is filled with thick sea ice.

Adélies get their name from the wife of French explorer Jules Dumont D’Urville, who was the first to document their presence in 1840. Her name was Adéle.

Adélie penguins have a distinctive white ring around their eyes

Other penguin populations in Antarctica include the Gentoo, Chinstrap and Emperor penguins.