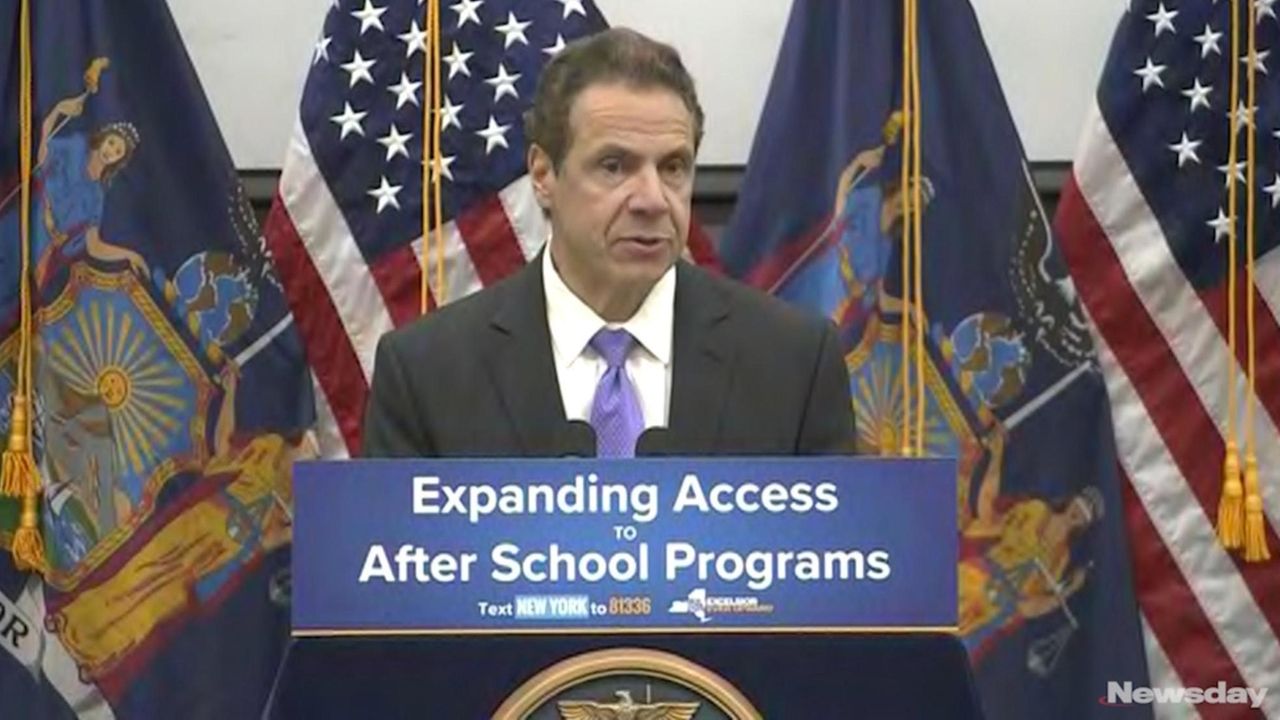 Gov. Andrew M. Cuomo spotlighted the benefits of a new state after-school program Thursday during a stop in Hempstead, and took a swipe at a Republican-initiated federal tax bill that he said would be “devastating” to families in Nassau and Suffolk counties.

The governor, appearing before a capacity crowd of educators and students at Alverta B. Gray Schultz Middle School in Hempstead, said the new extended-day program would help students compete with counterparts in schools overseas that he said often operate from 7 a.m. to 7 p.m.

“You want to keep up with your competitors,” Cuomo said. “This is the game.”

Statewide, $35 million in after-school funding added to the 2017-18 budget will boost enrollment in such programs by 36 percent, the administration said. The portion of the money to schools on the Island — $2.8 million — covers services for 877 additional students in Hempstead and 885 in Uniondale.

Cuomo, at a news conference after his school appearance, lashed out at members of the U.S. House of Representatives, especially upstate New York Republicans, who passed a tax bill Thursday by a vote of 227-205.

Opponents have contended that the measure would hurt many residents of high-tax states such as New York and California by eliminating deductions for state and local taxes. Supporters have countered that the bill would stimulate the economy nationwide by cutting burdensome business taxes.

Similar legislation faces a more uncertain reception in the Senate, where one GOP senator has voiced opposition and several others have expressed reservations. In that chamber, Republicans have a slim 52-seat majority.

“They’re using New York as a piggy bank to finance the tax cut for corporations,” said Cuomo, a Democrat. “It’s disgusting. I only hope the Senate can stop it.”

The governor appeared earlier Thursday at schools in Buffalo and Monticello, where he sounded the same twin messages.

In dollar terms, after-school funding pales in comparison with the billions distributed by Albany each year to 700-plus local school districts across the state, including 124 in Nassau and Suffolk counties. Supporters say that tutoring and other services provided after regular school hours have an outsized impact on students served.

To be eligible for funding, more than 30 percent or at least 5,000 of a district’s students must be economically disadvantaged, such as those participating in free or reduced-lunch programs or other assistance programs. The multiyear grants provide $1,600 per student.

“After-school programs for kids are really important,” said Jack Bierwirth, a former Herricks school superintendent who now serves as a special state consultant, known as a distinguished educator, in Hempstead.

Bierwirth said he would recommend that some of Hempstead’s share of the funding be used to establish would he described as “homework help” clubs.