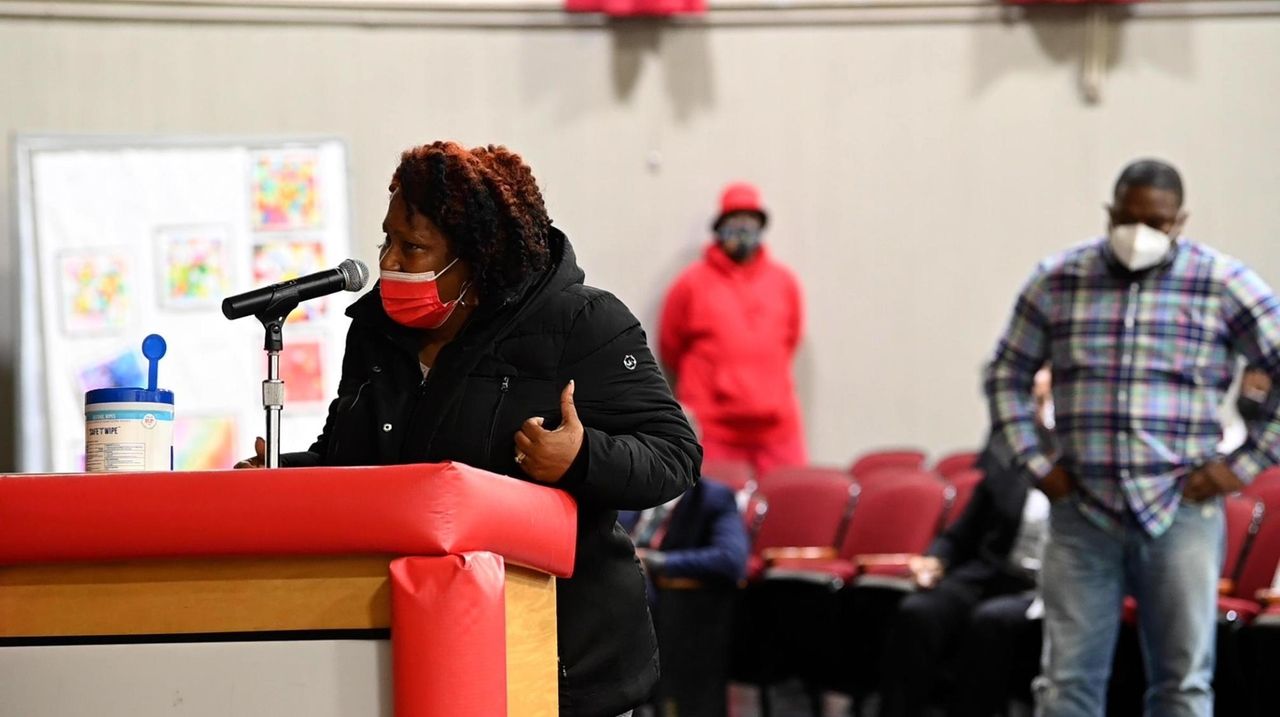 The Amityville school district on Wednesday held a board meeting that was attended by community members and representatives of the Central Long Island NAACP branch to discuss a high school staff member who allegedly made a racist comment during a school football game. Many at the meeting called for the staff member to be fired. Credit: Newsday / Thomas A. Ferrara

An Amityville Memorial High School staffer allegedly made a "disturbing and derogatory" comment toward Black players during a livestream of the school's football game last month and has been banned from the campus while the incident is investigated, according to Superintendent Mary T. Kelly and Long Island NAACP officials.

The comment, made by a white teacher during Amityville's April 24 game against Commack High School, used racially insensitive stereotypes, according to the Rev. Saba Mchunguzi, president of the Central Long Island NAACP branch.

In a statement read aloud during a special meeting of the Board of Education Wednesday night at the high school, board president Terry Fulton said the board was "aware of allegations a district teacher made offensive remarks during a district activity" and said he and fellow members vowed to provide a school environment free of bigotry and discrimination.

"This matter has been turned over to the superintendent for a prompt and thorough investigation. This matter will reflect the gravity of this situation," Fulton said. "The board of education does not comment on personnel matters, but the board expects teachers to act as role models and uphold board policies against racism, intolerance, discrimination and social injustice."

More than 50 people in the audience at the board meeting applauded.

The board will release the findings of its investigation at its May 12 meeting, Fulton said.

A flyer made by Mchunguzi's branch had urged members of the community to attend the meeting to "stand up against hateful language towards our students." The branch has also sent the school district a letter identifying their concerns around the incident.

"Who in the world would do that in 2021? It’s totally unacceptable," Mchunguzi said as he gathered with others outside the school before the meeting. "The school community should not be OK with this. This mindset is totally not acceptable to us and should not be acceptable for other school officials."

In her own letter posted on the district's website Monday, Kelly said the staff member who allegedly made the remark was removed from school grounds and an investigation is ongoing.

"This individual does not speak on behalf of our school district," Kelly wrote. "We find the alleged statement to be reprehensible and not aligned with Amityville’s values. While we understand and sympathize with the anger and sadness being expressed by those in our community, the district must follow proper procedures. As a public employee, this individual is entitled to due process and the district must abide by all relevant procedures."

Earlier Wednesday, Mchunguzi said the alleged racist comment during a livestream of the game was made after a Black player on the Amityville football team scored a touchdown. Multiple people heard the comment and a recording was briefly posted online before being taken down, he said.

The Amityville School District's student population is 90% Black or Hispanic, according to State Education Department data.

The superintendent declined to identify the staffer, who she said had been assigned to work at home and will not be allowed on school property until the investigation is complete.

Kelly declined to comment further about the incident Wednesday but said through a spokeswoman that "the district embraces our diverse community and remains fully committed to providing an instructional setting that supports the social, emotional and academic needs of all of our students."