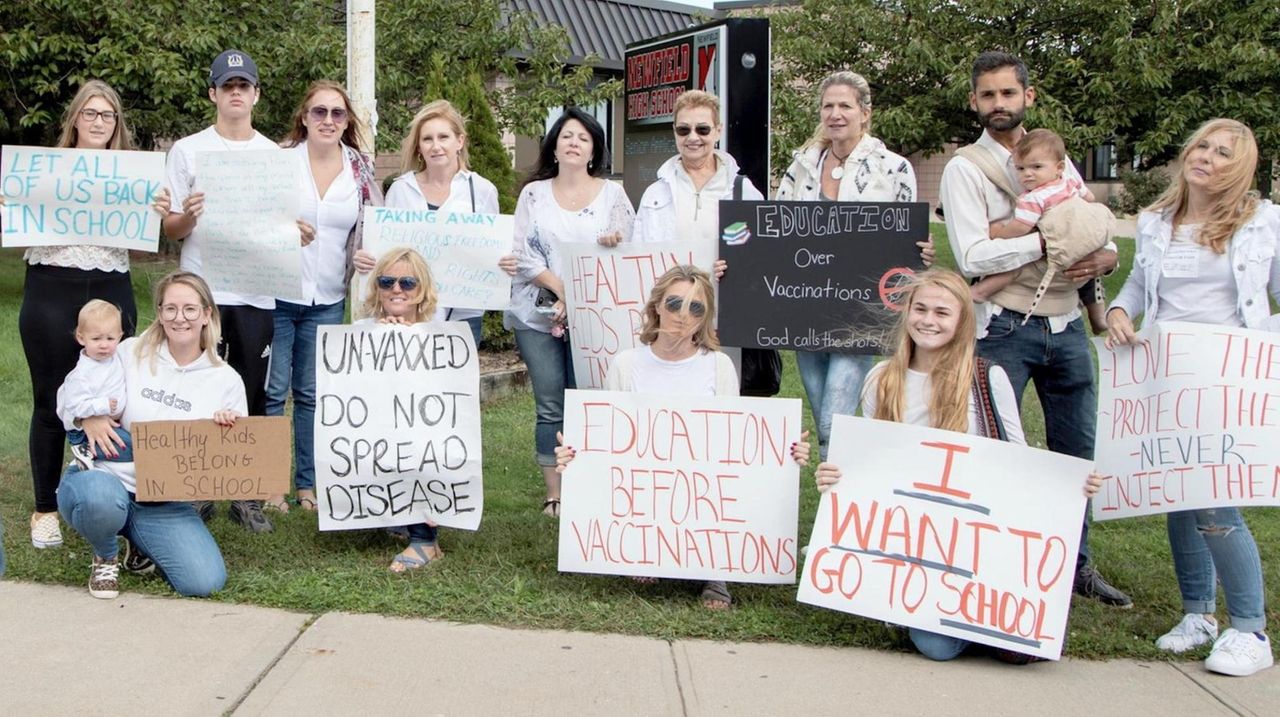 Dominique Nuzzi, a senior at Newfield High School in Selden, has refused to get a vaccination and is not allowed to come back to school. On Wednesday, she was sent to the school's auditorium, where she stayed until her mother picked her up.  Credit: Newsday / Yeong-Ung Yang

About a hundred chanting parents and others waving signs that declared "Hands off my kids" and "All kids belong in school" demonstrated Wednesday afternoon outside a college ballroom on Long Island where Gov. Andrew M. Cuomo delivered a speech on school gun safety.

Smaller protests, also organized by opponents of a new state law on school vaccinations, were held at three local public schools earlier in the day.

At Farmingdale State College, state troopers kept watch on demonstrators who lined a hallway at the Campus Center where Cuomo delivered his speech starting at 4:30 p.m. Protesters were not allowed into the ballroom auditorium itself, but their shouts could clearly be heard inside.

The governor did not mention the protests or the vaccination issue during his talk, which drew an audience of several hundred. But after the talk, Cuomo’s office released an excerpt from one of the governor’s recent radio interviews in which he said in regard to the vaccinations that “public health means you have to weigh the health risk for all children, not just one religion, not just parents with one belief system.”

Elsewhere on the Island, opposition to the law, which abolishes religious exemptions to vaccinations for students, spread to two more Long Island school districts Wednesday, and police appeared at one school, though no arrests were made.

At least seven unvaccinated students entered Newfield High School in the Middle Country district, but were intercepted by security guards and sent to an auditorium to stay by themselves until parents picked them up, local officials said.

Demonstrators also gathered in front of Rocky Point Middle School and Joseph A. Edgar Intermediate School, both in the Rocky Point district. Suffolk County police were called to the intermediate building by a passing motorist who complained that traffic was being blocked, but no arrests were made, a police spokeswoman said.

Roberta Gerold, superintendent of Middle Country schools, said protesters were treated with respect and allowed to stay on school grounds for several hours. A spokeswoman for the Rocky Point district, Jessica Novins, declined to comment.

A law abolishing student waivers from inoculations on religious grounds was approved by state lawmakers in June, amid the worst measles outbreak in the nation in 27 years. Cuomo, in signing the bill, noted that 96 percent of school-age children statewide already were inoculated against measles, mumps and rubella.

About 26,000 students statewide, including an estimated 4,000 in Nassau and Suffolk counties, had been covered by religious exemptions in the past. This year, such families were notified in advance that they would have to arrange for vaccinations within 14 days of class openings.

"I should have a right to choose," said Dominique Nuzzi, 16, a 12th-grader who had been attending classes at Newfield High in Selden until Wednesday, when she was told by school authorities she could no longer stay. "I've never had any real sicknesses."

Nuzzi was among the students confined to the school's auditorium until arrangements were made for her departure. She was described by her parents as an "A" student who lacked only one-half of a course credit to graduate, and who played a variety of sports, including lacrosse and volleyball.

"She has a right to a free public education," said her mother, Deborah Nuzzi, who stood outside the high school with about 15 other parents and other supporters.

Gerold, in a phone interview, said the district did its best to deal tactfully with parents, while also safeguarding students.

"I think we were respectful of the parents' position, but we are required to follow state law," Gerold said.

The Centers for Disease Control and Prevention, based in Atlanta, strongly recommends children's vaccinations on the grounds that this "can prevent infectious diseases that once killed or harmed many infants, children and adults."