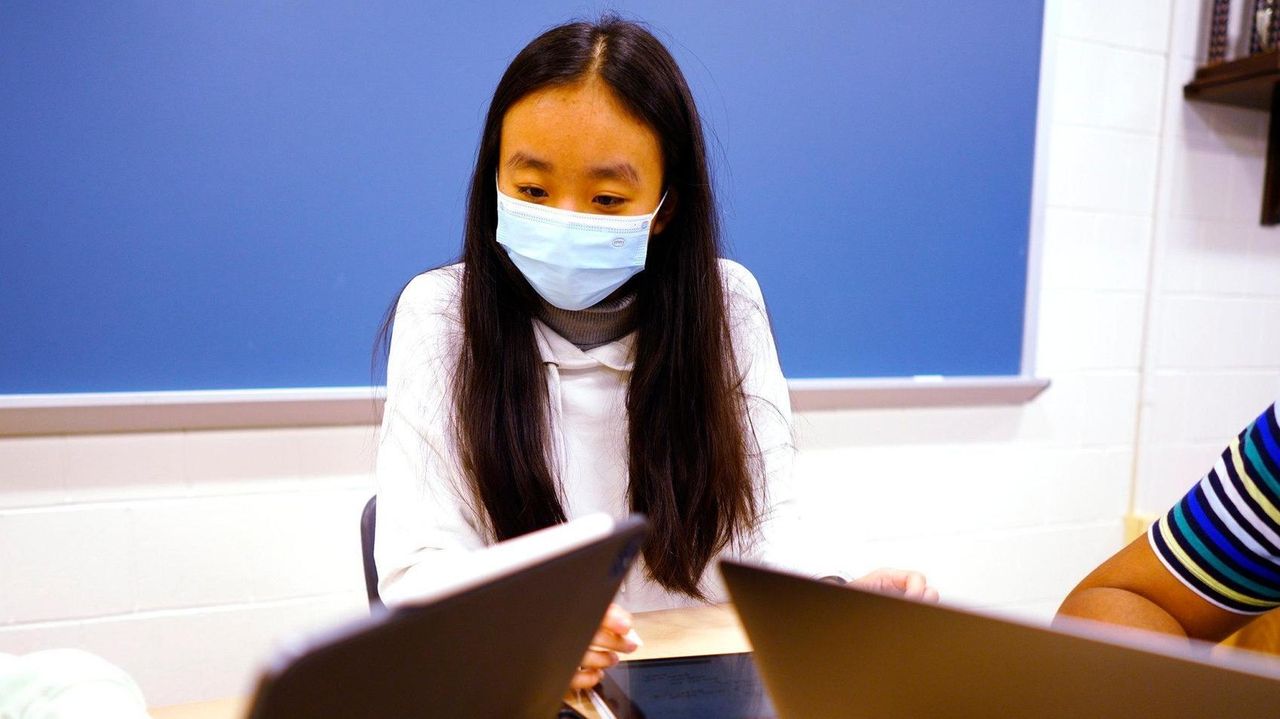 Long Island school districts rank No. 1 statewide in student achievement on college-level coursework and exams, with participation holding steady in the face of the COVID-19 pandemic, a Newsday analysis found.

The region's performance is detailed in a new report on Advanced Placement tests taken last spring in more than 600 districts statewide, including 98 in the Nassau-Suffolk region. The program known as AP is sponsored by the Manhattan-based College Board, which is the biggest provider of college-level courses and exams aimed at high schools.

The Island also had nearly half of all districts scoring in the top 10% statewide, with a total of 29 out of 60.

Islandwide, the number of college-level exams taken in high schools rose slightly in 2021, despite the impact of the COVID-19 pandemic that often forced students to work remotely at home.

AP offers 38 courses, in subjects ranging from art history and music theory to computer science and physics, typically culminating in exams of about three hours each.

The report, provided by the state Education Department at Newsday's request, showed that the five highest-achieving districts were in Nassau County. Jericho held the No. 1 spot, as it consistently has in recent years, followed by East Williston, Manhasset, Herricks and Great Neck.

Among the districts scoring in the top 10% statewide, the Island had nearly half, with 29 school systems out of 60. These included clusters of districts along the Island's northwestern sector: Port Washington, Roslyn, Syosset, Cold Spring Harbor, Harborfields and Elwood.

Other standouts included Garden City, Bellmore-Merrick, Plainview-Old Bethpage and Half Hollow Hills, as well as Bayport-Blue Point, Port Jefferson and Westhampton Beach to the east.

Another group of high achievers were districts offering International Baccalaureate courses and exams, including Rockville Centre, North Shore, Locust Valley, Long Beach, Commack and Sag Harbor. The IB program is sponsored by a foundation based in Geneva, Switzerland, and offers college coursework for high school students, as well as curricula for the middle grades and primary levels.

Last spring, in the midst of the pandemic, students across Long Island took a total of 84,794 AP and IB exams, according to Newsday's analysis. That number of tests was up slightly from the 84,257 tests taken in spring of 2018, the latest year for which pre-pandemic data is available.

Strong showings on AP and IB exams are a source of regional pride for the Island's educational leaders, and a prime reason why their districts appear prominently in national rankings sponsored by media outlets such as The Washington Post and U.S. News & World Report.

Henry Grishman, longtime superintendent of Jericho schools and a former president of the New York State Council of School Superintendents, described the Island as a region that "shines above just about every other suburban community in the United States."

Grishman, in an interview, noted that Jericho offers what he described as an "incredible smorgasbord" of 30 AP courses. He added that so many of Jericho High School's students skip lunch in order to take additional courses that the district is considering rule changes to provide more free time.

Grishman attributed much of the Island's growth in college-level coursework to decisions taken by districts more than a decade ago to open enrollment to any students willing to take on the extra work. He added that the recent uptick in COVID-19 infections, while a challenge for teachers and students, had not reversed the movement.

"That number consistently increases every year in terms of the number of exams we give, the number of kids enrolled in AP classes, and our initial projection is that the number will increase in May of 2022 as well," Grishman said.

Timothy Russo, principal of Harborfields High School and a former teacher of AP European history, agreed that the move toward open enrollment has contributed to the program's expansion in districts across Nassau and Suffolk counties.

"You know, they routinely rank percentage-wise among the best in the state, and I think everybody on Long Island takes great pride in what we've done here educationally," Russo said.

Newsday, in its analysis, divided the number of tests passed in each district by 12th-grade enrollment. This created per capita ratios — a commonly used statistical tool that allows for uniform rankings of districts with different-sized enrollments.

A ratio of 1.00 indicated the equivalent of one exam taken and passed for every 12th-grader enrolled in a district. A ratio of 1.70 or higher ranked a district in the top 10%.

Challenges through a pandemic

At the beginning of the 2020-21 school term, most of the Island's high schools responded to the pandemic by operating classes on a hybrid system that had students attending classes in school one day, then working remotely at home the next. For many teachers, this meant teaching about a dozen students working in a school classroom, while trying to keep track simultaneously of another dozen working online and remotely at home.

"For me, being back in person, all the kids in class together, there's an energy that you can't duplicate virtually," said Matthew DeMarinis, who teaches AP statistics at Jericho High School and was named Nassau Math Teacher of the Year in 2016.

For teacher Adam Bowman, "Being online was this weird type of dark prison where you really couldn't see students as well as you wanted to. The interaction was minimal.

"When we're here in the classroom, it's basically the complete opposite," added Bowman, who teaches AP English language and composition at Uniondale High School. "I've got students who are alert and awake and engaged and just bring all of that out of me, also."

Anna Gosselin, 17, is taking AP courses this year in statistics, English language and literature, and U.S. government and politics, after completing four such courses in years past. She's also an AP Scholar with Honor, a designation given students who pass at least four college-level exams with scores averaging 3.25 on a scale of 1 to 5.

"It took a lot more discipline, because you had to do everything on your own terms, like there was no one really holding you accountable," said Gosselin, a senior at Harborfields High School, recalling her experience last year.

While AP and IB testing remains strong, student participation in some forms of state-sponsored testing has plummeted. Most recently, state education authorities announced cancellation of Regents exams that had been scheduled for Jan. 25-28, due to the pandemic.

Motivated by the extra challenge

Many high school students said they're motivated by the extra challenge provided by AP and IB programs.

"I want to see how far I can go and push myself," said Raveena Ramnauth, 17, a senior at Malverne High School. She is enrolled in five AP courses this year, and completed seven such courses in years past.

A classmate, Austin Cange, 17, who has signed up for four AP classes this year and already completed six, observed that a long homework session can make it difficult to get up for a first-period class the next morning.

"You've been studying all night, and you want to just sleep in more," Cange said. "But you know after awhile, you just have to realize, 'I'm taking these courses. I have to focus,' and sometimes, if I don't get enough sleep, it's all right."

Both Ramnauth and Cange are AP Scholars with Distinction, a designation granted to those completing at least five exams with scores averaging 3.5.

Lorna Lewis, Malverne's superintendent, pointed out that her district ranks in the top 10% statewide in terms of AP performance, despite the fact that half its 1,700 students qualify for subsidized lunches due to modest family incomes. Lewis added that 78% of the district's enrollment consists of students of color, mostly Black or Hispanic.

"We are a very diverse, multiethnic district, and the performances of the students are beyond expectations," Lewis said in an interview. "If we can do this, it can happen anywhere."

One incentive, students noted, is that scoring high on AP tests can earn college credits and save money once they enroll in college. Another motivation upon entering college is the opportunity to skip introductory courses and go straight into upper-level classes.

Reynaldo Marquez, 16, an 11th-grader at Uniondale High School, offered another reason for advanced studies. Last year, he signed up for "AP Seminar," a yearlong course that prepares students for researching subjects and presenting their findings to audiences, both individually and as part of teams.

"In the future, I can, like, use those skills for a job," Marquez said. "The main reason I took it is that AP Seminar is mostly about presenting, and I want to do something related to business. And in business, I might have to present new products."

Despite the Island's successes with AP and IB programs, there are some troubling developments.

New York State has slipped in recent years in national rankings based on percentages of students passing AP courses. New York used to rank first or second among states but gradually has dropped to eighth, as states such as Florida and Maryland upped their game.

In addition, the Island long has experienced gaps between districts in performance on advanced coursework, based largely on differences in wealth.

A notable example is Wyandanch, one of the region's poorest districts in terms of taxable property and income. Wyandanch is the only system in the region with a high school that provides no AP or IB program where students can match their skills against a national or international standard.

Gina Talbert, superintendent of Wyandanch schools, said her district does provide college experience to interested students in the form of a partnership with Farmingdale State College, where participants can earn 18 to 21 free credit hours. The district is preparing a similar arrangement with Suffolk County Community College, where students would pay a small fee, Talbert said.

"We feel that these programs are more beneficial to our students, rather than relying solely on a single test offered one day per year in order to receive AP credit," Talbert said in a statement to Newsday.