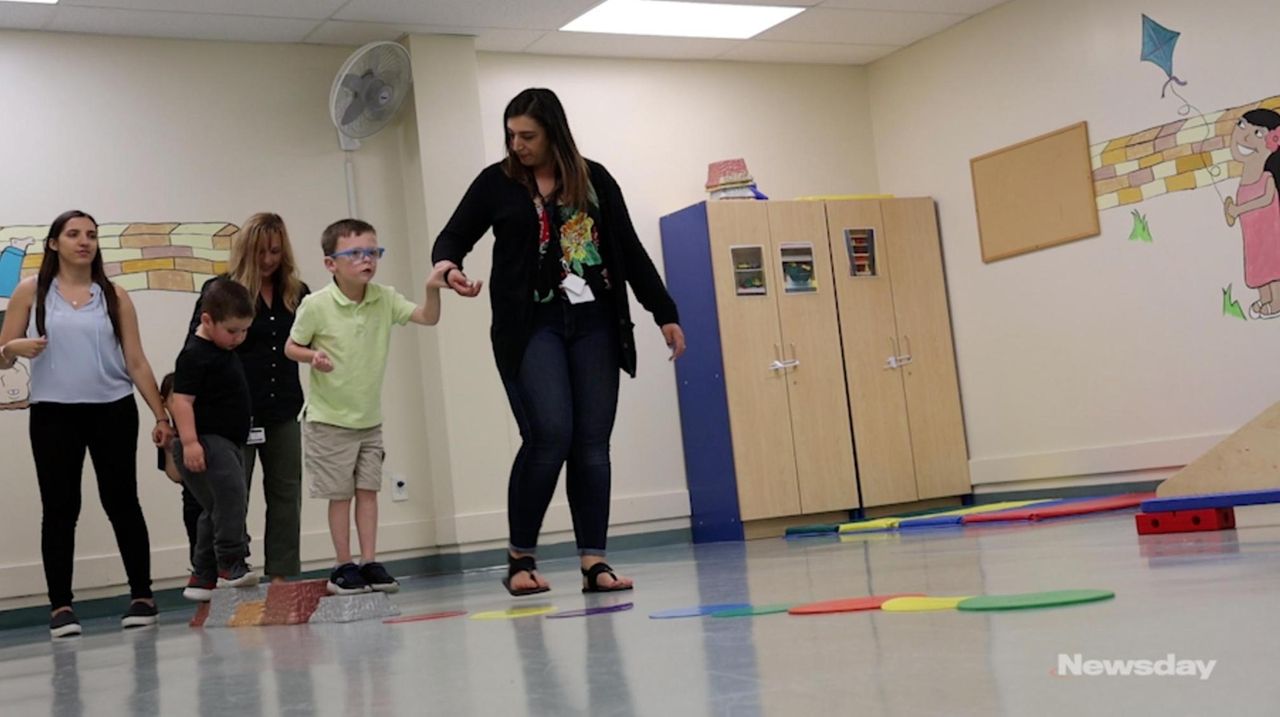 Nesconset's Jack Nordin, 5, who has autism, has progressed markedly since he began attending the Developmental Disabilities Institute's Early Childhood Learning Center in Ronkonkoma in September 2017. He is set to graduate from the learning center in August and enter kindergarten in the Smithtown district in September. Credit: Newsday / Alejandra Villa

Jack Nordin was 11 months old in spring 2015 when his parents, Erika and Christopher Nordin, recognized his development was not progressing as it should.

The feeling was familiar to the Nesconset couple. Just a few months earlier, Jack’s brother, Chase, who is 16 months older, had been diagnosed with autism spectrum disorder after he did not reach motor and verbal bench marks as expected.

Jack's behaviors were similarly delayed, and his parents moved quickly to seek help. Today, Jack is 5 — he celebrated his birthday on May 13 — and he speaks in full sentences and reads. After two years at a preschool that specializes in services for children with developmental disabilities, he will start kindergarten in the Smithtown school district in September.

The Nordin family's experience is a testament to the power and effectiveness of early intervention. The state- and county-funded services their boys have received made all the difference, the parents said.

According to the national Centers for Disease Control and Prevention, autism can be detected at 18 months or younger, and by age 2 a diagnosis can be considered “very reliable.” For kids living with developmental disabilities, identifying challenges and seeking assistance early is the key to progress.

“We were familiar with his delays because they were similar to his older brother’s,” Erika Nordin said of Jack.

Chase was born in 2013. At about 12 months, he wasn't crawling — development that usually occurs between 7 and 10 months old, although experts caution that some children skip crawling and go straight to walking. The Nordins sought assistance through the state’s Early Intervention Program, and Chase qualified for physical therapy. A few months later, he began speech and occupational therapies, too. At age 2, Chase was diagnosed with autism.

Jack followed a similar developmental pattern and qualified for the same services. He also was diagnosed with autism spectrum disorder at age 2.

In the first years of the boys’ lives, Early Intervention Program therapists and teachers were in and out of the Nordins’ home from 7:30 a.m. to 3 p.m. most days, Erika said. At one point, Jack had 30 hours of therapy a week.

“One of the bigger things with Jack versus Chase … Chase kinda did talk on his own,” Christopher Nordin said. “Jack was nonverbal.”

Jack started preschool at the Developmental Disabilities Institute's Early Childhood Learning Center in Ronkonkoma on Sept. 5, 2017. The Nordins had enrolled Chase at the same center a year earlier after being referred by Early Intervention Program service providers.

The parents said they were happy with Chase’s success at the learning center, but still had concerns for Jack because he was nonverbal. According to the CDC, 1 in 59 children were identified with autism spectrum disorder in 2018 and about 40 percent of those children were nonverbal.

Developing social and communication skills can be among the greatest challenge for individuals with autism, even if they are able to say a few words early on. About one-quarter of children with autism can say a few words between 12 to 18 months, but then lose that capacity and become nonverbal. Others, like Jack, don’t start speaking until later in childhood.

“We didn’t know if he was ever going to talk,” Erika said. “That was my biggest fear. We just didn’t know."

When Jack started at the Early Childhood Learning Center, he could communicate with a bit of American Sign Language and verbal approximations — small sounds he made that corresponded to words such as "yes," "no," "mommy" and "daddy."

“We realized right away that, receptively, he was so intact and he was so smart,” said Krissy Ikonnikow, Jack's teacher at the center. “And we wanted to give him a means of communication.”

If Jack wanted cookies, he could point to a picture of cookies. When Ikonnikow asked him which song he wanted to sing during circle time in class, he could find an image for “Monkeys Jumping on the Bed.”

“He flew through PECS like it was nothing," she said.

Jack's verbal approximations began to be actual words, sometimes more than one at a time. He next started a program called Pro Lo Quo 2 Go, a tablet-based approach similar to the PECS book but on an iPad and complemented with audio. It has categories for home, meals, school and other needs, each identified with a corresponding image. When a user taps an image, the object's name is spoken, encouraging communication.

“All of a sudden, his speech just came,” Erika said.

At school, Jack carries the iPad — what Ikonnikow calls his "words" — and uses it to communicate with Ikonnikow and aides as needed.

“Sometimes he pushes the device away and says, ‘I don’t need that. I can talk now,' " Ikonnikow said.

One day at school, the curious and observant boy circled the building with Ikonnikow and asked every person he saw what color their eyes were.

But he still has challenges, his parents said. He doesn’t like cameras or big crowds, and loud noises can bother him. He’s learning how to handle these things, though.

“We had a party at our house on Saturday with some friends,” Erika said in a recent interview. “There were kids there and he goes ‘Mommy, I need my headphones.’ So, he knows if it’s too loud, he needs to put them on.”

For Jack, identifying his struggles and working to address them early has made all the difference, especially with the help of the Early Intervention Program and the nonprofit Developmental Disabilities Institute.

Across Long Island, DDI serves about 1,300 people ages 2 to 18, providing educational and vocational services for those with autism and other developmental disabilities at no cost to families. It also has support services for family members. There are three Early Childhood Learning Centers for kids ages 2 to 5 — the Ronkonkoma center the Nordins' children have attended, and centers in Huntington and Medford. Together, the centers serve more than 600 children.

To be eligible for services, children must be 3 or younger and have a confirmed disability or developmental delay. Under the state Early Intervention Program, parents can contact their county health department to have their child evaluated at no cost.

Erika and Christopher meet with Jack's teachers regularly for "parent training," where they discuss what and how Jack is being taught so they can implement the same methods at home.

After Chase had success at DDI, Erika and Christopher knew they liked the setup of the school and the student-to-teacher ratio.

Each classroom has smaller rooms within it that serve as a safe space if a child needs to spend some time away from classmates with an aide. There are six students to each teacher and 3.5 teacher aides, with one of four aides working a half-day.

They also liked that the school uses Applied Behavioral Analysis, or ABA, therapy, the same technique used by New York’s Early Intervention Program services. According to the autism advocacy organization Autism Speaks, ABA is a therapy designed to increase helpful behaviors and decrease harmful ones and is based on the science of learning and behavior.

DDI officials said 88 percent of their students are enrolled in their home school district by kindergarten.

Jack and his older brother followed that successful trajectory. Chase was in kindergarten in the Smithtown district this past school year. Jack is set to graduate from the Early Childhood Learning Center on Aug. 9 and start kindergarten on Sept. 4.

Looking ahead, the parents are cautiously optimistic about Jack's next educational move. He doesn’t handle change well, they said, and he likes to know his routine. Still, they expressed confidence that his time at the learning center has given him the skills he needs to be successful.

“As soon as you know or can sense that something's not right, get your child checked out,” Christopher said. “The earlier start, it just prepares them better for their future.”

Signs of need for early intervention

Congress enacted the national Early Intervention Program in 1986 under the Individuals with Disabilities Education Act. The program requires every state to make services available to families who have children with developmental delays and disabilities.

In New York, the Early Intervention Program is funded by the state and county health departments and is available to children ages 3 and younger. In Nassau and Suffolk counties, services come at no cost to families.

Parents should be familiar with standard developmental milestones and reach out to their local Early Intervention Program if they think their child may need to be evaluated.

According to the national Centers for Disease Control and Prevention, common signs of autism spectrum disorder in young children include:

Once deemed eligible by a county-approved evaluator, children can qualify for a number of services and therapies based on their needs, including but not limited to:

More information on child development, autism spectrum disorder and early intervention can be found at cdc.gov and by searching for the Early Intervention Program at the state Department of Health's website at health.ny.gov.