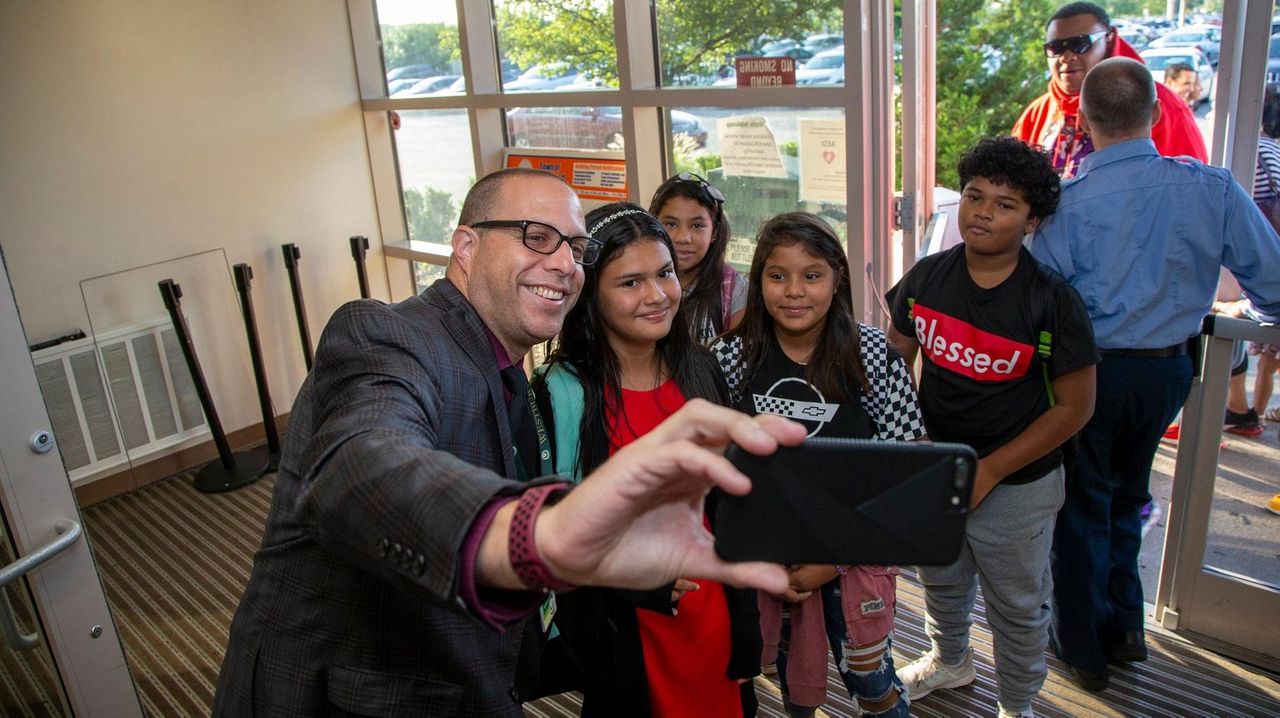 Eudes Budhai, Westbury school district superintendent, welcomed around 390 sixth-graders to a leased annex at Nassau Community College in Garden City on Tuesday. The purpose is to relieve crowding at the middle school until construction is completed. Credit: Howard Schnapp

An additional 280,000 students in Nassau and Suffolk counties will start classes either Wednesday or Thursday. Private and parochial schools also open this week, with many under the jurisdiction of the Diocese of Rockville Centre's Department of Education starting either Tuesday or Wednesday.

Across most of the Island's 124 districts, enrollment is declining slowly but steadily — a trend expected to continue for at least another three years, according to demographic experts at Western Suffolk BOCES.

There are local exceptions, however. The Westbury district has experienced robust growth, including an inflow of new arrivals from El Salvador, and classroom additions are under construction at both the high school and middle school.

About 390 sixth-graders from the district are being assigned to a leased annex at Nassau Community College in Garden City. The purpose is to relieve crowding at the middle school until construction is completed.

Outside the annex, a volunteer disc jockey played “Celebration”  through loudspeakers during Tuesday’s first day of classes.

“There’s the music — it makes you feel groovy!” said sixth-grader Ahmari Samuels, 11, who was accompanied by his mother.

The district’s superintendent, Eudes Budhai, who helped welcome sixth-graders to the annex, said accommodations had been made to make the building as much like a regular school as possible. A cafeteria has been installed, physical-education classes will be held nearby in a college athletic facility,  and every student is being issued a laptop computer.

"I hope you're as excited as we are to be in this nice new building," Edmund-Henry told 19 students who attended one class period. "At night, college students come here to study, so you're very lucky."

At Park Avenue Elementary School in Amityville, parents dropped off their children Tuesday morning, with students entering with new backpacks and clutching bags of school supplies. New this year for the school will be lessons in cursive writing. Educators said studies have shown that learning script helps with language development and other skills.

According to the state Education Department, the decision to teach cursive handwriting is a local school district decision.

Parent Marlon Green, whose son Nico Annuziato-Green is in the fourth grade, believes it's a good idea.

“It’s an excellent thing they need to know how to write in script,” he said, especially when they are older and must write their signature.

Fourth-grader Leann McQueen, 8, said she is looking forward to learning cursive writing. “I know it a little,” she said, “but I feel like it is good for when you are older.”

Patricia N. Eckardt, an assistant professor of education at Molloy College and co-founder of Peconic Community School, said when students work on handwriting — whether print or cursive — it helps with study skills and memory retention.

“When students are composing handwritten notes, it causes them to synthesize and organize content in their minds before actually writing the material," she said. "This is in contrast to typing notes, which often results in mere transcription.”

Amityville Superintendent Mary Kelly said the district stopped teaching cursive a few years ago during implementation of the Common Core learning standards. However, a curriculum advisory committee recommended that the district reinstate it. Third-graders started lessons last year when they were students at Northwest School and will continue this year at Park Avenue, which serves grades four through six.

“Teachers find it to be another learning experience that students can participate in,” Kelly said.

Another priority for several systems this school year will be early childhood education. Only an estimated 10 percent of 4-year-olds on the Island have access to full-day, state-funded prekindergarten programs, according to a recent estimate by regional experts. By contrast, New York City offers access to a full-day funded program for 4-year-olds.

However, such services are increasing across the region in response to parental demand, school officials said.

"Most folks are working and need a place for kids to be, and they're also looking to get their kids ahead," said Joseph Giani, superintendent of South Country schools.

South Country this year is expanding its existing full-day preschool program to accommodate up to 74 children, compared with 20 last year. This will bring the system's preschool enrollment to 164 children, attending either full- or half-day classes provided either by the district itself or by private contractors.

The hub of the expanded program is the newly refurbished South Haven Early Childhood Center on Montauk Highway in Brookhaven, formerly a vacant school that now will house 126 preschoolers. The center opened for visitors Tuesday, and the preschoolers will start classes Wednesday along with other students.

Giani added that districts have to be flexible in meeting individual family needs.

"Communities are different — some want a full day and others want half-day," Giani said. "I don't know if you'll see full-day everywhere on the Island. Some folks just don't want to see their little ones away from home the entire school day."

The West Islip district, meanwhile, is launching a new preschool program for 114 students, who will attend sessions 2½ hours a day, five days a week.

Bernadette Burns, the superintendent there, said an eventual expansion to full-day sessions is "on our radar going forward."

Like other preschool programs, West Islip's is for children who will reach age 4 no later than Dec. 1. Each of the district's four elementary schools will have a morning and afternoon class.

"We're so excited," Burns said, adding that the district was able to provide preschool placement for children whose parents requested it. Some other districts have relied on lottery systems for placement, due to limited capacity.

At state and regional levels, the school year kicks off with a list of volatile issues still waiting to be resolved. Those issues include state graduation and testing standards, teacher job evaluations and oversight of private schools.

"This is going to be a very pivotal year," said Roger Tilles, of Manhasset, a philanthropist and former real estate developer who represents Nassau and Suffolk counties on the state's Board of Regents.

The Regents are a 17-member board, elected by the State Legislature, which sets much of New York's academic policy.

One major question to be settled, Tilles said, is the future of state tests in grades three through eight, which have raised objections from many of the region's parents and teachers. In April, 45 percent of the region's students refused to take the state's English Language Arts test in the fifth consecutive year of boycotts.

When does school start in your district?Long Island public school students will start the 2019-20 school year on one of three different days in September. Students lead sustainability efforts at LI schoolsEnvironmentalists expect the momentum to continue after students played roles in Nassau's Styrofoam ban and Suffolk's ban on plastic bags.