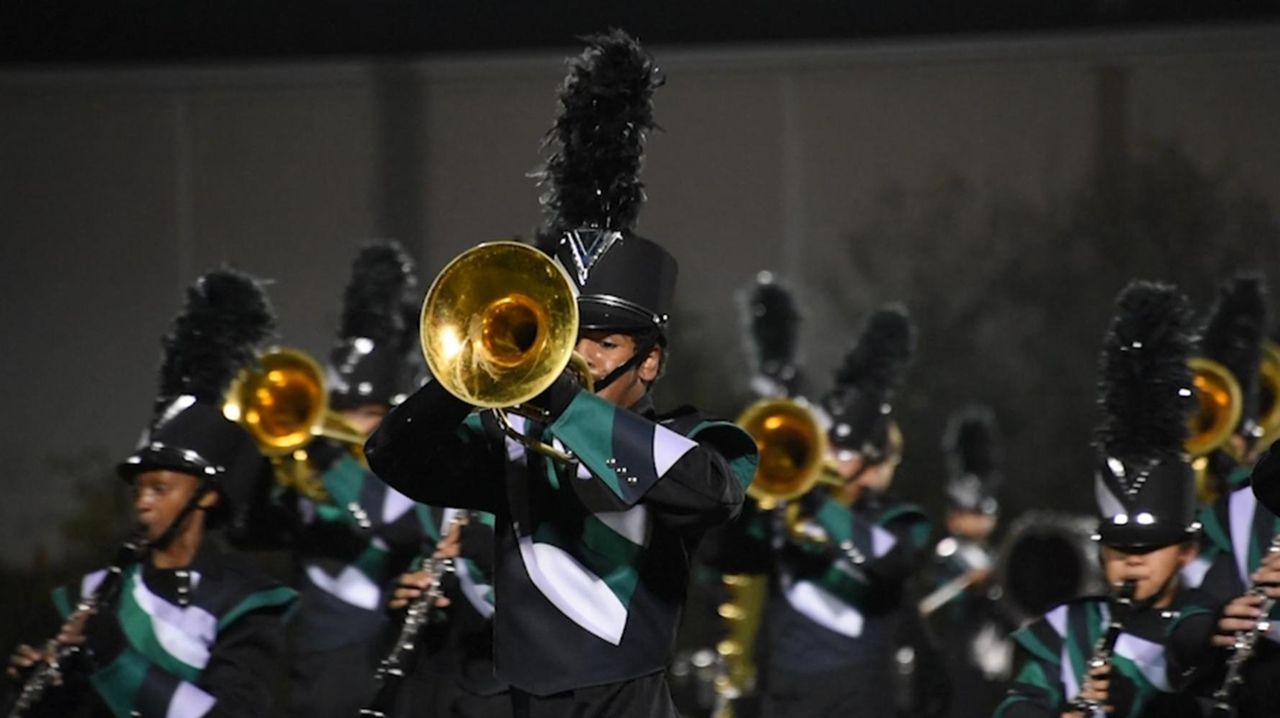 Brentwood High School’s Green Machine has long been a top marching band in New York — a Long Island powerhouse with three state championships in the past 11 years and 20-plus local titles since its inception more than four decades ago.

But organizers, students and parents say the influence of the 160-member band, which competes Sunday at the state championships in Syracuse, goes beyond that.

It also serves as an inspiration and a unifying force in a community that has been marked by violence and tragedy, with the deaths last fall of Brentwood students Kayla Cuevas, 16, and Nisa Mickens, 15 — slayings that are among those law enforcement officials have attributed to violence by the MS-13 gang.

“When you watch the news and you hear things . . . a lot of people are going to think negative things, but of course there is always the good and music is such an inspiration,” said Giovhan Dejoie, 17, a senior who is head drum major. “It brings everyone together — that is what music does and that is what the Green Machine represents.”

The Brentwood band is among 10 from Long Island schools scheduled to compete Sunday at the Carrier Dome at Syracuse University in the New York State Field Band Conference Championships — the largest contest of its kind in the state, drawing 50 bands with thousands of performers. The band won the championship in its class in 2006, 2007 and 2010.

Since its last state title, the Green Machine in 2013 moved to the state conference’s national class based upon prior years’ scores — the only Long Island band included in the category. This weekend, the band will compete against seven others, all from upstate schools. Last year, it placed seventh out of eight.

Joe Sitler, 46, a 1989 Brentwood graduate who played baritone horn in the band, has been its director since 2009. He said the band members and their families want to show just how good Brentwood can be.

The gang violence has put the community in the national spotlight, drawing the attention of President Donald Trump and Attorney General Jeff Sessions. Authorities have linked 11 killings in Brentwood and Central Islip in the past 13 months to the notorious MS-13 gang. That includes the deaths of Cuevas and Mickens.

Recently, Sitler was getting his hair cut and told the stylist where he works.

Sitler said no one in the marching band had a direct connection to Cuevas or Mickens. The band played at a memorial service at the high school for the slain students.

“Last year was rough,” Sitler said. “It took a toll on the kids even though they weren’t directly impacted, but it took a toll.”

Other bands have shown support for Brentwood. Sachem High School’s marching band, the Arrows, wore ribbons with Brentwood’s school colors of green and white to the two high schools’ competition last year. This year, Brentwood’s band returned the gesture, wearing Sachem’s colors in honor of football player Joshua Mileto, 16, a junior who died in August after a log fell on him during a football training drill.

“The Green Machine is one huge family,” said Angela M. Mercado, president of the marching band parents’ association. “It epitomizes everything that is good in Brentwood.”

The Brentwood district, with more than 18,000 students, is the largest on the Island. The high school’s marching band is open to all, with the requirement that they enroll in a music class. No one who wants to work hard is cut, and any student can participate in the color guard.

“Every time I perform and every time we play, I want to smile, I feel really honored,” said Emerese Noel, 15, a sophomore and a drum major.

Friday afternoon, the band will perform for the community on the field outside the high school. On Saturday morning, they leave for Syracuse aboard four coach buses. Their time to compete Sunday is set for 8:44 p.m.

“Before this, I was never really all about Brentwood,” said drum major Hunter Akins, 15, who is in the 10th grade. “But after going to these competitions and representing Brentwood, it is just like something rose inside of you. I want to represent Brentwood and I want to be strong for Brentwood.”