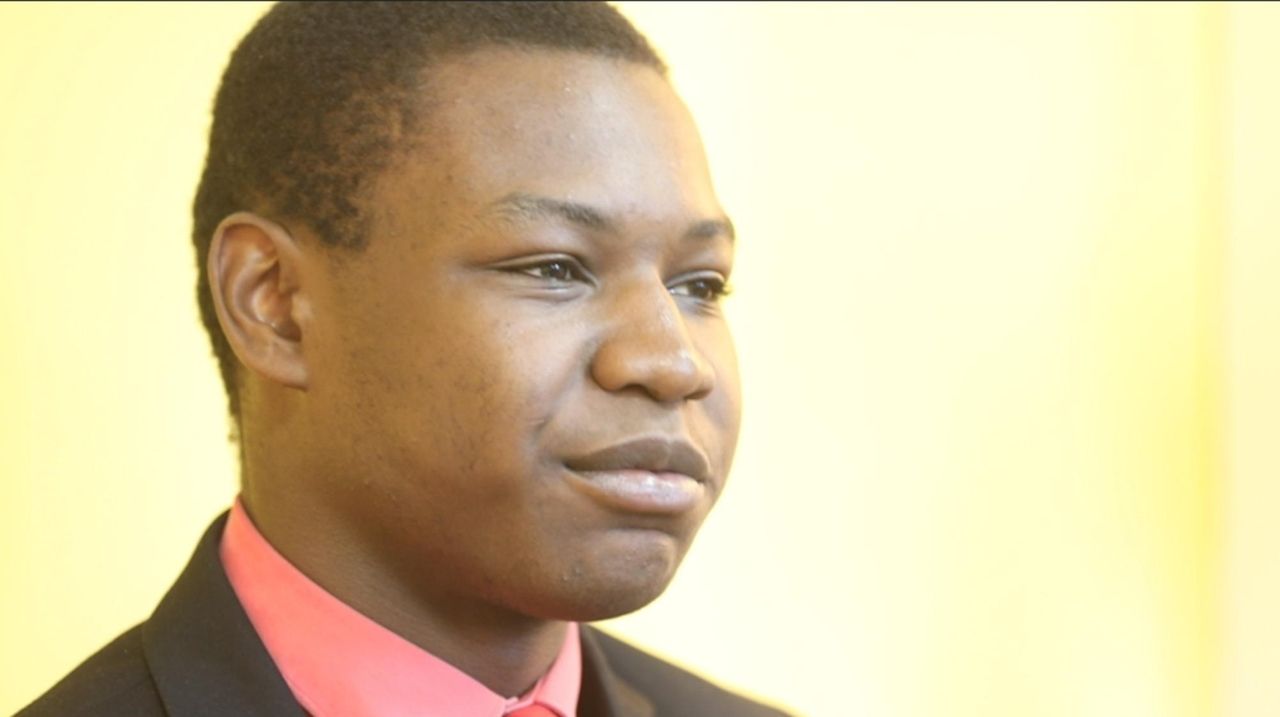 Chaminade High School senior Jude Okonkwo was accepted into all eight Ivy League schools. Okonkwo, 17, of Dix Hills, has his pick of  Brown University, Columbia University, Cornell University, Dartmouth College, Harvard University, Princeton University, the University of Pennsylvania and Yale University, He  must decide where to enroll by May 1, 2017. On April 7,  he says he's leaning toward Harvard. Credit: Newsday / Raychel Brightman

“I’m so grateful that, after all of the work I’ve put in, I’m able to reap the benefits as well — and that all those who have helped and watched me see that hard work has truly paid off,” said Okonkwo, who hopes to set a good example for his four younger siblings.

While hitting the Ivy jackpot is rare for even top academic performers, Okonkwo isn’t the first Long Island student to do so. Elmont Memorial High School graduates Augusta Uwamanzu-Nna (Class of 2016) and Harold Ekeh (Class of 2015) were accepted to all eight. In 2014, Kwasi Enin of William Floyd High School did the same. Uwamanzu-Nna went to Harvard; Ekeh and Enin to Yale.

Okonkwo, the son of physicians, aspires to be a neurosurgeon and looked for schools with strong science and medical programs, including those with a combined bachelor’s degree and medical school acceptance. His unweighted grade-point average is 98.9.

He is leaning toward Harvard but received a full scholarship to Wayne State and generous financial aid packages from the other schools, he said, which will factor into his decision.

“It was more of an ‘Oh, shucks’ moment than a boastful moment when he got accepted. He’s a very unassuming person — you almost had to pry the fact that he got into all eight Ivies out of him,” said Daniel Petruccio, assistance principal of guidance. Petruccio said this is the first time a Chaminade student has swept the Ivy acceptances since he started working at the school in 1999.

During the application process, Petruccio said, many Chaminade faculty and staff members learned about the Okonkwo family’s remarkable story.

Okonkwo’s parents, Ndubueze and Chinwe, emigrated from Nigeria in the 1990s and settled in New Orleans. They lived in a two-story home in Harvey, in Jefferson Parish, on the west bank of the Mississippi River. In 2005, when Jude Okonkwo was 7, Hurricane Katrina forced them to evacuate.

Okonkwo began second grade on Long Island and remembers the experience well, he said, detailing it in one of two essays he wrote as part of his college applications.

The 6-foot-2-inch teenager runs track and is president of the Glee Club, a member of the school’s global chamber ensemble, editor-in-chief of the literary magazine and news editor of the school newspaper. He also has a self-published book of poetry.

“A lot of times, people forget that medicine and healing is a process and it’s about the human experience,” he said. “That’s why I like literature, and I think that’s some of the insight I would bring to medicine.”

Outside of school, Okonkwo plays the piano and clarinet and has been a member of the children’s choir at St. Matthew Roman Catholic Church in Dix Hills for a decade. From time to time, he is pulled into a pickup game of basketball.

For the last two summers, Okonkwo worked as a lifeguard at the Town of Huntington pool. His interactions with people in his community, along with his love of humanities, confirmed his desire to pursue health care, he said.

“We cannot wait to see the incredible things Jude will continue to do with his life,” he added.