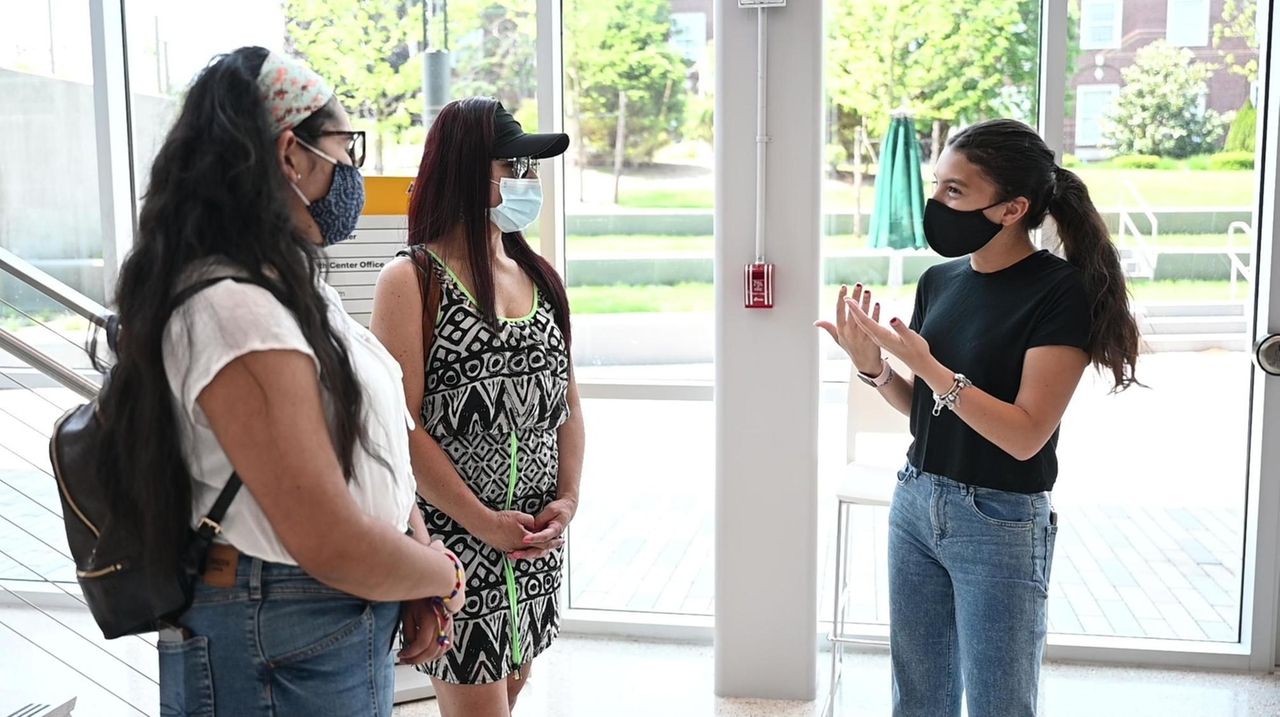 Long Island’s colleges and universities — like schools across the country — say their freshmen classes this fall will be more diverse, with more students who are first in their families to attend college.

The picture is more strained for high school seniors frustrated by denials or wait-lists at highly selective schools across the nation, where in past years they might have expected acceptances, guidance counselors said. Applications to those schools surged after SATs were made optional during the coronavirus pandemic.

"We saw a huge trend in students being wait-listed at schools where according to our data from the last three to five years, they would have gotten in," said Linda Bergson, chair of the Ward Melville High School guidance department in the Three Village Central School District in East Setauket. "They were frustrated, upset and disappointed."

Applications soared at some of the top-tier schools nationally, which has frustrated some Long Island seniors and their guidance counselors.

Long Island colleges and universities are optimistic their enrollment goals will be met for the fall semester.

Administrators at Island colleges and universities say diversity is increasing in applications, along with acceptances.

Applications at selective schools were up sharply by double or triple digits, percentagewise. At Massachusetts Institute of Technology, applications rose 66%, 41.6% at Harvard University, 35% at Boston College and 102% at Colgate University, according to published figures. With applications for limited spots higher, acceptance rates continued to fall. At New York University, for example, the acceptance rate is now 12.8% of applicants, compared to 35% in 2013.

Overall, the Common Application, which funnels applications to more than 900 colleges and universities, reported an overall increase of 11% in the number of applications.

"This year was definitely the most competitive year for college admissions, I’d have to say," Lynbrook High School guidance counselor Jonathan Spector said. "We’re all still frustrated. It was a tough year."

Spector, who has been a guidance counselor for about two decades, said fewer students this year were accepted at their top choice school than in past years. "When I saw the percentages of increases [in applications] this year, it made sense, but I was very surprised they didn’t get in," he said.

While highly selective schools and large state school systems are thriving, less clear is the prospect for less selective and regional schools, many of which saw declining enrollment last year.

Colleges and universities on Long Island expressed optimism, although final enrollment figures — the number of admitted students who confirm their acceptance and enroll — are not yet set.

"To tell you the truth we’re actually very pleased: Our applications, admissions and deposits are up this year. Our deposits are up to a ridiculous level," said Joseph Posillico, New York Institute of Technology’s vice president for enrollment management. "Last year was a very challenging year for schools, like no other year we’ve ever experienced."

Stony Brook up 5.07% in applications

David Bousquet, Stony Brook University’s interim vice president for enrollment management, said applications were up 5.07% this year, from 36,891 to 38,763, for a targeted freshmen class size of 3,700. Many applicants were from Long Island and New York City, as well as out of state, with continued declines in international, especially Chinese, applicants.

He attributed the increase to the move to optional SATs. "We were reading applications holistically, putting more emphasis on the three-year trend in grades and giving more emphasis to academic rigor, leadership extracurricular and nonacademic pursuits, community work, jobs and care of family members," he said, noting that more Black and Hispanic students had applied and offers of admission "increased significantly to both groups."

As with colleges nationally, local institutions said they saw more minority applicants apply and win acceptance, even though some trends nationally have raised alarms that poorer or diverse students were lagging in completing financial aid applications.

"We’re seeing more diverse people have applied, and we’re accepting more diverse people, and they are qualified and prepared for our academic programs," said Jeffrey Levine, director of admissions and enrollment planning at Farmingdale State College. "For this fall so far, 65 percent of applicants identify as Black or Hispanic. That’s much higher than in previous years."

In fall 2019, those who showed up on the first day at Farmingdale were 10.09% Black and 25.1% Hispanic, he said, noting that last year, more than a third of admitted applicants enrolled as freshmen.

At Molloy College in Rockville Centre, Marguerite Lane, vice president for admissions, said the college was hopeful its enrollment would rebound to 2019 levels this fall after a pandemic dip last year. "We’re optimistic this year because students are excited to get back to a more normal college experience," she said.

Applications are up 4% over last year and 2% over 2019 at Hofstra University in Hempstead, "which is certainly a positive sign," said Jessica Eads, vice president for enrollment management. "We attribute a lot of that to the launch of our new undergraduate nursing program," which attracted 1,500 applications for 40 spots.

Adelphi University in Garden City also saw a 4% increase — after a 5% decline last year — and received a record of nearly 15,600 applications, said Kristen Capezza, vice president of enrollment management. It expects its 70% acceptance rate to yield the desired freshmen class size of 1,200 incoming students in the fall, she said. Nearly half the student body identifies as nonwhite, she said, with those identifying as Hispanic, of two races and first generation showing significant growth over the last three years.

At the New York Institute of Technology, Karen Vahey, dean of Admissions and Financial Aid, said the absence of required SAT or ACT scores benefited diverse applicants, as scholarships are now based on grade-point averages rather than test scores. "They are getting rewarded for performing well over four years in high school rather than just on a single test and that is a huge access and equity issue," Vahey said.

Gigi Lamens, vice president for enrollment management at St. Joseph’s College in Patchogue, said the college "put a great deal of emphasis" on reaching out to first-generation students to assist them in the application process. This year, 43% of the admitted students are first generation, up from 37% two years ago.

And as the Hispanic population on Long Island has grown, so has their presence at St. Joseph’s: from 9% of the freshman class in 2013 to 17% last year. "We watch very carefully the demographics on the Island," Lamens said.

However, not all local schools expect a full rebound from the pandemic: SUNY Old Westbury said applications were down and anticipated a 4% drop in fall enrollment.

Community colleges in Nassau and Suffolk counties could continue to see enrollment declines, but even there, some signs were positive. While fall 2021 applications to date were down 5% over last year at Suffolk County Community College, it saw a 5% hike in transfer students, and its strong summer semester enrollment "is trending to be among its best in 10 years," spokesman Drew Biondo said.

Some Long Island high school counselors, including those at Sacred Heart Academy in Hempstead and Wantagh High School, said their college application and acceptance rates were essentially unchanged.

Wantagh guidance counselor Frank Muzio said the virtual application process forced students to take more control "over their own destinies," adding, "I look for the silver lining in this tragedy, and I find it in the manner in which we all adapted and grew from the experience."

But at Hempstead High School, where many families suffered from the COVID-19 pandemic, the impacts were pronounced, college counselor Nathalie Placide-Riboul said. Although some will attend schools such as Georgetown University, NYU and Penn State University, most graduates are staying local, she said. And nearly half — 185 out of 396 graduating seniors — opted to apply only to Nassau Community College.

Scholarship money still wasn’t back to normal, she said, and students wanted to save money. She said that while counselors pushed students to take SATs, come to virtual college recruitment events, apply to schools and stay engaged, the pandemic took a toll on them, she said.

"A lot of the parents are deceased, a good amount were sick from COVID, and they wanted to stay home," Placide-Riboul said.

Meet 145 of LI's 2021 valedictoriansGet to know more than 100 of the top seniors from high schools across LI. See who had a 120 GPA, who worked with penguins and who's going abroad. Meet 129 of LI's 2021 salutatoriansThey're filmmakers, black belt martial artists, and more. Meet Long Island's high school salutatorians.