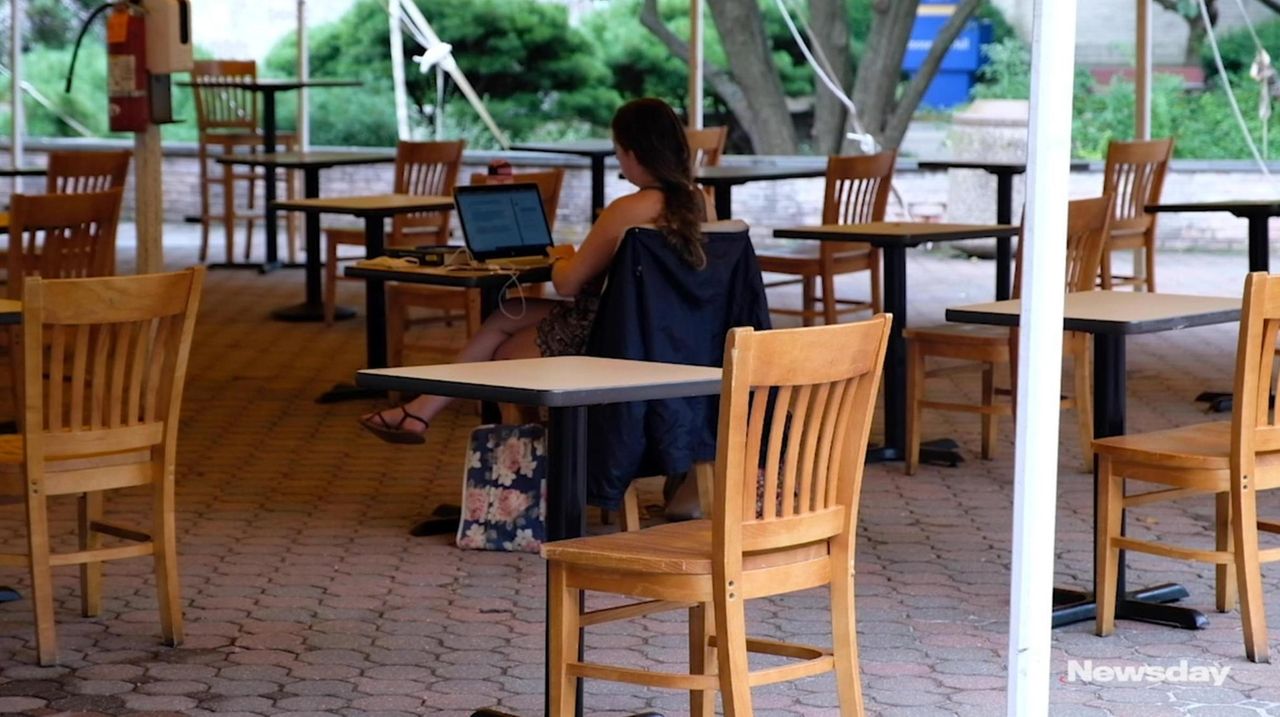 Hofstra University Provost Herman Berliner says the school has lost millions of dollars because of the coronavirus pandemic, but the school continues to invest more money to keep faculty and students safe. Credit: Jeff Bachner

One of the SUNY system’s foremost research institutions, Stony Brook University, will freeze hiring, cut salaries and budgets, and take more than 50% from its $80 million reserve fund this next academic year to offset mounting costs from the coronavirus pandemic, the school's president said in a letter last week.

All of Long Island’s colleges and universities are grappling with revenue losses and playing on their strengths to survive the challenges of COVID-19, their leaders say, as they prepare to reopen campuses with a mix of in-person, remote and hybrid courses.

“The bottom line: We know we have at least a $109.6 million deficit this year on the academic and research side, and it could become significantly worse, depending on the future impact of COVID-19 in our state and on our campus,” Stony Brook president Maurie McInnis said in a letter to faculty and staff. “The economic havoc COVID has left in its wake will be significant and long-lasting, and it is impacting Stony Brook’s financial health in multiple ways.”

Long Island schools refunded millions of dollars to students for room and board cut short when campuses shifted to remote instruction in March. Now, lowered density in dorms this fall will further impact revenue at schools that typically have many residential students.

Anticipated dips in enrollment, especially in international students, also will affect tuition income, while federal aid will cover only a portion of the costs of upgraded technology for remote instruction, upgraded ventilation and other measures to dampen the spread of the coronavirus, school administrators say.

To defray costs, schools have left positions unfilled, cut expenses such as nonessential travel, and in some cases furloughed employees.

Stony Brook, which had an enrollment of more than 26,000 in 2019-20, said it lost $34 million in refunded fees and $12 million in other income last spring, and spent $9.3 million in COVID-19-related costs. The school anticipates a 17.5% drop in out-of-state and international students for a $20 million reduction in revenue, McInnis wrote. And, based on registration information, it expects a decrease in the number of student residents on campus from a capacity of 10,000 to 6,000, for an estimated loss of $38.9 million.

As the financial prospects darken, several graduate students complained fall semester fee increases of about 18% are double what they had expected.

Jose Moscoso, 28, a PhD candidate in Ecology and Evolution and secretary of the Graduate Student Organization, said, "It's like them saying 'yikes we bled money' so now the poorest, lowest-paid employees on campus will have to carry this load. Why are we not seeing higher administrative pay cuts?"

McInnis said Stony Brook had used $13.4 million in federal support and achieved $18.7 million in savings from refinancing student housing loans. But costs continue to mount, including those at the university's hospital and clinic, which anticipate "an additional loss of between $60 [million]-$80 million in this fiscal year due to COVID," she wrote.

While some universities are freezing tuitions, Hofstra University will go forward with its 4% increase in the fall. The school paid $12 million in refunds to residential students last spring and will forgo $10 million in revenue by reducing dorm density from 3,000 to 2,300 students this fall, Provost Herman Berliner said. The school resisted calls by some students for further rebates last spring and defended the tuition hike for the fall, he said.

“I understand the students’ feelings — they don’t value remote instruction the same way they value in-person, but the cost structure here is exactly the same; actually the costs are higher," Berliner said. “It’s still Hofstra faculty teaching the courses, the same class size. We’re doing everything we can.”

At Adelphi University, where about a quarter of students live on the Garden City campus, dorm density will be reduced by 10% and students will go home after Thanksgiving, said Kristen Capezza, vice president of enrollment management. That will lead to the loss of millions in revenue on top of millions in added costs due to the pandemic, such as upgraded technology and ventilation systems, plexiglass barriers, and the costs of testing and cleaning, Capezza said.

Capezza noted that federal CARES Act aid will cover some but not all of the costs. In addition, she said, enrollment is anticipated to drop about 5%, from last year’s 7,991 students to about 7,600, including fewer new international students.

But the university has not had to dip into its endowment, she said, and is instead reducing operating expenses, nonessential travel and competitive travel sports.

“No games, no traveling,” she said. “It is challenging, but it forces us to be nimble and innovative, and we’ll emerge stronger and more efficient on the other side.”

Michael Kinane, spokesman for SUNY Old Westbury, said the decision to not allow on-campus living in the fall would lead to a $3 million loss. And while it appreciated federal aid through the CARES Act, it anticipated cuts in state aid.

Institutions with fewer residential students, like Molloy College, St. Joseph’s College and New York Institute of Technology, rely more on tuition income, and most said that while they anticipated dips in enrollment, they were hopeful those numbers would be manageable.

“Whatever president you talk to is anxious about what the fall census actually will be,” said Donald Boomgaarden, president of St. Joseph’s College, a largely nonresidential school, with campuses in Patchogue and Brooklyn, that relies on tuition for 89% of its income. “We have to see who shows up on campus … if numbers hold now, we should end up with a slight increase in revenue.”

But that doesn’t mean they haven’t felt any losses, spending millions on COVID-19 responses and in some cases freezing tuition and fees.

“Our costs have increased, not decreased in terms of managing our campus,” said James Lentini, the new president of Molloy College in Rockville Centre, which will forgo a 4% tuition hike at a loss of $4 million and a loss of a further $150,000 in fees.

The school was allocated $2.6 million in federal CARES Act aid, with half going to students and the rest paying for COVID-19 responses on campus like facial recognition kiosks to measure the temperature of those entering buildings. However, Lentini said, the aid “doesn’t help the bottom line at all, frankly … some of these things we couldn’t consider doing if we didn’t have CARES Act money. So it helps increase safety, but it can’t be used to plug budget holes created by loss of revenue in tuition, room and board, and our regular costs.”

At Farmingdale State College, an anticipated $10 million deficit, due in part to decreased housing revenue, could improve if enrollment holds up, school president John Nader said. But a cut of up to 25% in state aid could force it to draw down some of its reserves.

The extraordinary challenges could pay off as investments now in remote and online instruction expand opportunities later, he said.

“In the longer term, I believe it will make us a stronger institution,” allowing it to reach out to potential students who, because of work and family obligations, might thrive with online instruction, Nader said. “We had been moving into the online realm pretty steadily in the last few years. This may offer us an opportunity to become even better at that.”

Some schools are looking for potential advantages in the crisis. New York Institute of Technology, a primarily nonresidential career-oriented school with more than 4,000 students on its Old Westbury campus last year, is anticipating a drop in enrollment, especially in international students, said Elizabeth Sullivan Roseman, senior director for communications. But it has noted upticks in some of its programs and hopes it will attract Long Islanders who prefer to study closer to home.

“We certainly think it’s a good opportunity for us," she said.

Even tiny Webb Institute, which offers full scholarship tuition to its 100 students, has not escaped the impact of the pandemic. The four-year college offers a dual degree in naval architecture and marine engineering and is located in a former mansion on 26 acres in Glen Cove.

Although it has received government aid and loans, it anticipates a revenue loss between $200,000 and $500,000, and "expenses we don’t know yet … a net impact probably around $700,000," said school president R. Keith Michel, noting it amounted to about 10% of Webb's budget. "It's significant, but something we can weather."

He added, “If there are major outbreaks, and everyone has to send everyone home, there would be a major impact on room and board, so we just don’t know.”