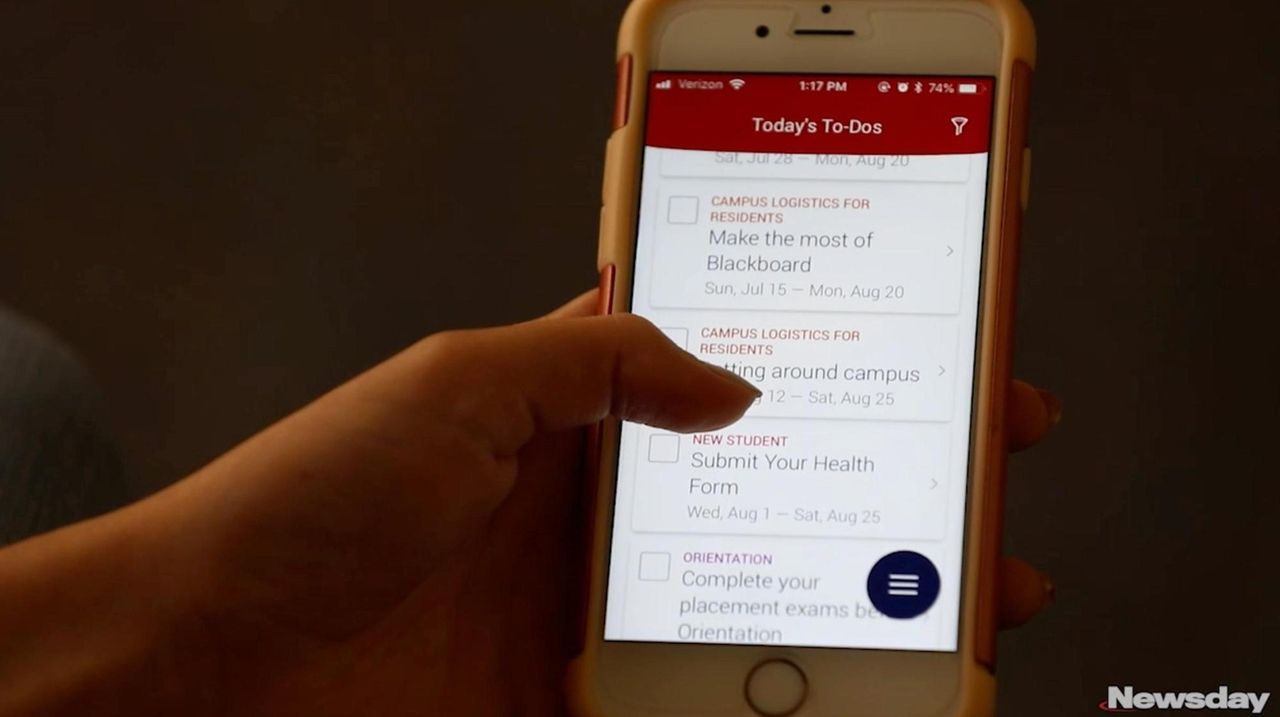 Want to check your college course schedule? Check the app. Looking for campus bus times? Check the app. Trying to find your school’s Harry Potter Alliance Chapter? Yes, there’s an app for that too.

Generation Z is pursuing higher education, and colleges and universities across Long Island are ready, welcoming more than 100,000 first-year students and undergraduates in coming days with smartphone apps, social media and staff ready to answer questions 24/7.

Adelphi University is counting down until the start of classes, on Instagram and Snapchat. Students at Nassau Community College can use software to build their class schedules.

During summer orientation sessions, incoming Stony Brook University students downloaded and scoped out the school’s app. And Suffolk County Community College has a bot ready to immediately answer questions asked on any platform.

“They’re an instant generation,” said Sunil Samuel, Hofstra University’s assistant vice president of admission. “We’re trying to cater much of what we do around that.”

Every year, the university, like others across the Island, studies the new student population “to understand who they are and what they need,” Samuel said.

Known as Gen Z, iGen or post-millennials, this group of students was born starting  in the mid-1990s and are digital natives.

From their academic to social to daily experiences, everything is “fundamentally different than the way that we’ve done things in the past,” said Matthew Mayhew, the William Ray and Marie Adamson Flesher professor in educational administration at The Ohio State University.

Gen Z is constantly connected to technology, Mayhew said. They also like to have as many choices as possible and want to individualize their education.

As this cohort began going to college during the past few years, institutions of higher education have sought innovative ways to recruit, educate and retain them.

"This generation lives on social media," Molloy College President Drew Bogner said. The Rockville Centre-based school is on a number of platforms, including Twitter, Instagram, Snapchat and LinkedIn. "If you want to reach them, you have to be there," he said.

A major difference between the millennial generation, born in the early '80s, and iGen is the smartphone, said Jean Twenge, professor of psychology at San Diego State University.

“Information is instantly accessible 24/7 on the computer that you keep in your pocket that we call a smartphone,” said Twenge, author of “iGen: Why Today's Super-Connected Kids Are Growing Up Less Rebellious, More Tolerant, Less Happy — and Completely Unprepared for Adulthood.”

The device — its universality now ubiquitous — has created a baseline that everything is going to be online and instant, Twenge said.

Colleges and universities across Long Island have pivoted to adapt, adding and building on software and phone apps so students can quickly access information that once was available only on paper.

They’ve also been working to ensure websites are compatible with mobile devices, and to use text messages to send information and alerts to students.

Headed into her third year at Stony Brook, Valerie Cheransky, 20, of Washington Heights in Manhattan, has downloaded all the apps the school has to offer.

If the English major needs to catch the bus on campus, she can use the SBU Smart Transit app, and if she wants to join a club, she looks for them on the Corq app.

Cheransky uses the Guide App, which launched last year, to make sure she’s on track toward graduation, get reminders to register, check her color-coded schedule and explore career options.

She uses the Blackboard app to find course information and communicate with professors.

“It definitely is a huge benefit, because I don’t have to open up my laptop or go to a computer to look at things,” Cheransky said. “It’s kind of a small, digitized version of everything I would need to know immediately between classes, which is really helpful to me.”

Faculty and staff also use the apps and software to identify and keep students on track to graduate, said Charles Robbins, Stony Brook vice provost for undergraduate education and dean of the undergraduate colleges.

“It just takes the pressure off the students in having to put a schedule together,” she said. Within the next year or so, the college plans to offer virtual orientations for students who can’t come in person.

Schools also are focusing on bulking up their online offerings and adding online components to classes.

Molloy College has been offering hybrid classes. "Many of our students are older students returning to class to complete a degree or traditional-age students who are juggling schoolwork with jobs. In both cases, they want the flexibility of online or hybrid classes," Bogner said.

Suffolk County Community College plans to launch more online tutoring and counseling, said Christopher Adams, the college’s vice president for student affairs. The college, like other schools, is working to have paperwork, such as applications, be completely online.

Hofstra plans to incorporate cameras into some classrooms of its new Frank G. Zarb School of Business, so that graduate students can access class through a video feed if they can’t make it in or are running late, Samuel said.

Cindy Zhao, 17, of Manhattan, an incoming freshman at Stony Brook, said alerts are extremely helpful. “You don’t really check the app if it’s not on your mind, but then if something pops up, I think you’re more likely to click on it,” she said.

In an age when students are inundated by information, colleges have to calculate how much information to send out, and when.

Students respond best to information being sent out in short, digestible bursts of information, Samuel said.

Because Gen Z is used to having information immediately available, colleges and universities also have had to adapt their response times.

“We’re trying to be as flexible as possible in terms of being present for our students, understanding that they are changing and that means that we have to also,” Fox said.

SCCC noticed an increase in students reaching out on social media, and in response now has a bot that can send answers immediately or connect students with someone who can, officials said.

“We have to just constantly be meeting them where they are and we have to be very much relevant to them,” said Kristen Capezza, Adelphi’s associate vice president of enrollment management.

Adelphi uses digital ads and email but also has a strong social-media presence, using Snapchat, Instagram and other platforms. In addition, the university has a team that manages digital advertising to help target advertisements toward students who have visited the school's website or engaged in some way, she said.

SCCC uses geofencing — GPS technology that creates a virtual boundary and digitally advertises to individuals within that location, officials said.

"We no longer have to commit dollars and then live with it, no matter what; the flexibility to move amongst the platforms in a matter of hours or minutes makes the advertising dollars work more efficiently for the college, and reaches the students and prospective students right where they spend so many hours each day," she said.

It can be challenging because students' online usage and preferences evolve so quickly, Capezza said. Gen Z, for example, doesn’t use Facebook as much, but Adelphi is able to reach their parents on that platform, she said.

Gabriella Leon, 16, a rising senior at Dobbs Ferry High School, is following Adelphi’s Instagram, Snapchat and Twitter account to get a better sense of what's going on at the university as she considers where to apply in coming months.

“I could see everything that they post, all the cool things that they’re doing,” Leon said.

She started her search for a nursing program using Google and has been narrowing down her options from there. She emailed Adelphi and visited the campus in July.

Making sure she went to the Garden City campus was important, she said. “I’m a visual person. I have to see where I’m going.”

These young people, known as Gen Z, iGen or post-millennials, were born starting in the mid-1990s. Generational lines are blurry, experts noted, and not all fall into these overarching characterizations.