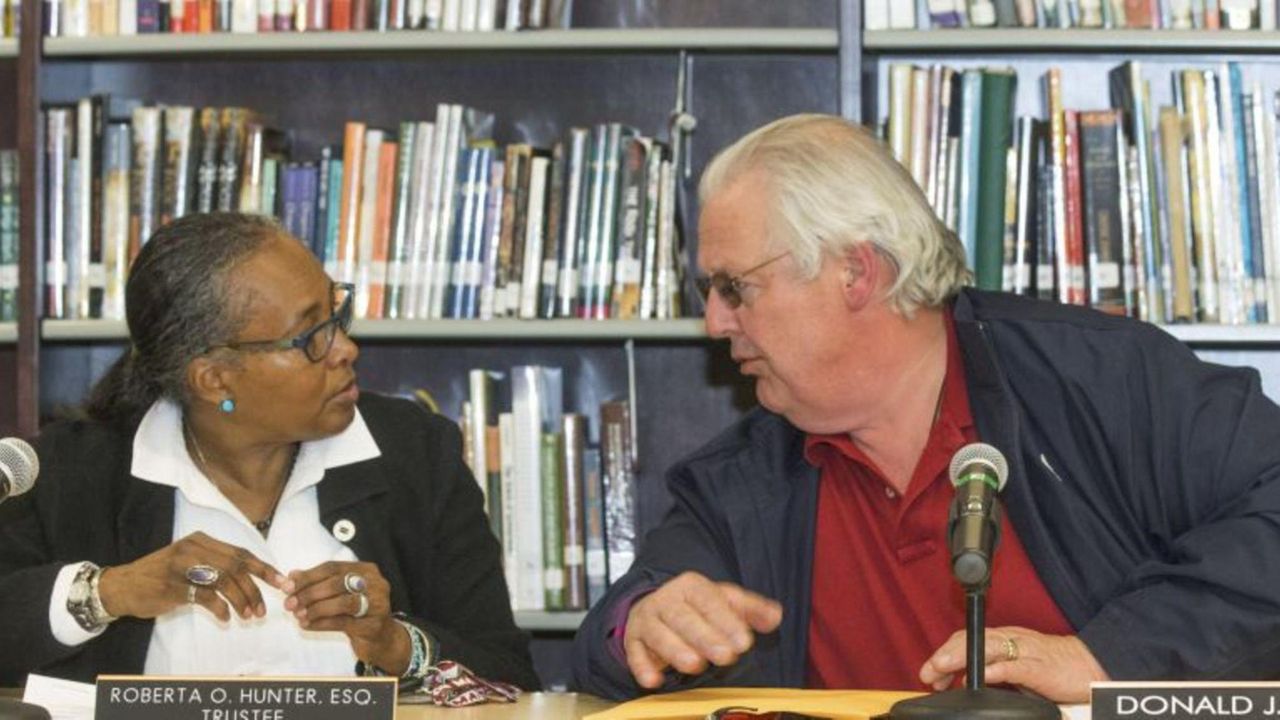 At a Southampton School District board meeting Tuesday, members of the Shinnecock Indian Nation faced off against pro-Columbus advocates who sought to reverse a district decision to rename the Columbus Day holiday on its calendar. Credit: Newsday / Mark Harrington

The debate over Columbus Day erupted anew at a Southampton school district board meeting as members of the Shinnecock Indian Nation faced off against pro-Columbus advocates from across Long Island who sought to reverse a district decision to rename the holiday on its calendar.

In the end, the school board in a split vote decided Tuesday night to maintain the designation of Oct. 14 as “Indigenous Peoples Day/Italian Heritage Day,” after a fierce public comment session in which explorer Christopher Columbus was alternately likened to Hitler and defended as “a giant.”

About a dozen Shinnecock Indian tribe members attended the meeting, including former trustee Nichol Dennis-Banks, with signs urging the board to “abolish Columbus Day.” They pointed to atrocities the Columbus expeditions have historically been associated with in arguing the holiday has no place on a school calendar.

“To sit there and celebrate a man who has raped, murdered and stole is a slap in the face,” Dennis-Banks said.

But in pleading with the board to return Columbus Day to the calendar, Lou Gallo, a member of the Sons of Italy from Miller Place, waved two books that he said proved Columbus wasn’t responsible for historical atrocities.

“These people prove that the revisionists and the detractors basically resorted to gross exaggeration, misinformation, disinformation, faulty interpretations, faulty translations, textural corruptions and non sequiturs, all to malign this man as a brutal and sadistic invader,” said Gallo, one of about a dozen pro-Columbus advocates at the meeting. “It’s totally, abjectly untrue. Please keep Columbus Day on the calendar.”

Several board members expressed discomfort with the idea of altering what remains a national holiday, and voted for the alternative of removing all name designations from the calendar and noting instead simply days with no school.

But supporters of Indigenous Peoples Day/Italian Heritage Day prevailed, including board member Roberta Hunter, a Shinnecock tribal member who argued strenuously to remove the Columbus designation.

“The motion is carried,” said board president Donald King. “It is heart-wrenching to see our board struggle like this.”

Excelsior Pass a hot ticket — if you can get one from the state
1:53
Cops: CVS worker stole vaccine cards from Levittown store
1:37
Witness: Couple agreed to talk to police after Thomas Valva's death
COVID-19 vaccinations for kids ages 12 to 15 begin on LI
Gyrodyne building plan opponents want commissioner to resign
Pioneering Ch. 5 anchor, Bill McCreary dies at 87
Didn’t find what you were looking for?