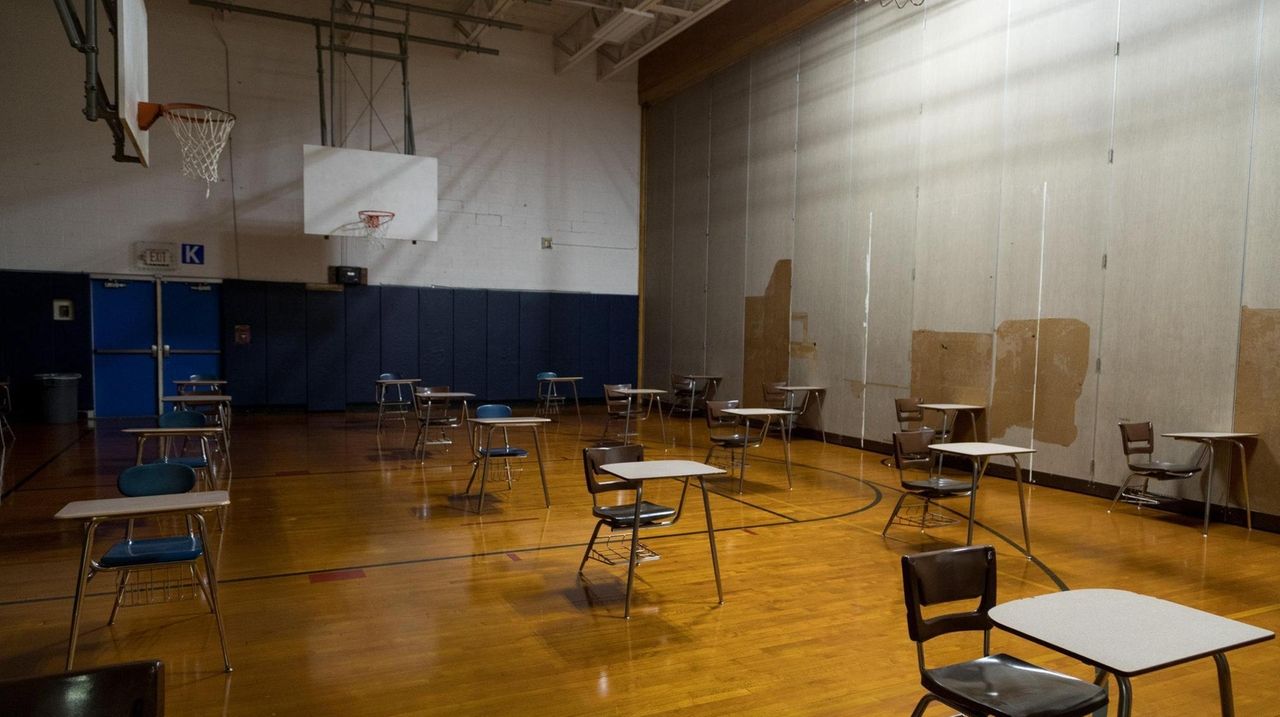 Newsday explores what the first days of school will look like for students on Long Island. Credit: Barry Sloan

With few resources, less time and no precedent to draw on, Long Island educators have scrambled to redesign facilities to protect students, teachers, clerks and custodians against a virus that has killed more than 180,000 people in the United States.

Classrooms emptied of half their furniture, gyms and cafeterias converted into learning spaces and social distancing reminders affixed to floors, desks and lockers are all part of the redesign efforts in the Baldwin and Commack school districts, which welcome students back within the next two weeks.

Newsday toured schools in both districts Tuesday. Baldwin's first day back is Sept. 8; Commack's is Sept. 14.

To prevent the virus from spreading, district leaders were forced to rethink the design and use of virtually every space inside their schools. How effective this effort will be remains to be seen, educators acknowledged, and students could see more changes to their classrooms as the pandemic wears on.

“This year will be a year where we’re constantly reassessing,” Baldwin Superintendent Shari Camhi said. She stood in a hallway in Baldwin High School, speaking from behind a surgical mask and over the hum of a worker spraying disinfectant nearby.

“We’re calling it the year of flexibility,” she said. “As we see how things go, we’ll adjust as needed.”

With the virus preparation adding millions of dollars in expenses to their budgets, neither district hired an architect or interior designer for major building overhauls this summer. Instead, district officials worked to turn school reopening guidelines from government health and education agencies into new floor plans and circulation schemes.

Whereas classrooms in the districts are usually laid out to encourage collaboration among students, keeping them apart became the central design principle this year.

In Rolling Hills Primary School, a Commack district school in Dix Hills for 200 students, that meant pulling dozens of desks out of classrooms and putting them elsewhere in the one-story, 1950s-era building.

“The storage space is now filled with furniture,” Superintendent Donald James said with a laugh as he walked through a first-grade classroom. Eleven tiny desks, each affixed with a clear three-sided shield, sat spaced apart in the room. Other desks had been removed, as had the reading carpet in front.

Lowering classroom occupancy meant Rolling Hills had to create new instructional spaces elsewhere as part of a grand reprogramming of what happens where in the building.

The cafeteria will now host morning and afternoon child care, as the child care space was turned into an isolation ward for sick children. Half the gym is piled high with unused furniture, while the other is marked with well-spaced pieces of tape where children will wait for parents to pick them up.

Both Rolling Hills and Baldwin High, another 1950s-era building, where around 1,600 students are enrolled, are now covered with new signs and markings. There are stripes showing students where to wait outside entrances; stickers and flyers encouraging social distancing; and arrows taped to floors indicating which direction people should walk.

“There’s reminders everywhere,” Camhi said. “This is not what they remember their school looking like,” she said of students. “It’s going to be a little shocking when they first come in.”

Minimizing unnecessary movement and intermingling was another overarching redesign goal. In Baldwin High, stairways and parts of hallways are now one-way only, and areas where students congregate — lockers, locker rooms, and part of the large entry foyer — have been blocked off or closed. At Rolling Hills, the district laid a new concrete walkway outside so students in different grades could have separate building entrances and exits, and students will eat lunch at their desks.

Keeping the virus out of the buildings, or contained if it makes it inside, was another key design concern. A temperature scanner resembling an airport security gate now stands at the entryway of Rolling Hills. Water fountains have been shut off in Baldwin High, where the district has installed water bottle fillers instead. Hand sanitizing stations are ubiquitous at both schools.

Both districts also are seeking to move activities outside, and bring outside air in, as much as possible. Camhi said Baldwin ordered screens for all its windows so they can stay open until it’s cold. James said Rolling Hills teachers are encouraging students to come to class with placemats or beach towels for outdoor reading and math classes.

The 1918 pandemic, which killed hundreds of thousands of people in the United States, may provide little help to educators today puzzling through how to safely reopen schools.

Howard Markel, a physician and historian at the University of Michigan who has studied the 1918 flu, said schools in most major American cities simply closed. Cities that kept schools open — New York, Chicago and New Haven — did not implement any design changes Markel knew of to make in-person instruction safe.

“Those cities didn’t do very well,” he said, “and I would suggest that not having school closures was part of that.”

The design changes in Baldwin and Commack, while necessary, may not create ideal learning environments, Camhi and James acknowledged.

“We did everything we could for decades to get away from this — kids in rows, kids far apart,” James said, looking over the spaced-out desks in the first-grade classroom. But “there’s nothing we can do. If we want them in school, it has to be like this.”

James noted, however, that the design of schools is only part of what makes them work.

“The teacher is the personality that will bring the room to life with the kids,” he said. “I think that’s what we need to see.”

Amy Ogata, an art historian at the University of Southern California who has written about the history of school design, voiced a similar perspective.

“The key to these educational environments are the people in them,” Ogata said. “The pandemic doesn't change that.”