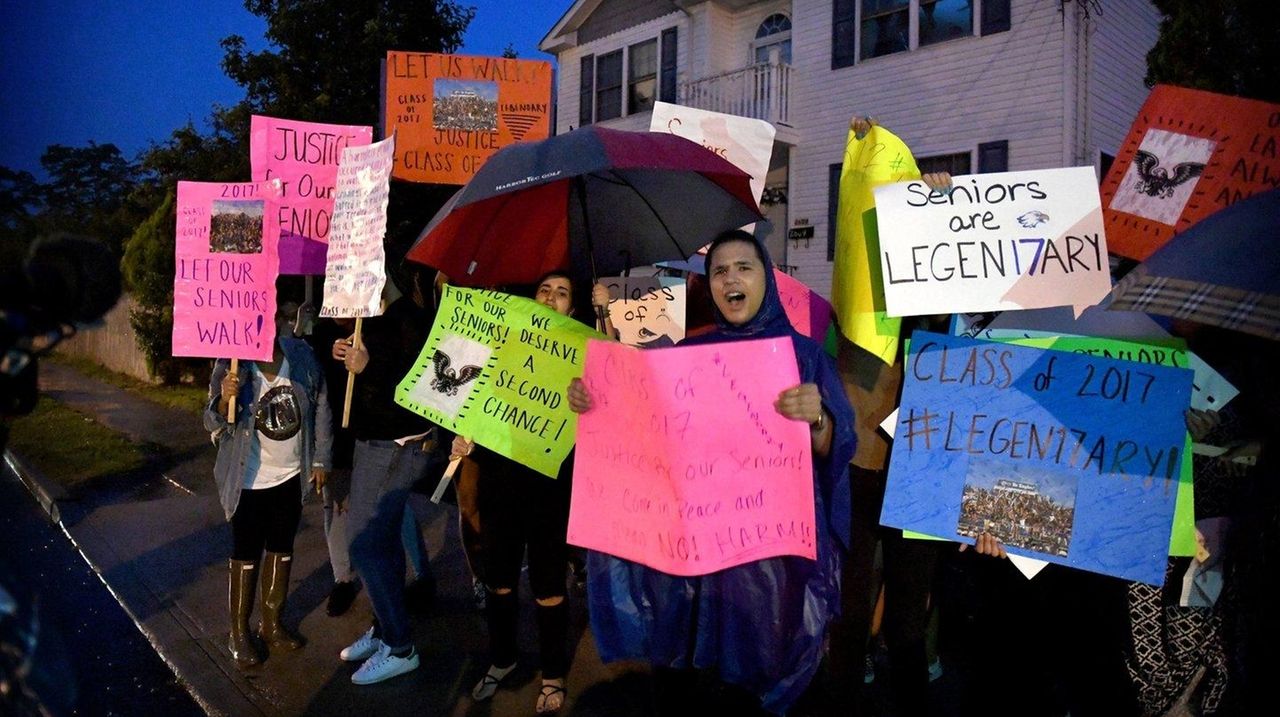 Parents urged the Copiague school board on Monday, June 19, 2017, to reconsider its action barring a group of seniors from Thursday's high school graduation. The district handed down the punishment after some students broke in and vandalized Walter G. O'Connell Copiague High School on June 9. (Credit: Newsday / Chuck Fadely)

Students and parents urged the Copiague Board of Education Monday night to reverse its action barring a group of seniors from graduation ceremonies in connection with vandalism of the high school.

Parents told Newsday last week that more than 30 seniors were barred from graduation, which is set for Thursday night outside the school.

In a roughly 15-minute statement, school board President Brian J. Sales said that the decision was “agonizing,” but called such acts “unacceptable and inexcusable.”

District: 30 barred from graduation after vandalism

“We are doing our best to identify all of those involved,” Sales told the crowd in the cafeteria at Copiague Middle School.

District officials said the incident occurred June 9 when some students climbed through a second-story window at about 2 a.m. The break-in activated the school’s alarms and alerted Suffolk police. Security cameras recorded the students’ actions.

At issue Monday night was the level of involvement of students whose parents said they were barred from participating in the graduation. Maria Roman said her granddaughter “didn’t vandalize anything.” She said the ones who were culpable “should be punished, not my granddaughter.”

Board members sat silently while district residents criticized the punishment. Sales told the crowd that the board would not comment on the issue, citing students’ privacy. “We will not debate you,” he said.

Parent Jolanta Bazyte said her daughter was suspended but said, “I’m asking you to have compassion . . . to have faith in these kids.

Chanting “let us walk,” more than a dozen students protested across the street in pouring rain as vehicles honked horns in support.

Jada Cornwall, 18, said she did not enter the school but was caught by police a block away. “It’s unfair. There were a lot of us who didn’t go into the school,” she said.

A statement published last week on the district’s website said the students’ actions were not “a mere ‘prank,’ as has been suggested by some. . . . The behaviors exhibited by the individuals involved in this incident are unacceptable and inexcusable, they violate the District’s Code of Conduct, and do not represent the fine character and wonderful accomplishments of our senior student body.”

Suffolk police have said the district would handle the case internally.

School officials have declined to identify the number of students punished, as well as the punishment imposed. They said they would not bring criminal charges, though they regarded the incident as serious and potentially hazardous.

The parents interviewed by Newsday said that about 70 seniors were involved and that most showed up expecting to scatter balloons and paper streamers. Students told the newspaper that six students, wearing masks, committed more serious vandalism at the school.

There are 388 seniors at Copiague High School, which has an enrollment of about 1,600 students.

What to do at the Port Jefferson Ice Festival this weekend
Early trans-Atlantic flight attendant dies at 96
Wave of uncertainty for LI schools as appeals judge weighs mask mandate
Second NYPD officer shot in Harlem on Friday has died, commissioner says
Mask confusion: Parents, students wonder what's next with school mandate
Condo residents having a ruff time over dog park near their home
Didn’t find what you were looking for?