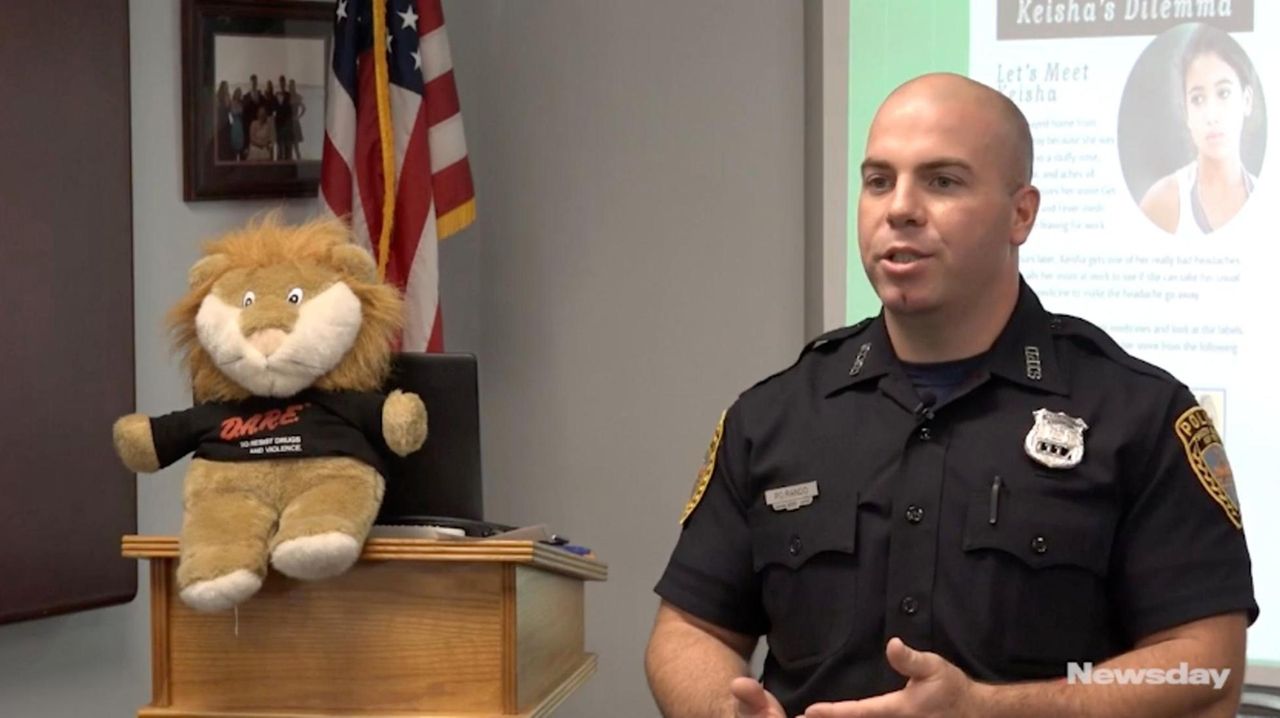 Shelter Island Police Department D.A.R.E. Officer Anthony Rando speaks with students at Shelter Island School on Oct. 16 about the opioid epidemic and issues with other drugs so they can make safe, responsible choices when confronted by them. Credit: Gordon Grant

The Shelter Island school district is the first in the state to roll out a new D.A.R.E. program aimed at combating the growing opioid epidemic, and other districts across the Island and state are looking to follow.

“It could happen anywhere, so why not give our kids all the protection, all the information, all the preventative dialogues they can have with other people, so that when they’re faced with this they know what to do," Shelter Island schools Superintendent Christine Finn said.

If the program prevents one person from overdosing, it will be a success, she said.

“We know that children can come into contact with this fairly easy, if they had an injury, if their parent took something, their grandparent took something, and they had it in their house,” said Shelter Island Police Officer Anthony Rando, who teaches D.A.R.E. in the 200-plus student K-12 school district. “We want them to know what this medication is and the dangers of it, so they can make safe and responsible choices.”

Rando is one of 2,000 officers nationwide who has been trained in the new curriculum, and began teaching it to seventh-graders in mid-October.

There were 555 deaths related to opioids in 2016 — 195 in Nassau County and 360 in Suffolk County, according to data from both county medical examiner’s offices.

The remote community of Shelter Island, with its year-round population of about 2,500 residents, isn’t immune to the epidemic, Police Chief James Read said. There were 26 drug overdoses between 2013 and 2017, he said. “Every community, regardless of size, is battling that opioid addiction.”

School districts across the state and Island have responded to the epidemic, with some, including Shelter Island, stocking Naloxone in school buildings. Commonly known as Narcan, it binds opioid receptors in the brain to block the effect of drugs such as heroin.

D.A.R.E. was founded in 1983 in Los Angeles and has continued to evolve, in 2017 developing its newest curriculum, D.A.R.E. America Northeast regional director Mark Medford said. The D.A.R.E. program is 10 weeks, he said, and the new curriculum is an additional two 45-minute lessons.

The curriculum was developed by the D.A.R.E. America Scientific Advisory Board and its training and curriculum committee, which consists of experts in prevention education, medicine and addiction. It’s to be used as a supplement to D.A.R.E.’s lessons that focus on providing students with the skills to make responsible decisions when faced with high-risk behaviors that include substance abuse, violence, bullying and internet safety, Medford said.

The lessons for middle-schoolers teach the difference between over-the-counter and prescription medication, how to read prescription labels, the dangers of misusing medications, and introduces them to the opioid epidemic. The elementary program focuses on who to call in case of an emergency and what’s safe to touch, smell and eat. The high school lessons go deeper into the relationship between prescription drug abuse, opioid drug abuse and heroin. There’s also a presentation for parents and the community.

“It just keeps getting more and more impactful based on the age group,” Medford said.

The curriculum is being rolled out nationwide, and the first trainings will take place for D.A.R.E. officers in New York State on Nov. 8-9.

“I know how important it is. I know how it impacts our community, so I wanted to get ahead of it right away, as soon as possible,” said Rando, who was contacted by one of the D.A.R.E. America educators and asked to be the first in the state to roll out the seventh-grade lessons.

The program costs the police department about $5,000 annually, but the new curriculum is no additional cost other than supplies, Read said.

Sitting with the 11 other seventh-graders in her Shelter Island classroom Oct. 16, Kaitlyn Gulluscio, 12, learned the difference between over-the-counter medication and those prescribed by a doctor.

“If I get hurt and I need to take prescription medicine, I know who to call now in case I don’t know how to take it, and I’ll need to know how much to take,” she said.

Gulluscio had D.A.R.E. with Rando in the fifth grade, and said she recognizes the importance of the lessons he teaches.
“If we don’t know like how much these drugs could hurt us, we could get hurt by it and possibly die,” she said.

Her classmate, Noah Green, 12, said he learned to “check the labels when you’re using medicine because you could get sick if you don’t.”

Other districts and law enforcement agencies on the Island, including Southampton Village police and Our Lady of the Hamptons Regional Catholic School, said they are looking into the program.

Sister Kathryn Schlueter, principal of the regional Catholic school, said they are going to use the curriculum starting with the sixth-grade program.

“Every week there’s something with an opioid issue,” Schlueter said. “I think our kids hear about it, but I don’t think it means anything until it’s explained down at their level.”

She also hopes to host a parent presentation. “This is a serious epidemic that’s coming into our community. You’ve got to head it off,” she said.