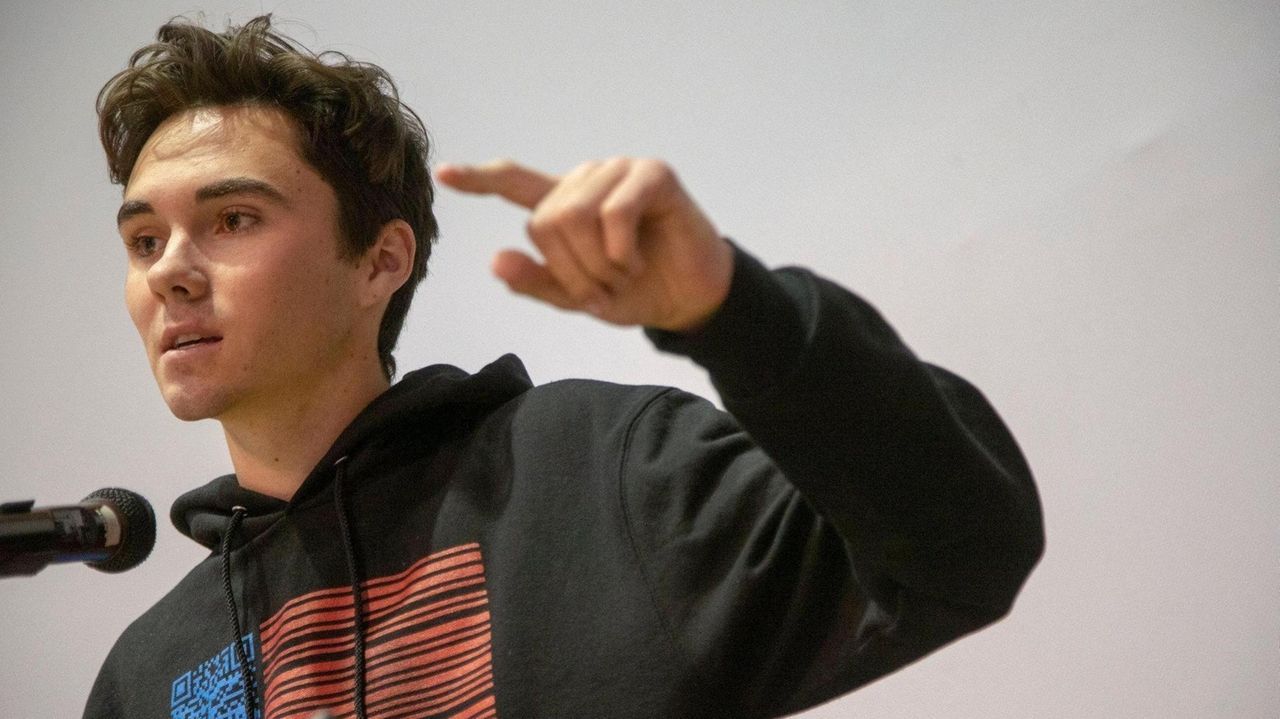 Gun safety advocate David Hogg, 18, told students at Nassau Community College on Wednesday that he is pressing forward, looking ahead to the 2020 presidential election when he and other members of a national group that he helped organize will have another chance to support candidates who back their calls for stricter national firearms controls. Hogg was a senior at Marjory Stoneman Douglas High School in Parkland, Florida, when a lone gunman killed 17 people and injured 17 others with a high-powered assault rifle on Valentine's Day. Credit: Howard Schnapp

Parkland shooting survivor David Hogg remembers only too well the cries of wounded students at his Florida high school on Feb. 14. He is not remaining stuck in that day of tragedy.

The 18-year-old gun safety advocate told students at Nassau Community College on Wednesday that he is pressing forward, looking ahead to the 2020 presidential election when he and other members of a national group that he helped organize will have another chance to support candidates who back their calls for stricter national firearms controls.

“What my goal is for 2020 is to create a youth voting bloc that is even greater” than the huge turnout in the Nov. 6 midterm elections, Hogg told a mostly receptive audience of 300-plus students and others gathered in a college auditorium on the Garden City campus.

“We’ve changed America, and I’m really proud of that,” he said.

Hogg was a senior at Marjory Stoneman Douglas High School in Parkland, Florida, when a lone gunman killed 17 people and injured 17 others with a high-powered assault rifle on Valentine's Day.

Nikolas Cruz, then 19, a former student of the school, was identified by witnesses as the assailant and arrested. Authorities said he had legally purchased the AR-15-style assault weapon used in the attack.

Cruz confessed to the deadly rampage, according to court documents, and has been indicted on multiple counts of premeditated murder and attempted murder. Now 20, he is awaiting trial and remains jailed in Broward County.

Immediately after the shooting, Hogg and a core group of Stoneman Douglas students — Cameron Kasky, Alex Wind, Sofie Whitney, Emma Gonzalez and others — spoke out strongly against gun violence, drawing a national spotlight.

In two days, they formed the political action group Never Again MSD to press for tighter laws regulating weapons and began organizing the March for Our Lives, to be centered in Washington, D.C.

The demonstration drew an estimated 800,000 to the nation's capital on March 24, and hundreds of thousands more participated in companion marches in cities, towns and villages across the country.

Since then, Hogg and many of the other Stoneman Douglas students have crisscrossed the United States, meeting with students and families affected by gun violence, including the survivors of the 1999 Columbine High School massacre. They have spoken as well for measures to improve gun safety, such as banning the sale of assault weapons and universal background checks for those who buy weapons.

Hogg himself has taken a year off from further studies to pursue his advocacy work. Wednesday's appearance at NCC — two separate speeches and question-and-answer sessions — drew standing-room-only crowds.

This represented one of the campus' best turnouts ever, according to Phyllis Kurland, an NCC professor and counselor who organizes such events.

"The students know who he is. He's young, he just graduated from high school in June. And look what he accomplished," Kurland said.

Most audience members did appear to relate to Hogg, who wore a hoodie, jeans and sneakers and opened his talk with a casual, "Hi guys."

During the Q-and-A session, a few students challenged the speaker's positions on subjects such as the U.S. Constitution's Second Amendment, which protects the right to bear arms. On that point, Hogg noted that the amendment also calls for a "well-regulated militia."

"I think he made a connection," said Nathaly Lopez, 18, of Bellmore, a first-year student at NCC. "I mean, he's our age."