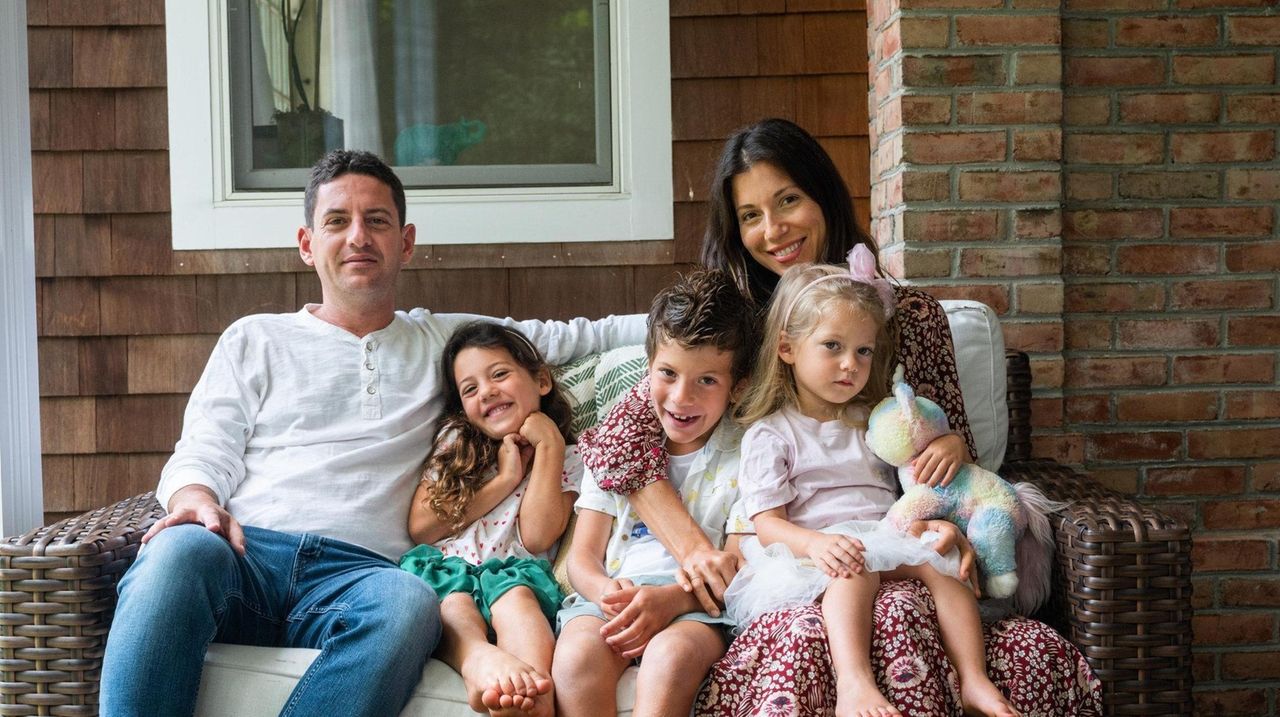 The Stern family, of Water Mill, and the Hochhauser family, of Quogue, are New York City residents who also have homes on Long Island's East End. They spoke about their decisions to stay on the East End to avoid the coronavirus and keep their kids in school on Long Island. Credit: James Carbone, Gordon Grant

No more crowded city schools. No more worries the kids will catch COVID-19 on the subway. Just a lot of open space, fresh air and schools away from the urban doldrums of a pandemic.

Haley Stern and her family wanted all that when they fled their Gramercy Park apartment in New York City in the spring for their summer home in Water Mill on Long Island's East End. She since has decided to stay and enroll her youngest in a nursery school and her two other children in the Ross School, a private school that offers in-person schooling five days a week.

"My kids have never been happier," said Stern, 35. "We all should be as happy as these kids."

Numerous city-dwellers have migrated from their cooped-up metropolitan landscape to the East End, bumping up enrollment at schools. When these transplants began arriving in the spring, they said they wanted to escape a metro area teeming with the coronavirus, shuttered schools and lockdown orders. They decided to stay for the fall, saying they wanted their children in schools that were generally less crowded than city schools and had outdoor areas where the kids could learn and play.

Moreover, they had the money to make it happen.

Mitchell L. Moss, a professor of urban policy and planning at New York University, calls the migration a "diaspora of the elites."

"They are nervous. They are apprehensive about living in New York City," Moss said. "It's not just the pandemic and the uncertainty about public schools in the city. It's the perception that the quality of life in New York City is declining."

The physical reopening of the New York City public school system is again being delayed — to as late as Oct. 1 — as the nation’s biggest school system struggles to restart during the coronavirus pandemic, Mayor Bill de Blasio announced Thursday.

About 5% of the city's population, or some 420,000 people, left the city between March 1 and May 1, according to a review of multiple data by The New York Times. The most significant population declines occurred in some of the city’s wealthiest neighborhoods, like the Upper East Side, West Village and Brooklyn Heights, according to the data. It's unclear whether they left permanently or how many moved to East End.

The East End was a logical choice for those who had a summer home or rental there, Moss said. But others have been rapidly snatching up homes and rental properties there, keeping the summer resort community pulsing with life after it usually cocoons for the colder months.

In the Hamptons, the number of contract signings more than doubled in August, and the North Fork saw a 77% year-over-year increase in pending sales, according to a report by the brokerage Douglas Elliman and the appraisal company Miller Samuel.

"The East End of Long Island has fabulous geographic advantages," Moss said. "People moved out there for the summer, and they've discovered that it's easy living. They want a big house."

School officials in Amagansett, Sag Harbor, East Hampton, Aquebogue and elsewhere are reporting increases in their enrollment, prompting some to scramble for additional space and teachers.

Enrollment at the Amagansett School has nearly doubled in grades K-6, from 74 students to 135, Superintendent Seth Turner said.

"Many families have traditionally spent summer months in Amagansett, and for a variety of reasons they are choosing to remain and become part of our outstanding school community," Turner said in a statement.

The Mattituck-Cutchogue school district has 46 new students, many of them from New York City, Superintendent Jill Gierasch said. The total enrollment this school term is 1,080, though some students have moved out of the district. She said three-quarter of the new students are in the elementary level.

The Ross School in East Hampton has so many new students — 155 compared to 116 the year before — that it has reopened its second campus in Bridgehampton, which had been for sale for two years. Many of the new students at Ross, where tuition can reach $45,000 a year for high schoolers, come from the Big Apple, said Andi O'Hearn, head of advancement and operations at the school, which has 385 students.

"These parents are making tough choices for their children. They're uprooting their lives," O'Hearn said.

The Sterns moved to their summer home in the Southampton hamlet of Water Mill in mid-March, just as the kids' schools were shutting down and going to remote learning. Haley Stern, a stay-at-home mom, said she saw the coronavirus sweeping through the city and kept thinking about how easily kids pick up illness. The family, including her husband David, who works in real estate, felt trapped in their Manhattan apartment, she said.

Remote learning was, in a word, "horrible," she said. Noah, 7, didn't even know how to turn on the computer. And Layla, 5, seemed always distracted by all her toys being so close at hand, she said.

By June, unconvinced that city schools would reopen and remain open amid the pandemic, Stern enrolled Noah and Layla in the Ross School and their youngest, Jade, 2 1/2, in a nursery school.

Moving out east has not eliminated all concerns about COVID-19. When Stern told Noah he'll have to wear his mask every day at his new school, he responded, "Are you kidding?"

His mother said she thought: "If wearing a mask is the worst part, I'll consider this a win."

She said the family is still deciding whether to make the move permanent.

At the Ross School, school staff spent the summer readying classes to accommodate the enrollment surge and social distancing, O'Hearn said. The nursery school kids through the fourth grade have been moved to the reopened campus. There, every class has an outdoor entrance and bathroom, so the kids won't be crisscrossing each other in the halls, she said.

The school also has hired a handful of additional teachers, mostly for the elementary grades that have seen the greatest influx of new kids, she said.

Peconic Community School, a private school in Aquebogue, plans to expand in the coming weeks into a nearby vacant garden center to accommodate an enrollment boom, according to school co-founder Liz Casey-Searl. The school, which serves nursery age through seventh grade, has seen enrollment grow to 99 students from about 60 last year, she said.

"We had to hire new teachers and find additional space, and doing it during a pandemic was challenging," Casey-Searl said. The school, where tuition ranges from $5,000 to $16,000 per year, hired four new teachers and made some part-timers full time, she said.

For Jaime Hochhauser, who had been living with her family in Forest Hills for seven years, the decision to move out east was easy. She grew up in the Hamptons, and the family has relatives living in Southampton and Water Mill. They stayed with relatives for a while before renting a home in Westhampton on Labor Day, she said.

Having bad experiences with remote learning — her son Sam's lessons were little more than a series of Google links, no live instruction — she enrolled her two children — Sam, 8, and Nicolas, 11 — in a public school in Westhampton Beach, where they are attending in-person instruction five days a week.

The boys miss their old friends, but they're excited about going to a school that offers music classes and gym three times a week, with lots of outdoor activities.

"It was an emotional first week" of school, said their mother. "All their teachers have been super-embracing."

Hochhauser said she likes the community feel there — the larger spaces, friendliness and the sense that more people are wearing masks and obeying the virus rules. She and her husband run a household staffing company, which gives them the flexibility to work from home much of the time.

She's thinking of making the move permanent. She's been wanting to move out east for some time, and the coronavirus convinced her about the benefits.

Her husband, Matthew, born and bred in Manhattan, still needs some convincing, she said.

"He's coming around after seeing all the positives of it," she said.