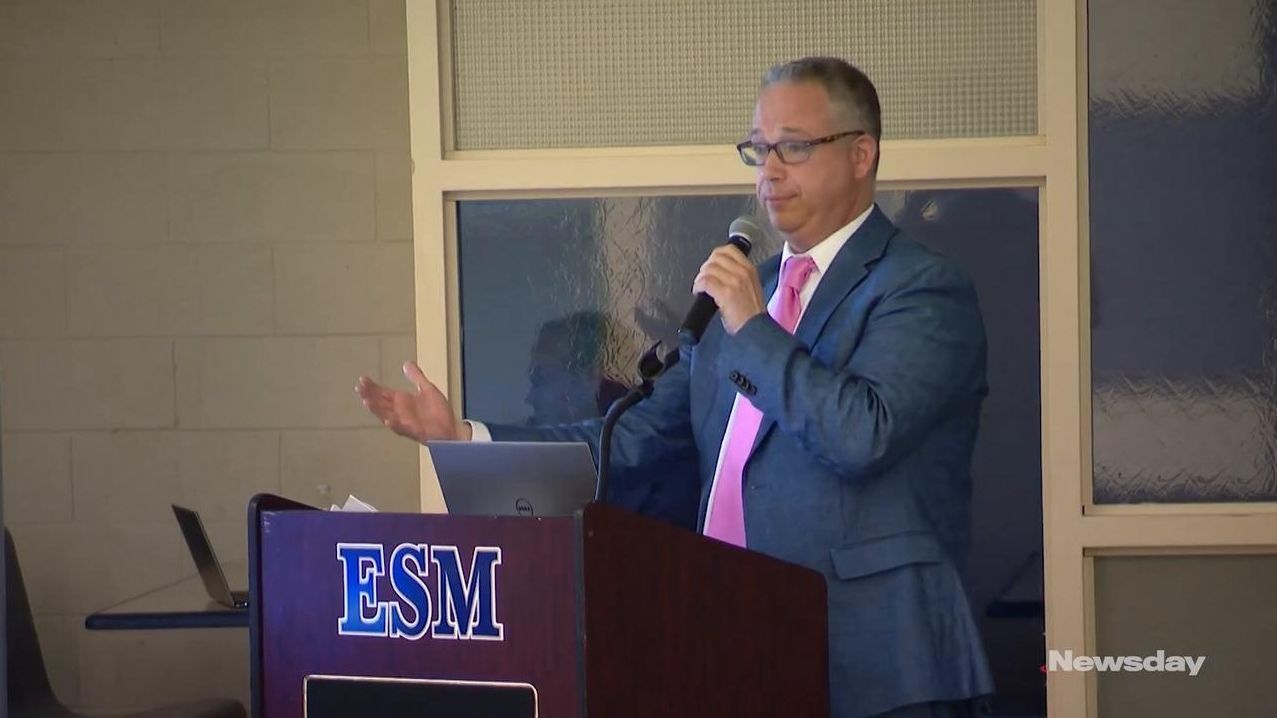 The Eastport-South Manor school board, facing both fiscal and management stresses, voted 6-0 Wednesday night to submit to district voters a budget of just over $97 million for the 2019-20 school year. School board president Nicholas Vero also addressed the board placing Superintendent Patrick Brimstein on paid administrative leave. Credit: News 12 Long Island

The Eastport-South Manor school board, facing both fiscal and management stresses, voted 6-0 Wednesday night to submit to district voters a budget of just over $97 million for the 2019-20 school year that would add armed security guards and elementary teachers.

The 3.69 percent tax increase under the spending plan would exceed the district's cap, which officials said is 2.75 percent. Because of that, it will require approval by a 60 percent supermajority of those voting on May 21.

The budget calls for a 3.81 percent hike in spending.

Following the vote, board president Nicholas Vero praised the efforts of the district’s chief financial administrator, Tim Laube, in righting the system’s finances. “He restored our reserves, which put us in good standing with the state,” Vero said.

School board places superintendent on leave

As the budget discussion began, several board members questioned whether additional spending in the coming year could put the district in a deeper financial bind later on.

“I don’t want our teachers to lose their jobs again,” said one trustee, Marion Diener, referring to layoffs that occurred earlier this year. She suggested cutting back on planned field trips — a move to which the board ultimately agreed.

Crystal Archer, 38, a mother of two young students, sitting in the rear of the Eastport-South Manor Junior-Senior High School cafeteria with other audience members, voiced reservations over the proposed tax hike. “Understanding that the school district is facing what they call a fiscal crisis, I’m not convinced this is fair,” Archer said.

The meeting came only two days after the school board suddenly placed Superintendent Patrick Brimstein on paid administrative leave. Neither the board nor the superintendent has publicly discussed their differences, which in the community are widely thought to revolve around fiscal issues. Brimstein has been the system's schools chief since May 2017.

Vero opened the meeting by repeating what he had said the day before, that board members could not discuss the suspension due to confidentiality rules.

Eastport-South Manor is one of only two districts on Long Island this year to announce that it intends to exceed its state-imposed tax cap — a limitation established in 2012-13 and recently made permanent.

Two weeks ago, local officials said, another problem arose when they discovered they could incur up to $700,000 in additional costs in the 2019-20 budget year for placing special education students in specialized out-of-district facilities.

Laube, the district's assistant superintendent for business and school operations, said in a phone interview Wednesday afternoon that he has recommended meeting those additional costs with the help of surplus funds left over from the current year, rather than through any further increase in taxes.

But Laube cautioned that his suggested move is a one-year fix, and that other means of meeting costs might be required in 2020-21.

"We're not going to the taxpayers for it, and we're not cutting programs," Laube said. "But we don't have the wiggle room we used to have."

Laube took on extra responsibilities this week, when Brimstein was placed on leave. He now is in charge of daily operations, along with Linda Weiss, assistant superintendent for personnel and district accountability.

As drafted, next year's budget would restore three elementary teaching positions that had been eliminated this year and would add six armed guards to be stationed throughout the district. Voters would have the option of approving the guards on a separate $512,411 ballot proposition.

In January 2018, Eastport-South Manor was identified by the state comptroller’s office as among 26 districts statewide facing fiscal stress. A drop in the district’s cash reserves led to a downgrade in its credit rating from Standard & Poor’s.

Brimstein and Laube both were brought into the system in 2017 to deal with a looming budget deficit. During the school year that followed, Eastport-South Manor cut 70 employee positions, including slots for 28 teachers.

This past January, the comptroller's office upgraded Eastport-South Manor's status a notch, describing the district as "susceptible to fiscal stress." A year earlier, the district had been deemed in "moderate" stress, the most serious category after "significant" stress.

Wyandanch, the other district on Long Island seeking a cap override, currently is in the "significant" stress category. That district's board last week proposed a $77.8 million budget that carries a tax hike of more than 40 percent.