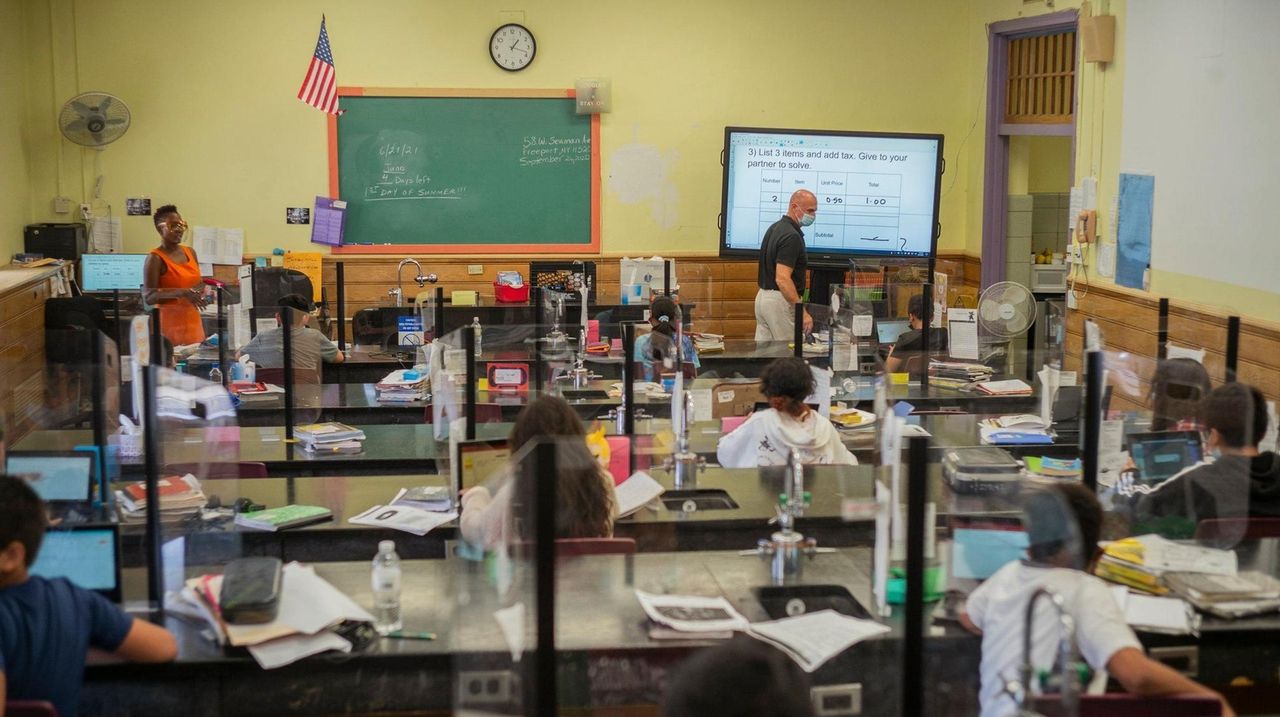 Administrators, students and parents talk about the positives and negatives of the school year. Credit: Newsday / Reece Williams and Morgan Campbell

This story was reported by Michael Ebert, John Hildebrand, Carol Polsky, Craig Schneider and Joie Tyrrell. It was written by Schneider.

We got through it.

The 2020-21 school year will be long remembered for the way Long Island schools — the students, teachers, administrators and staff — came together to meet the challenges of COVID-19.

The students, who many people said would never wear masks, did it.

The teachers, who many people said would never learn the technology for distance learning, did it.

The school staff, which had to take on extra tasks such as contact tracing and temperature checks, did it.

As Long Island's 656 public schools, 476,000 students and 36,000 teachers bring this tumultuous year to a close, the prevailing sentiment was perhaps best captured by eighth-grader Ashley Benitez DelCid, who spoke during a moving-up ceremony Monday in Freeport.

'We did it! We had our ups and downs throughout the year, but look where we are now. Ready to start a new chapter.'

"We did it!" said Ashley, a student at J.W. Dodd Middle School. "We had our ups and downs throughout the year, but look where we are now. Ready to start a new chapter."

It was a school year filled with anxiety and confusion, with teachers learning new ways to teach and students picking up new ways to learn. It was a year of social distancing, self-isolating, disrupted learning, hand sanitizer, mask-muffled conversations, and trying to learn algebra on a computer at the kitchen table.

Ariana Glaser, 14, a freshman at Smithtown High School East, said she felt like she started high school last September without finishing middle school. That's because she spent much of the prior spring learning at home.

This school year, Ariana, who is an A student, learned remotely for much of the year, often waking up five minutes before signing in to class.

'It didn't feel like I was in school. I felt like I was watching from the wings.'

"It didn't feel like I was in school," she said. "I felt like I was watching from the wings."

Growing up was harder

The majority of Long Island public schools started the academic year teaching students under a hybrid model, meaning some students in-person and others online, according to a Newsday analysis. Roughly 76,000 students began remote-only.

During the school year, several districts added more days of in-person learning back to the calendar. A few, such as Shoreham-Wading River and Three Village, started and ended the year with students going to school in-person all five days. Some districts eventually eliminated the hybrid option and had parents choosing between in-person or virtual full time.

By mid-June, nearly 80% of Long Island students were learning on site, according to estimates in data analyzed by Newsday from the state’s COVID-19 Report Card.

Students learned a lot about the grist of life. They saw the daily tally of hospitalizations, deaths, lockdowns and shutdowns. They saw the fear on their parents' faces. Some lost loved ones.

As much as young people saw the school community come together, they also saw the debates over opening up schools, the wearing of masks, and the various hot-button controversies such as when to restart school sports.

Still, the coming together was inspiring, Haase said.

"It's amazing what we were able to do, and I hope we never have to do it again," said Haase, who is also head of the school district's teachers union.

Lawrence High School senior Kimmy Ramirez expressed her sentiments in her artwork. One work was titled "Dangerous Sneeze" and captured the alarm of when someone coughs or sneezes in public.

Lawrence High School senior Kimmy Ramirez expressed her sentiments about going to school during the pandemic in her artwork. One work was titled “Dangerous Sneeze,” and captured the alarm of when someone coughs or sneezes in public. Others included "Foggy View" about wearing masks and "Swimming Through."

Looking ahead, the 18-year-old said something probably no young person should have to say.

"I look forward to having human interactions again," Ramirez said.

'Around the holidays, it got scary'

From the outset of the pandemic, there was a pronounced gap between students who had access to computers and internet service and those who didn’t. Students in struggling neighborhoods, such as Brentwood and Central Islip, where the virus hit the hardest, often suffered the most. Schools scrambled to get them computers and Wi-Fi, but some had to wait months due to a backlog of computer orders.

In the end, the pandemic response helped somewhat to bridge the technology gap between the haves and have-nots.

"The gap still exists in terms of technology and equity," said Dafny Irizarry, president of the Long Island Latino Teachers Association. "I hope this integration was not just during the pandemic, and that it will continue."

Schools were not a major spreader of the virus, but the illness made its way into many buildings. Sachem, the second-largest district on the Island with about 12,000 students and 2,000 staff, had 944 positive cases among students and 200 among staff, according to state figures.

'It was pins and needles every day.'

"Around the holidays, it got scary," Pellettieri said. "We were looking at each day to decide whether we needed to close. It was pins and needles every day."

School nurses, accustomed to handling tummy aches and colds, helped with daily temperature checks, and, when a student showed virus symptoms, isolated them and called parents to pick them up, Pellettieri said.

"It was awful," said Ric Stark, a physics teacher at Hewlett High School.

At times, half of his class was in the room and half were livestreaming from home. And he had to teach to both. He often felt distant from the students at home, he said.

"They weren't actively participating in class as much, and there was nothing you could do," said Stark, who is also head of the district teachers union.

‘Tough to get them to dance again’

For all of the challenges that had to be navigated, the school year brought to light some aspects of education often taken for granted. Turns out, kids really do like going to school. The importance of the student-teacher bond came to the fore, if only because of the lack of it, as well as the huge role that schools play in the community.

It was a difficult year, said Lynnette Carr-Hicks, director of Uniondale High School’s show choir and concert choir. After months of digital concerts and remote study, the few students who came back in person in March "were so happy to see each other and see me. But it was tough with some of them, tough to get them to dance again," she said.

The pandemic took a toll financially on schools. Costs of salary raises, COVID-19 safety measures and other expenses appear to have reduced school districts’ cash reserves, though figures are estimates and subject to possible change.

$417 million The increase in state financial aid for districts in the Nassau-Suffolk region for 2021-22 — a boost three times higher than in recent years.

The latest figures for Long Island reserves, known as fund balances, total $2.77 billion, according to Newsday calculations based on fiscal "report cards" released by the state Education Department in May. Total reserves are down 3.1% from the $2.86 billion listed as the actual total for the current year.

Some good news: Districts in the Nassau-Suffolk region are due to receive a $417 million increase in state financial aid for 2021-22 — a boost three times higher than in recent years.

For all the misery of the past school year, Long Islanders have much to be thankful for. The virus did not sweep through the schools and the children. The schools didn’t see a mass exodus of teachers. In fact, most teachers came back to the classroom in September not even knowing the level of danger.

There were even some happy moments.

Sandy Sanchez, a Lido Beach mother with two daughters in the schools, said she kept her kids at home for much of the school year.

"For us, it was a loss of education but a gain in spending time together," Sanchez said. "We did a lot of cooking together, playing games, listening to music and dancing."

Looking ahead, educators say they worry about the long-term effects of the pandemic on children, both academically and emotionally. Concern is especially high for those students living in low-resourced homes who lacked a computer and internet service.

Some students might suffer "educational scarring," meaning they've fallen so far behind that their education is significantly hampered. That could threaten their academic future and job prospects, studies say.

Beyond that, there's concern about the long-term effects on their mental health, having lived through the months of isolation and extra stress, said Wilfred Farquharson IV, a psychologist and director of the Child and Adolescent Psychiatry Outpatient Clinic at Stony Brook Medicine.

'We're seeing more anxiety about the virus and lack of interaction with peers.'

The clinic has seen about a 25% increase in child patients since the pandemic began, he said.

"We're seeing more anxiety about the virus and lack of interaction with peers," he said.

Farquharson said most children likely will recover once they get back to normal schooling, but parents and schools need to watch out for signs that a child is no longer interested in school or seeing their friends, and offer help and counseling.

The sun was shining through clouds. Some 1,500 people were gathered on the athletic field of Atkinson Intermediate School in Freeport for the moving-up ceremony for Dodd Middle School eighth-graders on Monday. Families stood together, friends talked, people smiled and hugged, and most wore masks.

It was a long way from last year's graduations on Long Island, many of which had students and families drive by in their cars, windows closed.

Looking at the scene in Freeport, Superintendent Kishore Kuncham said, he saw a glimpse of life after the pandemic. It made him think, he said, of how the children showed their determination to get through this crisis "so naturally."

"The students were my inspiration," he said. "They are the COVID Warriors."