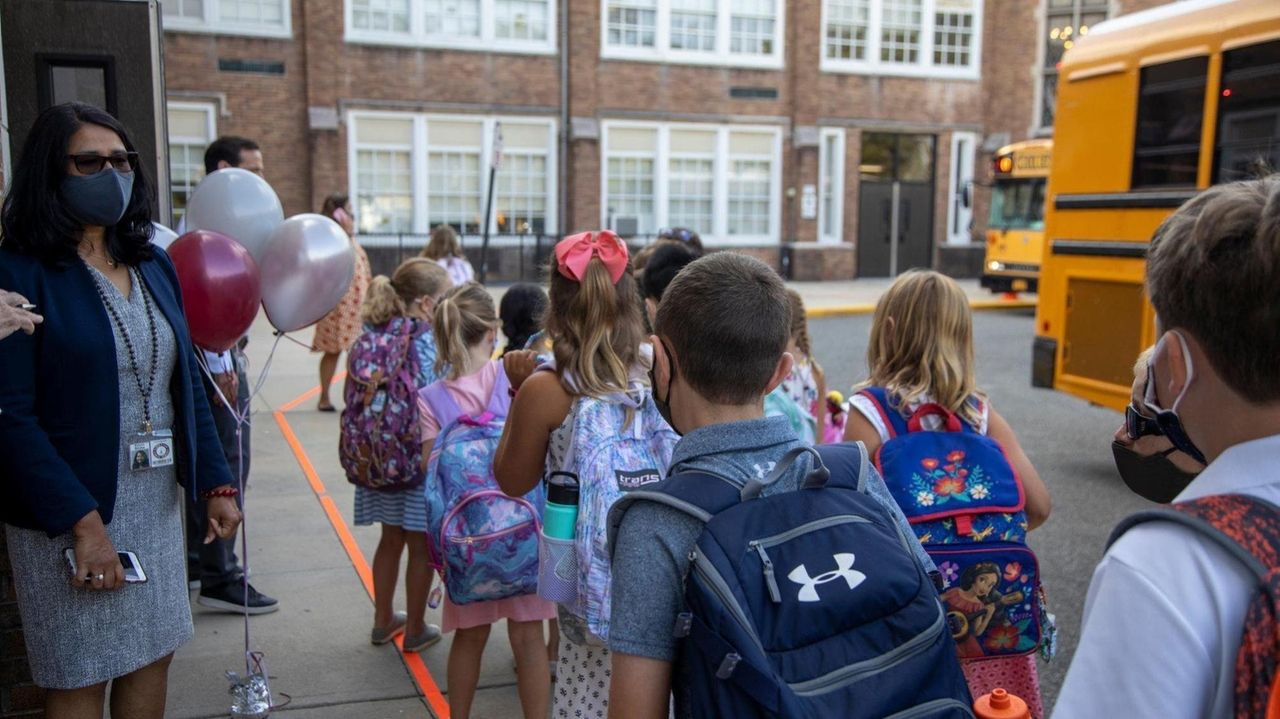 Shepherding hundreds of 7-, 8- and 9-year-olds in and out of school is never simple, especially in a year of pandemic, when students are trying to maintain a 6-foot distance while preventing masks from falling off their noses.

But take it from Linda Norton, principal of the Stewart School in Garden City: Escorting them out the door is much easier than escorting them in.

At 8:30 Tuesday morning, Norton stood with other staffers at a semicircular driveway, directing bunches of students to their classes and wondering when the next buses would pull up and drop off their passengers. By 2:30 p.m., in contrast, buses were lining up with clocklike efficiency, and the students knew where they were going — out.

"It took 10 extra minutes, but all the walkers are gone, safely back to their homes," said Norton, now in her 14th year as Stewart's principal. She explained that dozens more students are opting to walk home this year, due to families' uncertainties over potential health risks on buses, where children cannot always observe the same social distance available in classrooms.

Garden City's upscale school system, which enrolls about 3,800 students, was among more than 60 districts that reopened Tuesday across Long Island. It was the first time in nearly six months that schools had provided face-to-face instruction since they were closed down abruptly in mid-March.

Tuesday's reopening was the biggest of the season on Long Island, and many at Stewart said they were pleased with the results. The elementary school enrolls about 450 students in grades two, three and four. More than 150 fifth-graders have been moved to the district's middle school, to provide more space for the younger students.

Zeynep Vitale, the school's PTA director, said a daughter enrolled in third grade came home shortly after 2:30 p.m. dismissal with a big smile on her face. "She said the mask was a little hot, but that was fine," the mother said.

"I think we all feel energized by this, and I'm looking forward to a great year," said Catherine Ehrlein, a fourth-grade teacher now in her 19th year in Garden City.

One of Tuesday's most enjoyable experiences, Ehrlein said, was a traditional getting-to-know-you session, when students had a chance to talk about themselves and their summer activities. It seemed that most families opted to go camping and fishing upstate or closer to home, instead of going on overseas vacations.

Garden City staffers who took stock of their first day of school acknowledged that a few things had gone wrong, and not just the usual confusion over bus routes and class schedules. For example, too many students bunched up rather than maintaining social distance after alighting from buses or parents' cars, they said.

On the other hand, students were in school for the first time in almost six months.

"There's laughter," said Keri Hand, the elementary school's assistant principal. "This is how it's supposed to be. It's been too quiet."

The lingering threat of coronavirus infection did have its effect on Stewart School, just as it did elsewhere.

For example, parents of about 30 students there have opted to keep them in remote instruction. Generally, elementary students throughout the district are receiving five days a week of classroom lessons, while secondary students alternate days between school and home.

In Garden City, as elsewhere, school administrators are taking a flexible approach to the question of whether they might close down again in the event of a viral flare-up.

Asked about that during an interview Monday, Garden City's superintendent, Kusum Sinha, said her system's goal was to remain open. "But if we have to close, we're in a different place than we were last year, where we can pivot very quickly to remote instruction," Sinha said.