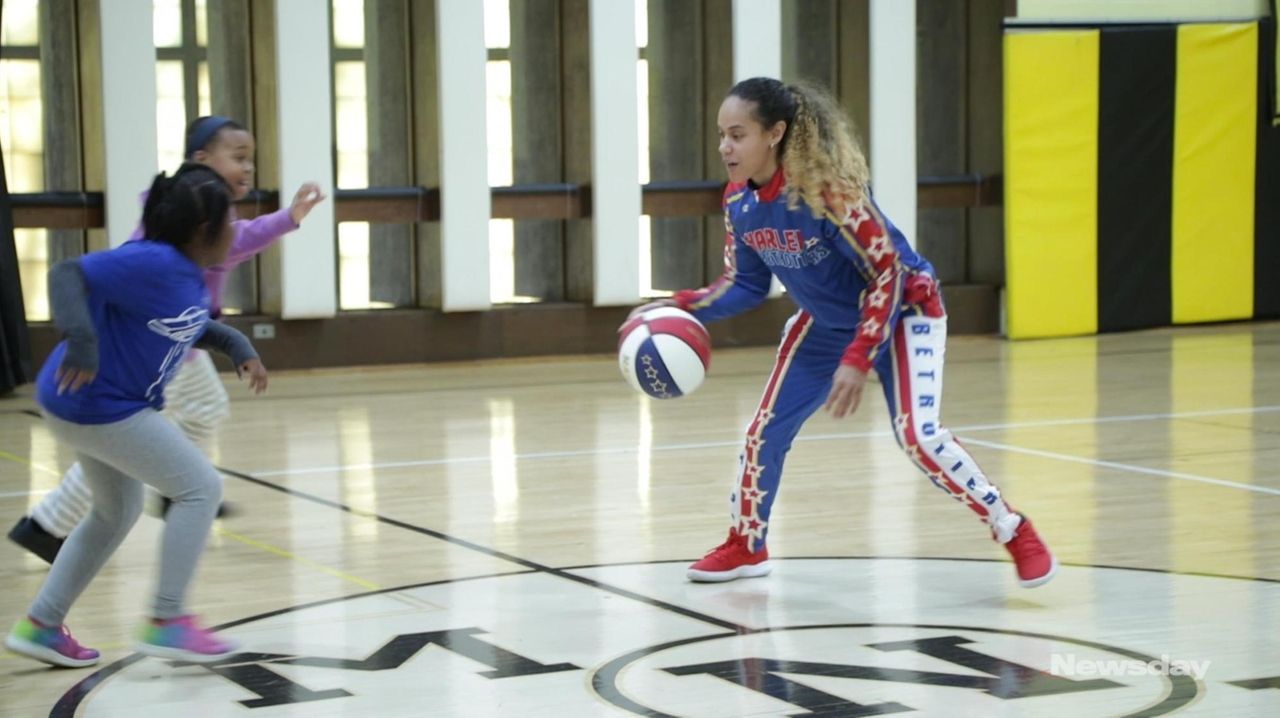 On Wednesday, Chris "Animal" Hyche, the son of two deaf parents whose first language was sign, and other members of the Harlem Globetrotters, visited students at Mill Neck Manor School for the Deaf. Credit: Newsday / Yeong-Ung Yang

Students at Mill Neck Manor School for the Deaf could not hide their delight Wednesday that a Harlem Globetrotter wasn't there only to show his basketball skills: He used sign language to communicate with them.

“I couldn’t believe it!” eighth-grader Jonathan Velasquez, 13, said through an interpreter. It was “pretty cool.”

Members of the Globetrotters who visited the school of about 140 students included forward Chris “Animal” Hyche, the son of two deaf parents whose first language was sign.

“The hearing-impaired community holds a special place in my heart because I grew up in a deaf household,” said Hyche, 30, who was reared in Jackson, Mississippi.

“The reaction was priceless,” he said of the 100-plus students in kindergarten through 12th grade who filled the school's gymnasium. “I know it’s not every day that they can get people they can relate to, especially professional athletes, so I know that made their day. And it made mine too.”

The students’ faces lit up as the players made jokes, took half-court shots and taught them how to do a few dribbling tricks.

The visit was part of the Globetrotters’ TEAM Up At School program designed by the National Campaign to Stop Violence, focusing on the importance of empathy and providing solutions for bullying, according to a news release. The acronym TEAM stands for Talk, Empathize, Ask and Mobilize.

Hyche was joined by teammates Julian “Zeus” McClurkin, 32, a forward originally from Columbus, Ohio, and Briana “Hoops” Green, 28, a guard originally from Lexington, Kentucky, who shared the anti-bullying message through an interpreter.

Years ago, the Globetrotters included African-American players when the NBA wouldn’t allow them, McClurkin said. And in1985, the team broke the gender barrier when Olympic Gold medalist Lynette Woodard joined, becoming the first female player on a men’s professional basketball team, he said.

“Not allowing a person to play a sport because of the color of their skin or gender is a form of bullying," he said.

The players encouraged the students to find a place where they feel safe, and to talk to someone if they’re being bullied. “The last thing you want to do is keep it in,” McClurkin said.

“Because our students are deaf, a lot of people don’t understand them, and at home or in their community, they feel isolated,” she said, adding that sometimes parents or family members don’t know how to sign. “Here, everybody signs, so it’s really a safe place, a place where they can come and express what their concerns are about other people [who] may not understand the sign or their voicing.”

It’s really important for the students to see stars who also are deaf or know sign language, Atlas Bogdanoff said.

Mill Neck Manor School for the Deaf, founded in 1952, provides education and services to children from 41 Long Island school districts and from New York City. The students range in age from 3 to 21. Several classrooms are integrated with deaf and students who are hard of hearing, as well as about 15 community students who serve as hearing role models.

During the visit, Velasquez excitedly signed with Hyche, who showed him how to shoot the ball.

“They’re amazing players,” he said through an interpreter, proudly wearing a Globetrotters sweatband that McClurkin gave him. “It was amazing.”

“My teammates growing up and friends in the neighborhood, they were just like flabbergasted when they came over to my house and I’m speaking to my mom in sign language," Hyche said, describing his upbringing. "They thought it was the most amazing thing."

Being able to communicate with the Mill Neck Manor School students in that way, when some of those in their lives may not be able to, “it meant a lot,” he said. “The message that we wanted to bring was: If you know anyone or if you are getting bullied, you’re not alone.”