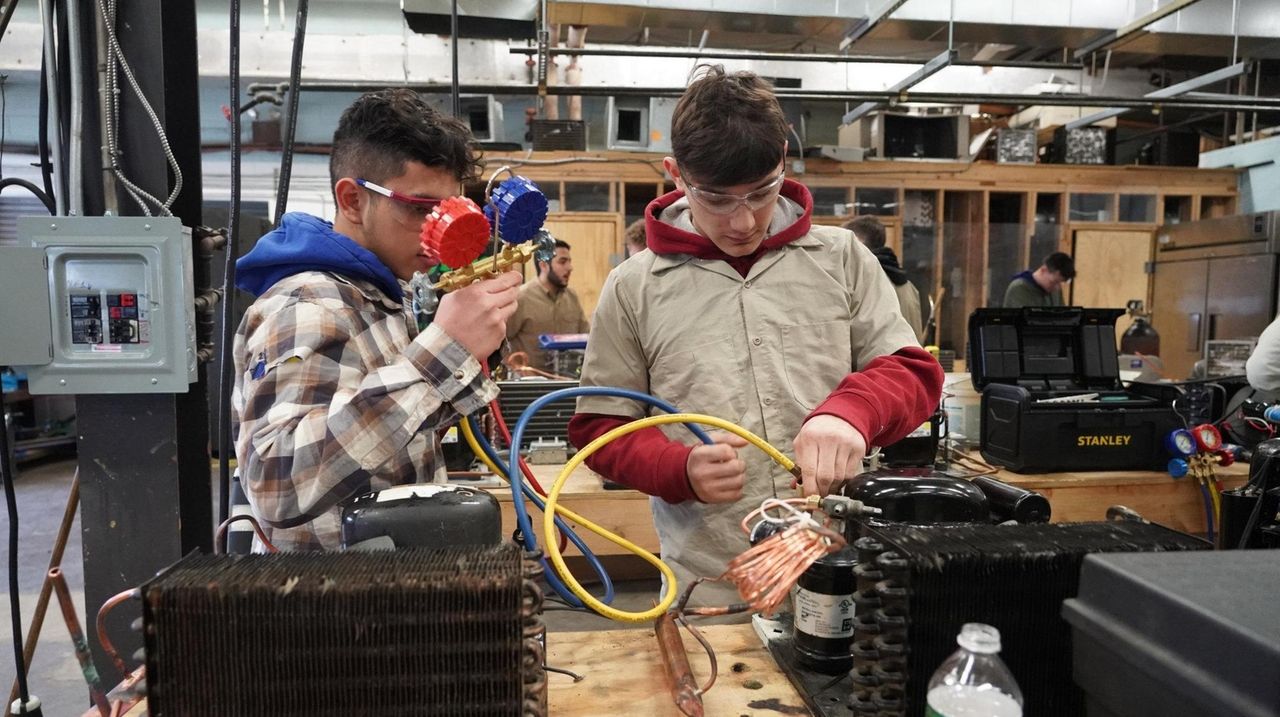 On Long Island, the complexities of graduation standards will be revisited this month, when hundreds of school administrators, teachers and others gather for regional workshops, sponsored by the state's Board of Regents. The first meeting is scheduled Wednesday at an Eastern Suffolk BOCES center in Holtsville, the second March 27 at a Western Suffolk BOCES facility in Wheatley Heights.

The stated purpose of the conferences is to air fundamental questions — for example, "What do we want students to know and to be able to do before they graduate?" Ideas expressed will be incorporated into what the state describes as a "thoughtful" process of revising graduation requirements that could take more than two years to complete.

Underlying the general debate is the specific issue of Regents exams, which have been administered here in one form or another for 155 years, and which some critics regard as insurmountable barriers for large numbers of would-be graduates.

Jeanette Deutermann of North Bellmore, a leading regional parent advocate, favors a reduction in the number of Regents exams required for students to take before they graduate. As a substitute, Deutermann would like to see greater use of classroom projects in determining students' readiness to exit school.

"Standardized tests only narrow the curriculum," said Deutermann, who hopes to express her views at the March 27 conference. "I guess I have more faith in teachers that, if they were unshackled from standardized tests, they would come out of the box and teach in more innovative ways."

Such arguments rankle others, who contend that traditional exams remain essential for determining whether students have absorbed enough historical and scientific facts to function as citizens and taxpayers.

"First of all, they need to keep the Regents exams," said Gloria Sesso, a recently retired social studies supervisor in the Patchogue-Medford district who plans to attend the March 27 meeting. "The minute they start to eliminate a test, they go after history and social studies first. And the reason for that is they don't value the history of our country."

Sesso, who still serves as co-president of the Long Island Council for the Social Studies, speaks from personal experience. In 2015, the Regents board unanimously agreed to let students who wanted to graduate with concentrations in technical courses, the arts, or other selected subjects to get a waiver from taking one Regents exam.

Instead, such students can now get credit toward graduation by passing an occupational or technical test in their area of concentration. The effect of this was to reduce the number of students taking Regents history exams, since other state tests in English, math and science remained mandatory.

The state refers to these alternate routes as "new pathways."

The occupational waiver was followed in 2016 by another measure, allowing students to appeal scores on Regents exams ranging from 60 to 64. The usual passing mark is 65.

Meanwhile, graduation rates continued inching up. Last month, state education officials announced that 81.2% of 12th-graders statewide had graduated in June, up eight-tenths of a percentage point from the previous year.

On the Island, 89.1% of students graduated, an improvement of seven-tenths of a percent.

In Albany, Cuomo's website states that the annual graduation rate "has increased every year and has now reached the highest level in state history."

That's true, but it glosses over the fact that New York could have a tough time catching up with leading states, so long as its gains are less than one percentage point a year.

One point emphasized by eduction officials in recent years is the number of students graduating through "new pathways."

For the Class of 2019, more than 13,200 students took this route statewide, a 15% increase from previous years. Popular areas of concentration included science, math and technical courses.

Such is not the case in the Nassau-Suffolk region, where the number of graduates in alternative pathways has remained more-or-less flat at around 1,500 in recent years. Local experts in the field of occupational training say lack of growth may reflect the fact that the great majority of high school students here remain focused on preparing for college.

Among them is Jennifer Martino, principal of the Edward J. Milliken Technical Center in Oakdale. The center, run by Eastern Suffolk BOCES, trains 750 students for technical jobs such as medical assistants and air-conditioning installers.

Typically, students spend half their school day at the regional Milliken center, and the other half in their local high schools. Martino said she gets two or three calls each spring from such schools, asking if particular students have passed their occupational tests.

The reason, Martino added, is that the students have failed a Regents exam, and need the occupational credit to get their diplomas.

"It could potentially be the determining factor in whether they graduate," she said.

Search graduation rates in your districtLong Island's high school Class of 2019 had a graduation rate of 89.1%, according to state Education Department data.

3:04 Nassau DA: Doctor charged with murder in death of 5 patients
4:01 COVID-19: From 799 deaths in one day to path back to normalcy
State sees decreasing virus positivity, but LI yields higher rate
Brookhaven dumps plan to build ashfill to collect burned trash
Port Authority: Airport travel down 73% from pre-pandemic times
44:58 Panel: Standardized tests must inform instruction
Didn’t find what you were looking for?