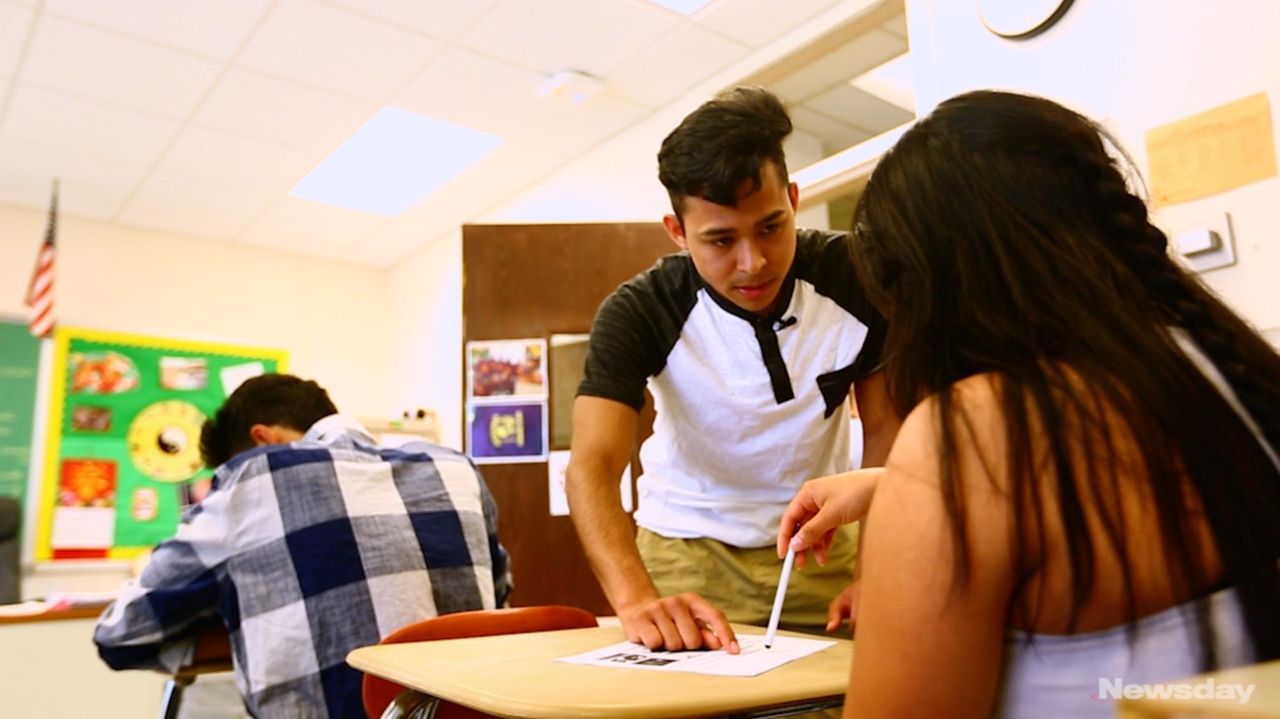 Steven Vasquez decided to focus on his education when his family moved to the United States from El Salvador. In addition to his classwork, he helped his language with YouTube tutorials, network news and TV sitcoms. Now fluent in English, he is active in track, advanced placement classes at Hicksville High School. The highlight of his high school years, however, was being chosen to represent the student body during Supreme Court Justice Sonia Sotomayor's May 2016 visit to his school. He spoke of his plans to attend Nassau Community College on Wednesday, May 24, 2017. Credit: Newsday / Chris Ware

Steven Vasquez made a big decision when he moved from El Salvador to the United States with his family three years ago: He decided to make education his main priority.

He spoke no English and only knew basic nouns like ‘door’ and ‘mother.’ When Vasquez, 19, of Hicksville, wasn’t in school or at one of his two jobs as a hotel lobby cleaner or warehouse worker, he supplemented his English as a Second Language classes with a self-administered education of YouTube tutorials, network news and TV sitcoms like “The Big Bang Theory.”

Varsity track, AP classes and other activities also filled up his days. He is now fluent in English and even mentors peers. Last year, he was elected to Boys’ State, a summer leadership program sponsored by the American Legion. This year and in 2016, Vasquez was chosen to attend the Puerto Rican/Hispanic Youth Leadership Institute held in Albany.

But none of that is the highlight of his high school years. That designation is reserved for the time he was chosen to represent the student body during Supreme Court Justice Sonia Sotomayor’s May 2016 visit to his school.

“I couldn’t stop thinking about how I went from such a bad place to meeting with this amazing person,” Vasquez said. “I went from being an 8-year-old selling vegetables with my mom on the street to talking to Sonia Sotomayor.”

He said Sotomayor told him that it was definitely a challenge to fight prejudice, but advised him not to let anything keep him from his dreams, because “there is always a better future.”

Vasquez, who hopes to have a career in public service, said he has taken the justice’s advice to heart and feels a responsibility to the Hispanic community to do well.

“There a lot of people that believe the bad things being said about my community,” Vasquez said. “If one of us does wrong, then all of us are blamed for it.”

His experiences have shaped him into an advocate for immigrants’ rights. Vasquez said he wanted to speak out about what his family has gone through in their yearslong effort to secure working papers and proper documentation. For a long time, he said his family lived in fear that their application for work permits would be denied. They secured the permits and are waiting to receive green cards.

He has become a strong proponent for the Development, Relief and Education for Alien Minors (DREAM) Act, which proposes conditional residency for those in the country illegally.

“It [lack of documentation] should be resolved in a human manner, thinking about the people who are affected,” Vasquez said. “Why don’t you just give them a chance?”

Vasquez will attend Nassau Community College in Uniondale, where he hopes to study political science. He said he chose to stay close to home to continue supporting his family and acting as his mother’s English translator.

“He is a wonderful example of what perseverance, determination, setting goals and having a dream can do not only for immigrant students but for all students,” said his guidance counselor, Patricia Aliperti.

IF I RULED THE WORLD: Vasquez said he would “help eliminate the barriers to overcoming adversity and the lack of opportunities for so many people, especially in places like El Salvador, my home country.”