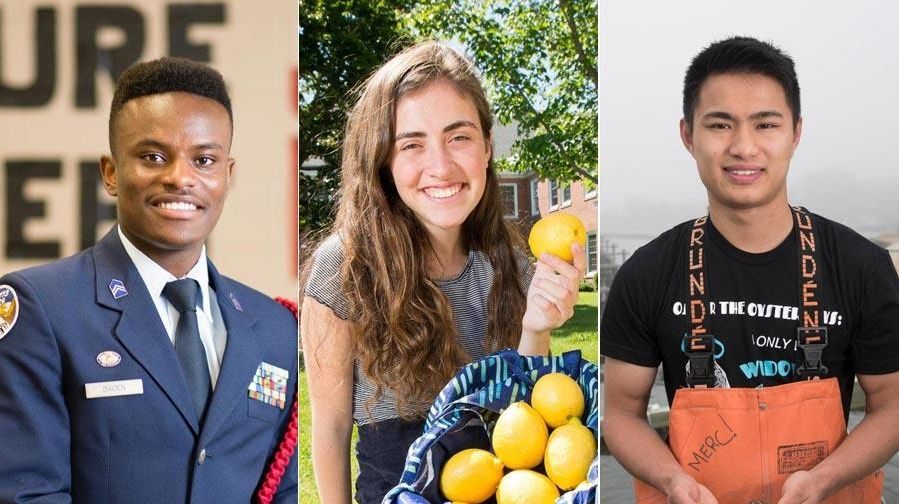 Each year, Newsday receives nominations from principals, teachers and guidance counselors in Nassau and Suffolk counties about students who exemplify the best of qualities: Kindness, perseverance, humility, thoughtfulness, determination, altruism. Here are some of the students that reflect those qualities. Credit: Newsday / Khristopher J. Brooks/Janelle Griffith

As a young boy, Samuel Baiden watched as U.S. soldiers flew into his homeland of Ghana to assist civilians during times of crisis.

Baiden was so thankful for their presence that, in 2013, he finally summoned enough courage to talk to one of those uniformed strangers. He was on a semester vacation from school and decided to get some extra tutoring in math. On his usual 10-minute walk to school, he came upon a soldier who had left camp on a break.

The conversation started with Baiden complimenting the soldier’s uniform.

It was a short conversation because Baiden, now 18 and a resident of Brentwood, hadn’t learned to speak English well. Still, that interaction set him on a path from Ghana to Long Island, and soon, to college in Manhattan.

Brentwood High’s staff said they will miss Baiden and his optimism.

Baiden moved to New York from Ghana when he was 15, with his mother and 4-year-old brother, for a better life. At school, he befriended a graduating senior named Esther, another Ghana native. She told Baiden about Junior ROTC and how it helps lead to a career in the military.

Fasano said she will never forget the first time she met Baiden.

“He came in kind of wide-eyed and unsure, but he just assimilated so well,” Fasano said. “He came in here from day one and said, ‘This is my plan. I want to go into the military because the military helped my country.’ ”

Baiden enrolled at Brentwood as a sophomore, then joined the school’s Junior ROTC shortly thereafter. He became a staple in the program, contributing to the Junior ROTC choir, drill team, cheer team and rocket-building club.

In his two years at Brentwood, Baiden also has written for the school’s literary magazine and made the honor roll. Outside of school, he visits the local nursing home to sing to residents and helps feed the hungry at The Long Island Ghana Church.

“We had to run a mile; we had to do push-ups; they showed us how to march and salute; it was amazing,” he said.

FRESHMAN YEAR: Baiden said he is looking forward in college to “getting to understand the different system, transitioning from high school to college and getting to know new people and getting involved in a lot of activities like I was in high school.”

IF I RULED THE WORLD: “I would get every poor person in the streets up and becoming successful.”