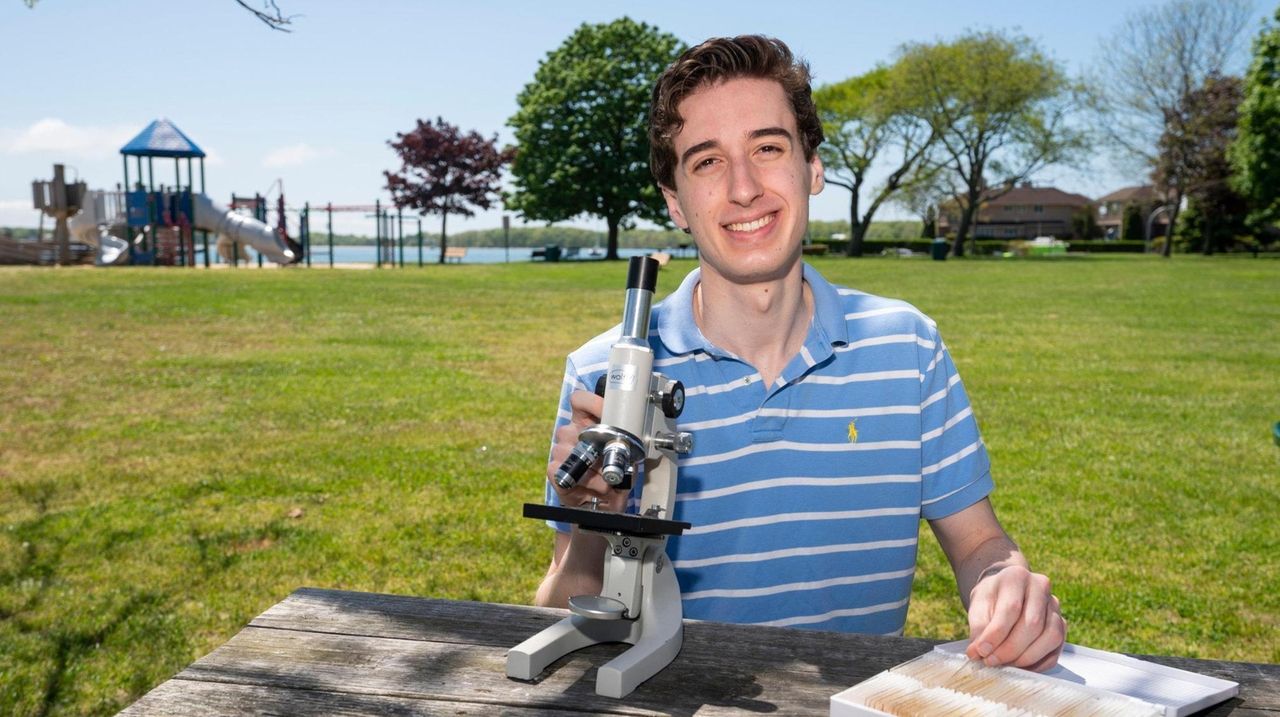 Greenport High School senior Joe McInnis has been studying a deadly virus that may be causing honeybees to leave their colonies. Credit: Randee Daddona

Joe McInnis' research on honeybees is certainly creating a buzz.

Gregg suspected that iridovirus, which suppresses the immune system, could be infecting honeybees and keeping them from returning to colonies. The ailment ultimately results in economic loss for farmers since many crops worldwide depend on pollination, McInnis explained.

Together, the science-minded teen and the retired pathologist spent four years working in a corner of Gregg's piano repair workshop, where they infected bees and sliced them open using a microtome to look for evidence of the virus. The research was conducted using hundreds of honeybee larvae, a majority of which were donated by Salt Air Farm in Cutchogue.

"We wanted to try to prove this virus could at least exist in the hive," McInnis, 18, said. "There was a hole in the research where this scientific paper that discovered iridovirus was being rejected by the entire scientific community, because they didn't trust the way the experiment was conducted."

Since proving the virus could exist, McInnis has presented at places ranging from National Public Radio to the New York State Histotechnological Society, where he was the youngest speaker at their annual conference in 2018. He also received "highest honors" two years ago at the Long Island Science Congress in 2018 and placed first in his division last year at the New York State Science & Engineering Fair.

Most recently, he learned his research will be published this summer in the peer-reviewed journal Southwestern Entomologist.

"It is rare for a high school student to get published in any scientific journal," Gregg said. "This is seminal research and a significant finding in this field."

McInnis is also his class valedictorian, with a weighted GPA of 101.61, and has been class president for all four years in high school; other positions include editor-in-chief of the school newspaper and founder of the school's History Club.

"Joe was always intelligent and kind, but with his research and accomplishments in high school he has become confident beyond his years," said his guidance counselor, Brandi Hopkins.

FRESHMAN YEAR: "A great education is really at the heart of it, but I think meeting new people is what I'm most looking forward to."

DURING THE PANDEMIC, I LEARNED: "It's really critical that we listen to the scientists in times like this, because they know what they're talking about."

Michael Ebert is an education researcher and has worked for Newsday in various capacities since 2003. He was part of an 11-person team named 2008 Pulitzer Prize finalists for investigative coverage of the LIRR's platform safety issues.