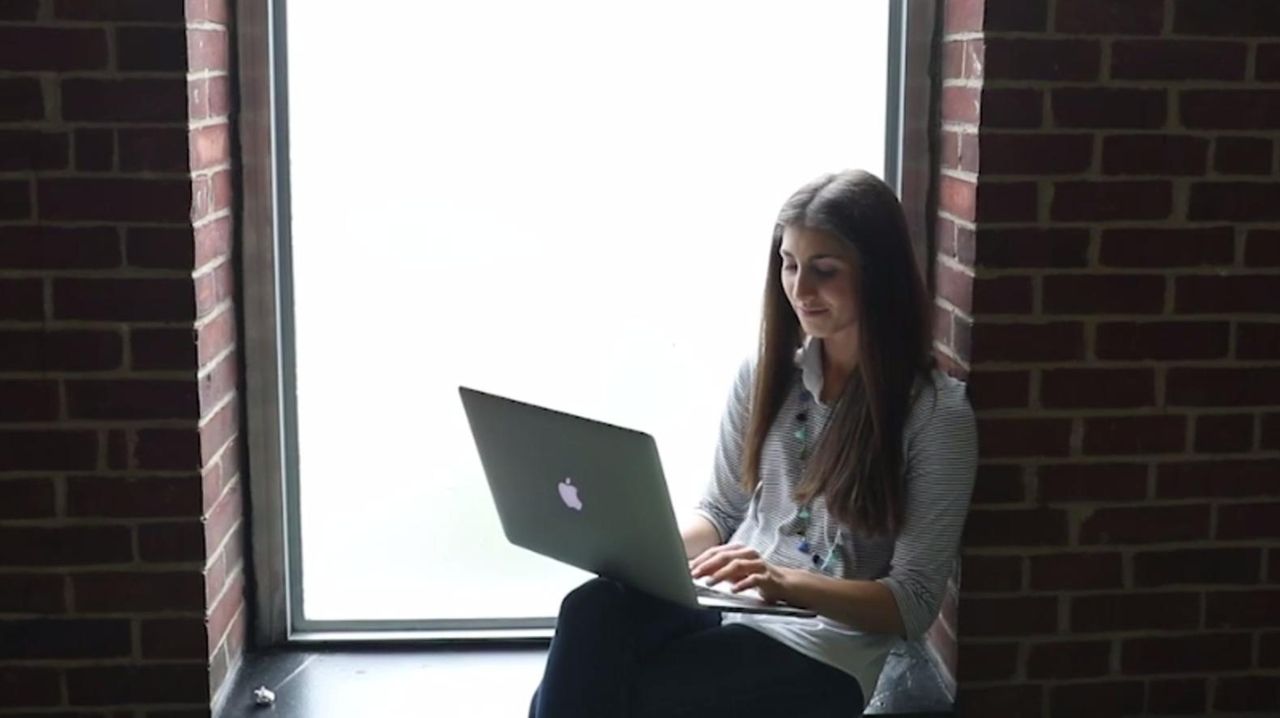 Samantha Lustberg, 18, of Jericho, created a social media awareness campaign in middle school and expanded it once she got to Jericho High School to address cyber bullying. Her program, Think Quick Before You Click, educates students and parents. After learning first hand the effects of being bullied online, she struggled and bounced back. "I see kids react to what I'm saying," Lustberg said. "Even if I only reach one kid, I've done my job." She plans to enter the University of Texas at Austin to study business. She talked about her accomplishments and goals on May 23, 2017. Credit: Newsday / Chris Ware

Being a good digital citizen is serious business for Samantha Lustberg, so much so that she developed a social media awareness campaign in middle school and expanded it once she got to high school.

Think Quick Before You Click was designed to address cyber bullying in middle school and, to further the message, Lustberg moderates panels on bullying’s harmful effects and educates parents of middle schoolers and those in high school on how to navigate popular social media sites such as Twitter and Facebook so they can keep watchful eyes on their children.

As Lustberg matriculated at Jericho, she created a sister program called Social Media Awareness Art, or SMAArt, geared toward students at her high school. The club uses art to spread awareness of various social media platforms and encourage safe cyberspaces. Despite her efforts, the Jericho resident was a victim of trolling and online bullying a couple of years ago. Lustberg said that initially, the incident gave her a “lack of confidence but eventually made me stronger.”

Soon, she was back doing what she does best — spinning a negative into a positive.

“I see kids react to what I’m saying,” Lustberg said. “Even if I only reach one kid, I’ve done my job.”

The task is daunting. Deaths and incidents related to cyberbullying are hard to track because of underreporting by schools and victims. The U.S. Department of Education has no data on the number of teen suicides linked to cyberbullying, but incidents in recent years have drawn more attention to the issue. In November 2016, Texas City, Texas, resident Brandy Vela, 18, shot herself in front of her family after being cyberbullied. In March, two people were arrested in connection with her death.

In October 2003, Vermont resident Ryan Halligan, 13, hanged himself in his family’s bathroom after being cyberbullied and taunted by schoolmates who tricked him into thinking a popular girl liked him and sharing instant messages with her that were then shared with her friends. Seven months later, Vermont enacted its Bully Prevention Law.

School administrators describe Lustberg, who is captain of the varsity soccer team, as humble, kind and courageous.

“She’s a face to cyberbullying, educating parents on the topic,” said her guidance counselor, Mary Jo Moriarty. “She walked into my office in the ninth grade wanting to make changes in the middle school, and she did it.”

Lustberg also has a passion for promoting environmental change, increasing sustainability and helping find a cure for pancreatic cancer. She is vice president of Jericho’s Future Business Leaders of America club and recently took top prize in the club’s national competition in the E-Business category, and first place statewide in the Business Ethics category.

After her late grandfather’s diagnosis of pancreatic cancer, Lustberg took on another challenge by studying the cause and effects of the disease as if it was a homework assignment. In 2015, she participated in the annual Lustgarten Foundation’s Pancreatic Cancer Walk at Jones Beach. The following year, she recruited 75 people to walk for Team Poppy in honor of her grandfather, and raised $30,000 for pancreatic cancer research.

She considers it the crowning achievement of her young life. In August, a new life chapter begins at the University of Texas in Austin, where Lustberg hopes to join the business honors program.

“Texas is a whole new world,” said Lustberg, who added she is looking forward to experiencing new cultures, possibly getting involved in new clubs and self-governing.

IF I RULED THE WORLD: “I would give the world a more positive atmosphere. I would bring people together and have people learn from each other.”