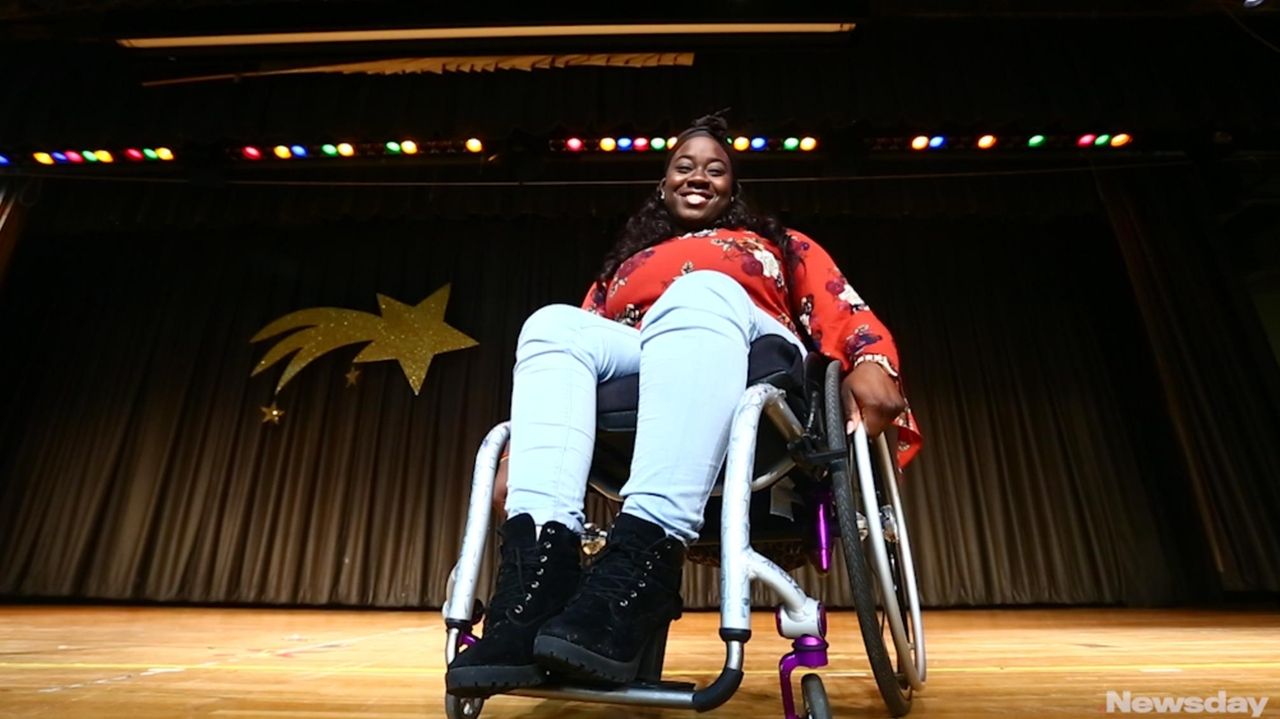 Being disabled doesn't mean being incapable, said 17-year-old Destini Mitchell-Murray on Friday, May 26, 2017. "I can still do the same things in life that I would like to achieve," she said. "Disabled or able-bodied, it doesn't matter." Seriously injured in a vehicle crash in 2007, she said adjusting to a wheelchair was difficult at first, but now it doesn't matter. Mitchell-Murray plans to attend Hostos Community College in the Bronx for two years to study business, then hopes to transfer to LIM College in Manhattan. Credit: Newsday / Chris Ware

When Destini Mitchell-Murray talks about her future, there’s little doubt about her determination. Like her first name, her plans are to her a conclusive fate that she will achieve despite any obstacles in her path.

“Just because I’m disabled, I can still do the same things in life that I would like to achieve,” she said. “Disabled or able-bodied, it doesn’t matter.”

Mitchell-Murray, 17, has attended the Henry Viscardi School — it is in Albertson and educates students with severe physical disabilities such as cerebral palsy, spina bifida and spinal muscular atrophy — for the past nine years. In 2007, she and her family were in a car crash while returning from a vacation. The car flipped three times, and Mitchell-Murray got tangled up in a seat belt. Her spine was “snapped in half” she said, and she was left a paraplegic.

Mitchell-Murray, who lives in Manhattan, said adjusting to life in a wheelchair was difficult at first, but she was adamant that she would not feel sorry for herself.

“Just because I’m in a chair, it doesn’t stop me because I can still continue on with life,” she said.

Still, she did have one fear about being disabled.

“I thought I would not make friends or anything, or I was going to be made fun of,” she said.

But instead of retreating into her shell, the naturally outspoken Mitchell-Murray became determined to be social.

“I said ‘OK, I’m in a chair now. Even though I’m disabled I can still be like others,’ ” she said. “I motivated myself that I could do anything if I put my mind to it.”

And Mitchell-Murray has done a lot. She is president of the school’s student council, co-captain of the wheelchair basketball team, a student ambassador and a member of the yearbook committee.

“Spunky, sassy, confident and a force to be reckoned with” is how Monica Snyder, Mitchell-Murray’s guidance counselor at Viscardi, describes her. Mitchell-Murray is a fashion maven who loves to shop and to creatively combine fabrics and articles of clothing to reflect her own unique style.

“I’m the type of girl who likes to wear things in a different way,” she said. “I don’t want to wear what everybody else is wearing.”

Mitchell-Murray said she has applied to Hostos Community College in the Bronx for two years to study business, then hopes to transfer to LIM College in Manhattan to focus on business management. She said she would like to open her own clothing store and also start a modeling agency for those with disabilities.

She’s already supportive in other ways. During basketball games, Mitchell-Murray said she makes sure all of her teammates get a chance to make a shot before she does.

Mitchell-Murray said she is looking forward to college to “start a new journey and meet new friends.” Still, she said she will miss the support of her classmates.

If I ruled the world: Mitchell-Murray said that helping motivate people with disabilities is the one thing she would like to contribute to the world.