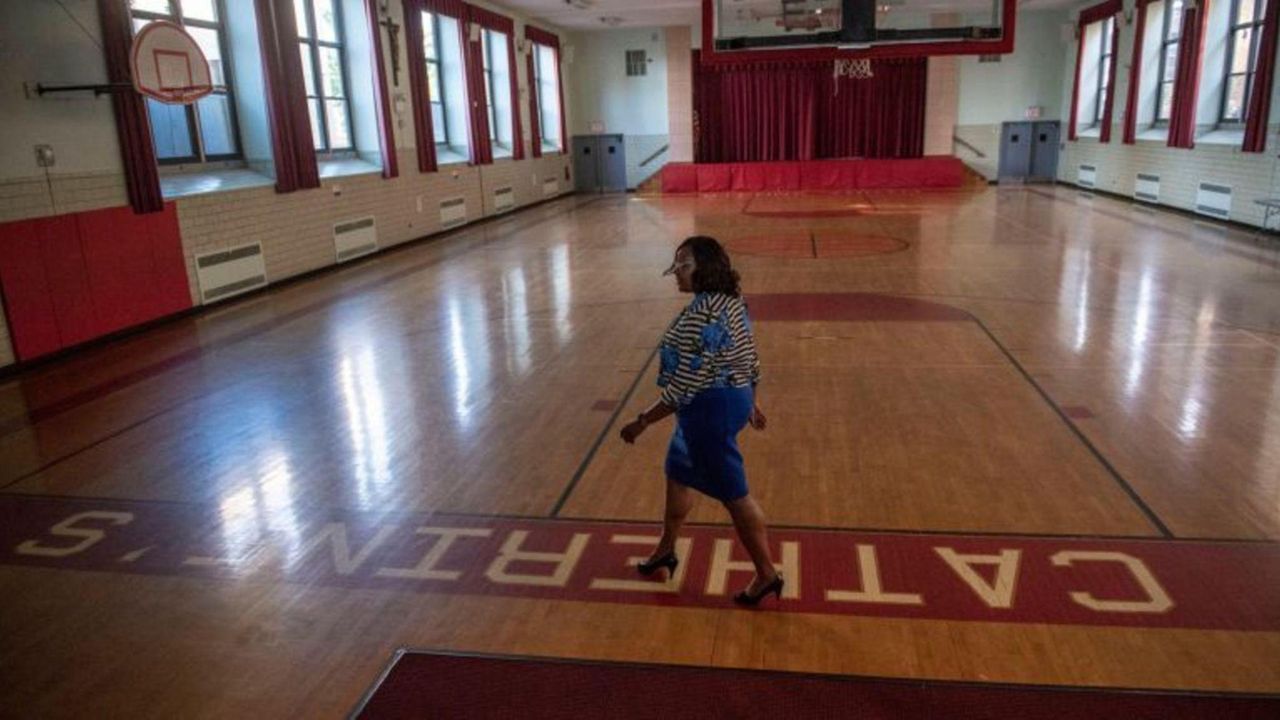 When Hempstead school district officials walked into St. Catherine of Sienna School in Franklin Square earlier this month, they knew it was the perfect temporary home for their kindergarten and pre-K students, displaced because of severe damage to Prospect School stemming from a lightning strike.

The former Catholic school building at 990 Holzheimer St. offers 22 classrooms, a large gym, a spacious play area and a separate cafeteria, acting Superintendent Regina Armstrong said Thursday while giving reporters a tour of the space the district plans to lease for the 2018-19 school year.

“We’re really excited that we were able to find such a nice, move-in-ready space for our pre-K and kindergartners,” she said. “There’s really not that much work at all we have to do.”

The district expects to have about 530 kindergartners and at least 72 pre-K students starting school in September. Because of the circumstances, for those children the start of classes will be pushed back from the original date of Sept. 5. Armstrong said she hopes they can begin the week of Sept. 17, but the date still is tentative.

Hempstead's administrators and school board trustees were sent scrambling to find a location to house the students after lightning struck the Prospect School's roof on Aug. 7. The resulting fire and the water used by firefighters to extinguish the blaze caused significant damage, the cost of which still is being assessed, officials have said. Repairs are expected to be completed by mid-March.

The former Catholic grammar school was one of six schools that the Diocese of Rockville Centre closed in June 2012 because of declining enrollment. It currently is being used by the adjacent St. Catherine of Sienna Roman Catholic Church for offices, as well as some parish organizations and events, but the diocese said there will be no conflict with usage during school hours.

District administrators are focused on communicating information about the change in school venue, Armstrong said.

The school system has contact information for about 90 percent of the Prospect School students’ parents and guardians, she said. The district sent a letter to students' parents this week, is updating its website with new information and will post flyers around the community in upcoming days. Prospect School Principal Carole Eason has been fielding emails and text messages.

In addition, the Village of Hempstead has agreed to help get the word out, with a robocall to residents in English and Spanish, Armstrong said.

Robocalls reach approximately 8,000 households, according to the village.

“In light of the fire at Prospect School we are looking to assist the school district, the students and their families to make the transition to the new school year as smooth as possible,” Mayor Don Ryan said in an emailed statement.

Armstrong described the district's search for the school building as being much like that for a house or apartment. In touring St. Catherine of Sienna and other buildings around the area, she and other officials had to find a location that met the state's specific criteria for housing pre-K and kindergarten students.

It also was important to find a space where all the students could be housed together, so the district could meet requirements for the International Baccalaureate Primary Years program. The authorization process for that program takes two to three years, and among its requirements is the creation of learning communities for students, which couldn't be accomplished if the children were assigned to separate buildings, she said.

"We’re overcrowded as a school district, so we couldn’t just split our kindergarten students and place them in the elementary schools, because those school buildings are already overcrowded," Armstrong said.

St. Catherine of Sienna School was ideal, with its waxed floors, classrooms with desks already set up, and infrastructure that has been kept up-to-date by the diocese, she said.

"It’s all of our kids under one roof, and it gives us enough space to be able to run our full program and not miss anything," Armstrong said. "We wanted to make sure the kids had the same experience someplace else as they would back at Prospect School, and this place will allow us to do that."

As a bonus, the play area at St. Catherine's is larger than the one at Prospect School, and the area for drop-offs and pick-ups is safer, Armstrong said. Only two buses at a time could drop off and pick up students at Prospect School on heavily trafficked Peninsula Boulevard. At St. Catherine’s, all the buses fit on the one-way street off Hempstead Turnpike.

The district will keep the Prospect School students at the former Catholic school through the end of the school year in June as to not interrupt their instruction, Armstrong said

The district must move in furniture, rugs and cots for the nurses' office, and will get equipment for students to use on the blacktopped playground area, she said.

In addition, teachers will be given a small allowance and next week will be able to place orders for things lost in the fire, such as alphabets for the walls, charts and other decorations and learning tools, she said. “We want to make sure they have those special touches to beautify the classrooms."

Hempstead school officials are increasing efforts to communicate with parents of Prospect School kindergarten and pre-K students before their first day of school, which has not been set. The system's students in grades one through 12 are to begin classes Wednesday.