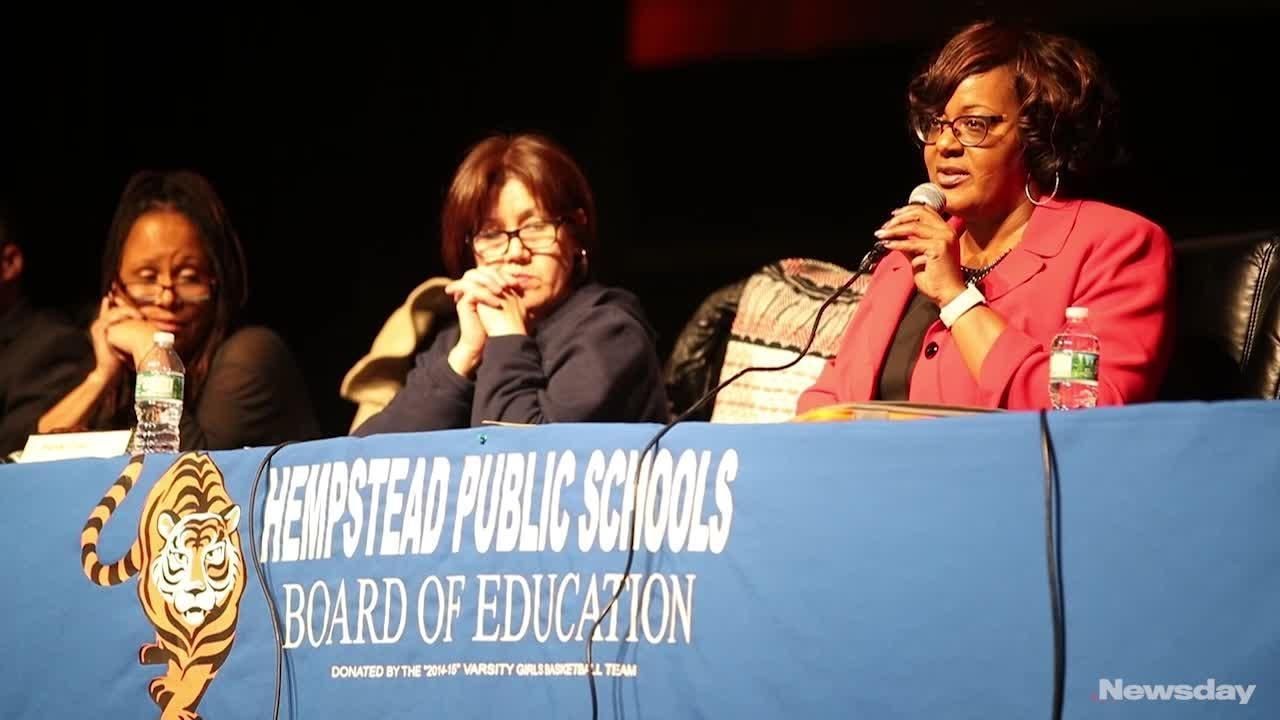 On Thursday, Feb. 1, 2018, the Hempstead school district rolled out a "Course of Action" plan which aims to overhaul every aspect of operations. Credit: Newsday / Raychel Brightman

An ambitious “Course of Action” plan for the troubled Hempstead school district, outlined at a board meeting Thursday night, would essentially overhaul every aspect of operations — from governance to classroom instruction and technology to school security.

State Education Commissioner MaryEllen Elia has ordered the plan’s submission to her by Friday. The five-member school board voted unanimously on Jan. 17 to move ahead with such planning.

The blueprint, drafted by acting Superintendent Regina Armstrong at the board’s direction, lays out a series of steps that, if successful, could eventually remove Hempstead from the state’s list of dysfunctional districts.

Armstrong emphasized the need for building improvements during her 45-minute presentation of the plan and announced that a possible bond issue for construction and renovation would be discussed at a Feb. 15 board meeting.

Hempstead schools: Under the state spotlight

“I am happy to report that we just finished our assessment of all facilities,” she said.

Technically, the “Course of Action” plan is called a response, because it addresses points that Jack Bierwirth, a state-appointed adviser to the 8,000-student system, raised in a wide-ranging report to Elia last month — findings and recommendations that the commissioner approved.

Most steps required under the sweeping new plan would be in place by the end of the current calendar year. Some could require more time — most notably, the formulation and execution of a five-year plan for renovating and expanding school buildings.

Among the required steps highlighted in the “Course of Action” plan reviewed Thursday night:

The overhaul’s success is not guaranteed, because political divisions within Hempstead’s board and the wider community remain deep.

Bierwirth said the evening’s discussion of the comprehensive plan left him hopeful, but added, “It isn’t about hopes, and it isn’t about plans, it’s about whether things are getting done or not.”

One of the blueprint’s features is a precise schedule for when most required corrective steps would begin.

Planning on capital improvements, for example, already has begun. Work on security cameras and door alarms would begin in the summer if funding is provided in the district’s 2018-19 budget, which will be presented to district voters on May 15.

Hempstead’s troubles are long-standing, and some are complicated by socioeconomic factors beyond the control of the school system. Seventy percent of students are economically disadvantaged and 39 percent have limited English skills, according to the state’s latest data.

Other problems, particularly the political infighting, have resulted in escalating intervention by the state.

The most dramatic change took place in September, when Elia appointed Bierwirth to serve as a special consultant to the district, providing guidance to local officials and reporting back to Albany on his findings every three months.

Bierwirth’s job title is “distinguished educator,” and his appointment marked only the second time the state has taken such action.

On Jan. 17, all five board trustees voted to accept the adviser’s 56-page report detailing the district’s weaknesses and recommending changes. At that time, the board directed Armstrong to devise a plan implementing the adviser’s findings.

Bierwirth’s report laid out dozens of recommendations, most of which are reflected either directly or indirectly in the “Course of Action” plan.

Members of the board’s majority have insisted in recent weeks that they take the state’s intervention seriously.

One trustee, David Gates, told Bierwirth on Thursday that he would welcome monthly updates on whether Hempstead is meeting his recommendations.